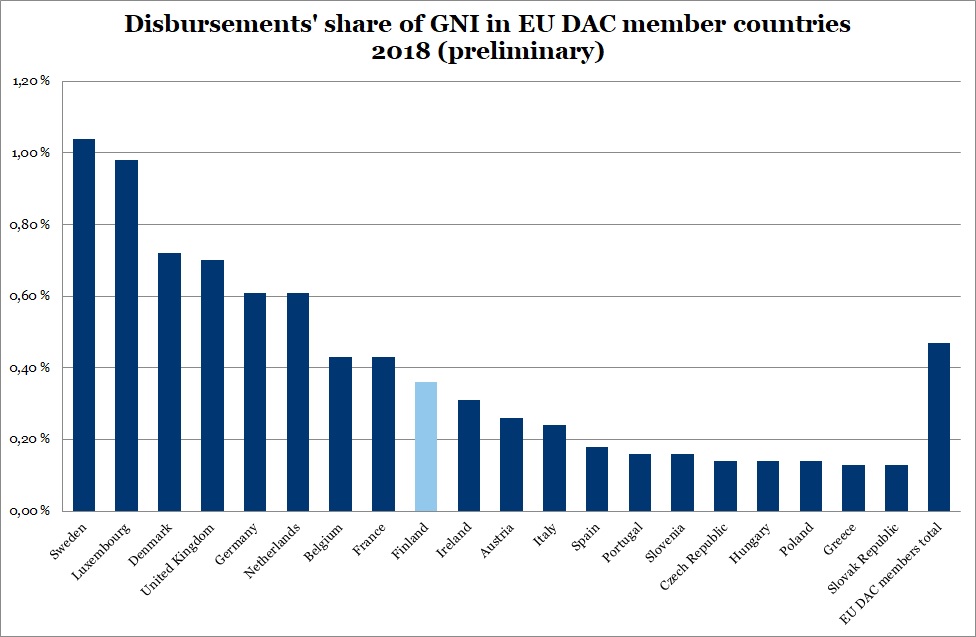 The Organisation for Economic Co-operation and Development (OECD) released its preliminary data for 2018 on 10 April 2019. Finland's development cooperation disbursements accounted for 0.36 per cent of its gross national income (GNI). In 2017, the corresponding figure was 0.43 per cent.

Three principal reasons can be identified for the decrease in the amount of expenditure and the share of GNI. Firstly, Finland's development policy investments fell in real terms by EUR 68 million compared to the previous year. Secondly, costs arising from the reception of refugees and asylum seekers (EUR 48 million) dropped by approximately EUR 20 million compared to the previous year. Thirdly, Finland’s share of the European Union’s development cooperation budget (EUR 136 million) dropped by EUR 26 million from 2017. The actual amount of expenditure in 2018 fell by EUR 129 million compared to 2017.

A significant proportion of Finland’s development cooperation funding was provided through the EU (EUR 216 million) and other multilateral organisations, such as the UN (EUR 152 million) and the World Bank Group (EUR 94 million). In 2018, EUR 84 million was allocated for humanitarian aid. Of the partner countries in bilateral development cooperation in 2018, the four main ones were Afghanistan (EUR 19 million), Ethiopia (EUR 14 million), Nepal (EUR 12 million) and Indonesia (EUR 12 million).

EU financing for developing countries amounted to USD 87.4 billion, which corresponds to 56.4 per cent of all documented ODA and 0.47 per cent of the EU’s GNI. In real terms, the EU’s ODA expenditure decreased by 1.7 per cent from 2017. If the costs arising from refugees and asylum seekers are excluded, the amount of development cooperation increased in real terms by 3.9 per cent from the year before. Finland’s share remained below the average level of the ODA disbursements of the twenty EU countries that are members of DAC. Finland was ninth largest donor among these countries.

Of the 17 DAC Members that increased their ODA expenditure, Iceland, Hungary and New Zealand raised their spending the most. At the same time, ODA expenditure fell in 12 DAC countries. In addition to Finland, decrease of expenditure was seen in Austria, Greece, Italy, Japan and Portugal.  The most common reason for the fall in expenditure was decrease in costs arising from the reception of refugees and asylum seekers.

Preliminary data of the actual disbursements will be updated in the final statistics, for example concerning their allocation to different regions. The share of GNI may change when the revised data published by Statistics Finland are available.

The Foreign Ministry's email addresses are of the format [email protected]