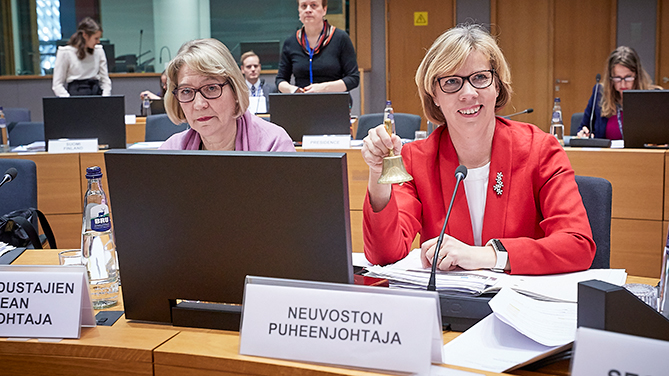 Convening in Brussels, the justice ministers of the EU member states adopted Council conclusions on victims’ rights and had a debate on how to further strengthen the rule of law. Justice issues were on the agenda today, 3 December, on the second day of the Justice and Home Affairs Council.

“Becoming a victim of crime may seriously undermine an individual’s sense of security. To be able to secure victims’ rights better than before, we need to address them more comprehensively. The justice ministers are looking to the European Commission for a new EU-level strategy that would allow us to proceed in the desired direction,” says Minister of Justice Anna-Maja Henriksson, who chaired the meeting.

The adopted Council conclusions call on the Commission to look particularly into the existing EU provisions on compensation to victims when working on its strategy.

The meeting also followed up on the debate launched by the Finnish Presidency on how justice ministers could contribute to the strengthening of the rule of law in the European Union.

“Our common values are the cornerstone of the EU. I am very pleased to note that this important issue now seems to have found its place on the agenda of EU justice ministers. We should do our part to reinforce citizens’ trust in the proper functioning of the rule of law,” Minister Henriksson says.

The Council also adopted conclusions on alternative measures to detention. Exchanging best practices between the EU member states lies at the heart of the conclusions, for criminal sanctions fall in the remit of the member states.

“The European Union and all its member states must be safe for everyone to live in. A well-functioning and credible sanctions regime is vital for our safety and security. Sanctions should be appropriate and proportionate to the severity of the crime. It is essential to use alternative measures to detention whenever they can help the offender readapt to society, thus preventing recidivism,” says Minister Henriksson.

The justice ministers also agreed on updates to two civil procedure regulations in order to facilitate the gathering of evidence and the service of judicial documents across borders through digital solutions.

The final report on mutual evaluations on environmental crime in the EU was presented to the ministers by the Presidency.