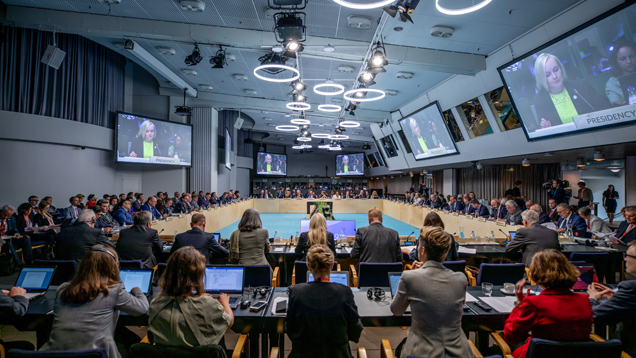 The EU home affairs ministers met in Helsinki on 18 July to discuss internal security and migration. The agenda of this informal meeting also included a scenario-based discussion exercise on how to counter hybrid threats. This was the first exercise of its kind to be organised at ministerial level by Finland’s Presidency.

Towards a comprehensive approach to migration

The first working session of the informal meeting of home affairs ministers focused on the future of internal security. In particular, the ministers examined ways to strengthen operational cooperation between law enforcement authorities, such as the police and border authorities. The debate on the future of internal security will continue throughout Finland’s Presidency and beyond.

The discussion on migration focused particularly on cooperation with third countries, an effective return and repatriation policy, and reform of the EU’s common asylum system. The ministers also discussed the importance to the future of the Schengen area for free movement of having a fair, effective and crisis resilient migration and asylum policy.

"On a more general level, an effective migration and asylum policy is a matter of urgency for the future of the EU. Our discussions show that the member states are determined to push ahead with the reform of the common European asylum system, despite the challenges. Finland’s Presidency will respond to the member states’ call to take this reform forward in a spirit of constructive cooperation," Minister Ohisalo said.

The meeting featured a policy debate between the home affairs ministers based on a fictitious scenario involving hybrid threats. The idea was to increase the ministers’ awareness of such threats, particularly from the internal security perspective. In dealing with hybrid threats, internal and external security are inextricably linked, which means that these threats tend to occur at the interface of the two dimensions of security. The purpose of the hybrid threat exercise was to enhance the preparedness and capacity for mutual assistance of EU Member States and to strengthen existing mechanisms for cooperation and coordination. A further aim was to strengthen the ability of the EU and the member states to respond to threats related specifically to chemical, biological, radiation and nuclear materials (CBRN threats).

"It is important to assess hybrid threats from the point of view of internal security actors. Although the member states themselves bear prime responsibility for countering hybrid threats, many of them face common threats that can be addressed more effectively through coordinated EU action. Today’s debate will contribute to strengthening the capacity of the EU and the Member States to prepare for and intensify their response to hybrid threats," Ohisalo said.

The home affairs ministers’ exercise was one of a series of scenario-based discussions to be conducted during Finland’s Presidency. The discussions, held at both ministerial and senior officials’ level, aim to enhance EU capabilities, increase awareness and boost EU cooperation.