Do you know where Government spending goes in Finland? 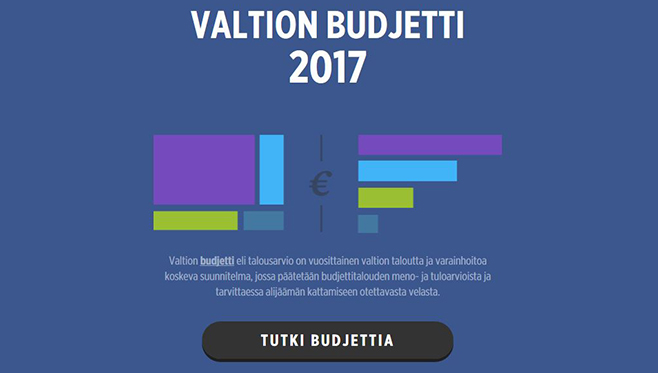 How much of the central government’s Budget goes on transport infrastructure? And on child benefit? Clear answers to these questions can be found easily from a single website: Tutkibudjettia.fi.

The Ministry of Finance today published its new visual, interactive service, Tutkibudjettia.fi, which lets users take a look inside the Budget. It allows you to conveniently explore details of the Budget’s revenue and expenditure categories. The information is presented in an easy visual form that can be understood quickly.

Government revenue and expenditure presented in a new way

The aim of the service is to present Budget information in an appealing and understandable way. The interactive nature of the service encourages users to find out more about the contents of the Budget.

Tutkibudjettia.fi presents the central government sector revenues and expenditure (the ‘on-budget entities’). The service includes information from the 2014 Budget onwards. The visualisation covers not only the Government’s budget proposal issued each year in September but also the final budget determined by Parliament in December (parliamentary communication). The visualisation of the Budget does not include supplementary budgets.

Users may also proceed from the main level to deeper levels within the service. Expenditure, for example, is presented at the ministry level down to smallest components of appropriations, known as budgetary items. The user is able to examine the data in euros and to see what has changed since the previous Budget.

Besides the Budget itself, the service also presents figures on various themes. These themes allow you to take a closer look at areas of topical concern or which are otherwise of interest. The appropriations relevant to each theme, down to the level of complete items, are presented together under the theme headings and may be from the administrative branches of one or more ministries. The themes cover a wide range of subjects, such as higher education, transport infrastructure, war veterans and agriculture.

The open data is currently available only in Finnish, which means that the Tutkibudjettia.fi service is also only available in Finnish.