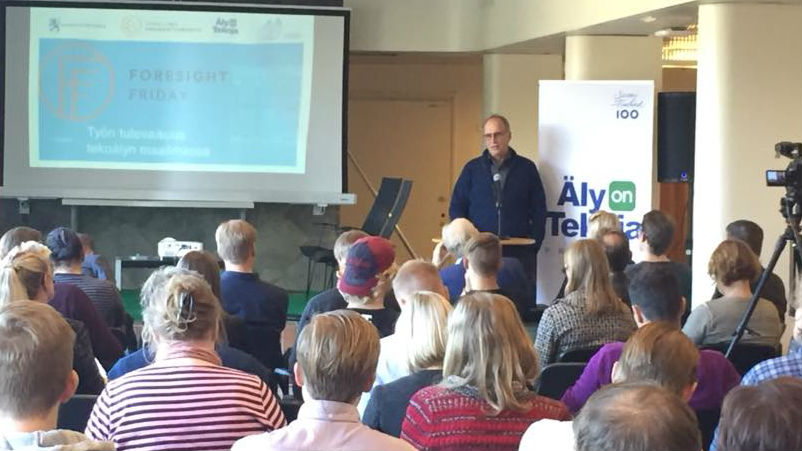 Artificial intelligence is expected to change societies even more dramatically than digitization. In the future artificial intelligence will be present in the daily lives of all people and in our homes. The impact on how we work will be great indeed. Some occupations may disappear, while the demand for new kinds of expertise will be growing. These are the key conclusions of the Foresight Friday event of the National Foresight Network and "Äly On Tekoja" project on 7 October. The event also contributed to the preparation of the Government foresight report.

The experts who participated in the event told that the introduction of artificial intelligence solutions is going to have significant impacts on the lives of each and every Finn in the coming decades. This will be reflected in all walks of human life from working life structures to transportation and healthcare to copyrights. In the future applications based on artificial intelligence will run errands for us and see to many of the daily chores in our homes.

A member of the "Äly On Tekoja" project, former Technology Director at Nokia Tero Ojanperä pointed out that in preparing for the change everyone should give some thought to the impacts and opportunities relating to artificial intelligence in their own fields. Updating the legislation will be highly important. Ojanperä sees the government's role in the future development to be that of a facilitator.

- The State should open its data reserves to third parties and stop developing the services. We could have a "state-as-a-service", but the State need not focus on the actual development work on artificial intelligence. Entrepreneurs and researchers are well capable of creating the ideas for Finnish solutions and services and putting them to practice, says Tero Ojanperä.

Challenges from changes in working life

There was a lot of discussion on the impacts of robotics and artificial intelligence on working life. The transformation of work and disappearance of jobs will create major challenges. Antti Palola, Chair of the Finnish Confederation of Professionals, reminded that the rules of the game of our welfare society are still important. He said that, for example, we must continue to secure good education, even if individuals will have more responsibility for maintaining and improving their competences.

- Individuals who are the best in applying information will succeed in the future, and competence is the best security for the people in the face of changes. However, if the rise of artificial intelligence reduces the number of taxpayers, the rules of the game of societies need to be rethought to preserve the welfare society, Palola says.

The panel discussion concluded that the more quickly Finland is capable of utilising artificial intelligence applications and new technologies, the higher value potential they will have. Research Director Jari Kaivo-oja from the University of Turku stressed that speed and agility are most important when new technologies are being introduced. As examples he mentioned urban transportation, translation robots, and healthcare and social welfare applications.