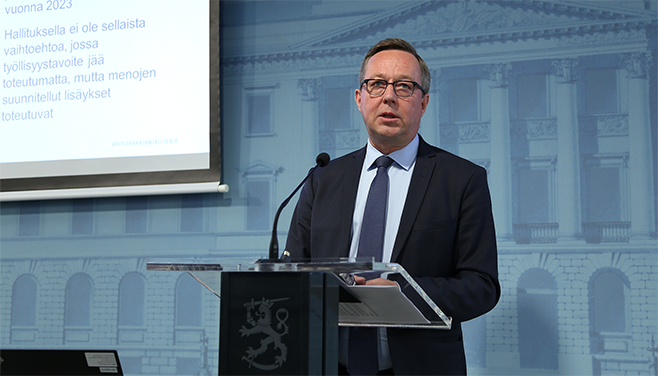 Minister of Finance Mika Lintilä’s draft budget for 2020 will strengthen the confidence felt in the future by individuals and businesses at a time when uncertainty about the global economy is growing. The proposals in the draft budget total EUR 57.0 billion and are based on the Government Programme.

The budget proposals and the General Government Fiscal Plan are being prepared in a situation where Finland's economic growth is slowing − in the current year and in the next few years. Uncertainty has grown about which way the economy is headed.

Growth in the global economy is slackening, and the euro area and developing economies in particular are experiencing slower growth in 2019. The Ministry of Finance estimated in June that consumption will continue growing steadily in Finland, but that growth in investments and exports is threatening to slow. Employment is also rising more slowly than before.

“In this situation it is vital that we keep the Finnish economy in good shape and take steps to increase employment and investment. We will also strengthen people’s confidence in the future by ensuring fairness and taking care of the environment,” says Minister of Finance Lintilä.

The latest forecasts will be available to the Government in its budget session in September. The Ministry of Finance’s Economic Survey containing revised figures will be published on 7 October.

The aim in making decisions on expenditure and tax is that, given normal global economic circumstances, Finland’s general government finances will be in balance in 2023 and the public debt-to-GDP ratio will decrease.

The objective of the Government's economic and employment policy is that the employment rate will reach a level of 75% in the 15–64 age group in 2023, given normal global and related domestic economic circumstances.

The employment rate will determine whether the objective of balancing general government finances is attained. The first proposals for measures to improve employment are expected from the working groups set up by the Ministry of Economic Affairs and Employment by the start of September. In its budget session, the Government will evaluate the entire package and ensure the sufficiency of the measures.

The Ministry of Finance’s draft budget for 2020 totals EUR 57.0 billion, which is approximately EUR 1.5 billion more than the current year’s budget.

To attain the employment goal, a supplementary appropriation of around EUR 15 million is proposed for TE services. This will ensure the resources are in place for enabling jobseekers to attend periodic interviews and will help implement the youth guarantee. In addition, work permit processes will be streamlined and international recruitment facilitated. These measures aim to respond to labour shortages.

To increase the use of the pay subsidies in companies, an increase of EUR 10 million is proposed for public employment services. An additional EUR 33 million in Business Finland grant authorisations is proposed as support for the creation of new billion-euro ecosystems and innovations in Finland.

The entry to Finland of foreign talent sought by companies will be facilitated by making the so-called key personnel act permanent. At the same time, a moderate lowering of the 35% withholding tax for key personnel is proposed within the cost frame of the Government Programme.

Hetemäki to review measures to speed up investment

As uncertainty is growing about the outlook for the global economy, it is essential to promote measures in Finland that encourage companies to invest. This is also needed in order to attain the Government's employment goal. After the 2008 financial crisis, the low level of investment has been a key bottleneck for Finland's productivity growth.

Minister Lintilä appointed Permanent Secretary Martti Hetemäki to review and report on measures that could speed up investment and could be included in the Government's budget proposal for 2020. The Government will discuss Hetemäki's proposals in its budget session in September.

Investment refers to spending on skills enhancement, R&D and machinery and equipment. The Government’s sustainable development goals will be taken into account. In his work, Hetemäki will consult whichever bodies and experts he deems necessary.

Improving the position of families, students and older people

It is proposed that the position of families be improved in a variety of ways. An appropriation is proposed for municipalities to reduce the group sizes in early childhood education and care and extend the right to early childhood education and care. An increase of EUR 25 per month is proposed for the family provider increment to the study grant. The single-parent increment for child benefits will rise by EUR 10 per month and the income of multi-child families will be improved by raising the child benefits paid for the fourth child and each additional child.

Students’ income will be secured by index-linking the study grant starting from 1 August 2020. It is proposed that basic security be raised by EUR 20 per month, and the lowest pensions will be increased.

The draft budget also includes measures to increase people’s everyday security. Measures would begin for increasing the human resources of the police to 7,500 person-years by 2022. EUR 2 million is proposed as an additional appropriation to increase the number of shelters and to develop this service.

In line with the Government Programme, it is proposed that the amount of funding for nature conservation be increased by a total of EUR 25 million in 2020. The funding will be divided between the Ministry of Agriculture and Forestry and the Ministry of the Environment. The additional funding would be allocated to the voluntary METSO programme, in particular, which is a programme that aims to safeguard forest biodiversity. The funds would also be used by the Natural Heritage Services of the state-owned forest enterprise Metsähallitus to improve recreational opportunities and strengthen the conditions for nature tourism.

Progress will be made towards the climate targets by investing in renewable energy sources, promoting resource efficiency and increasing the share of renewable energy relative to all energy use. Measures will also be taken to accelerate the achievement of climate policy targets in the land use sector. An increase of EUR 30 million in the approval authority for energy subsidies is proposed to support investments in energy technologies to replace coal.

An additional EUR 300 million is proposed for the management of basic transport infrastructure, including roads, railways and waterways. It is also proposed that subsidies for private roads be kept at the current level during the government term. In addition, the level of funding for public passenger transport would be increased by EUR 20 million, and this is intended for climate-related measures.

A supplementary appropriation of just under EUR 72 million is proposed for the exclusive ODA budget item.

As agreed in the Government Programme, taxation of earned income will be reduced by EUR 200 million. The reduction concerns employees, pensioners and benefit recipients in the low and middle-income bands. The solidarity tax will continue until the end of the Government’s term of office. An index adjustment will be made to the taxation of earned income in line with the rise in earnings.

The tax deductibility of interest payments on home loans will continue to be reduced in stages during the Government’s term of office. Next year, 15% of the interest payments on home loans will be tax deductible. As set out in the Government Programme, there will be a moderate reduction in the maximum amount of domestic help credit, from EUR 2,400 down to EUR 2,250. The domestic help credit will be reduced from 50% to 40% of the payment for labour or service, and from 20% to 15% of the payment for wages.

Tobacco tax increases will continue in stages during the Government’s term of office. The increase for next year will be EUR 50 million. The tax on soft drinks will be raised by EUR 25 million in 2020, with the focus on sugar-rich drinks.

As agreed in the Government Programme, taxation on transport fuels will be raised by EUR 250 million in line with the forecast rise in consumer prices. The increase would come into force in August 2020. Benefit increases in basic social security and reductions in the taxation of earned income will compensate for the rise in fuel taxation for low-income earners. Other tax changes concerning energy taxation in the Government Programme will not yet be introduced next year.

The draft budget proposed by the Minister of Finance shows a deficit of EUR 2.3 billion. The allocations for future-oriented investments will be agreed later in connection with the budget preparations. For this reason, their impact on appropriations and the budget balance has not yet been taken into account. The budget deficit estimated for 2020 is about EUR 0.5 billion higher than the deficit of about EUR 1.7 billion for 2019 which was estimated in the summer’s supplementary budget. Central government debt will rise in 2020 to an estimated EUR 109 billion.

The goal is that, given normal global economic circumstances, Finland’s general government finances will be in balance in 2023. The budgetary objectives for central government, local government and the social security funds will be consistent with this goal.
In its draft budget proposals, the Ministry of Finance has incorporated the permanent expenditure increases and reductions set out in the Government Programme. The effect of these measures is that government expenditure will increase in net terms by approximately EUR 1.3 billion at the 2023 level. This does not include a reduction of EUR 100 million in business subsidies, on which a working group is to present its proposals before the government budget session in the autumn. Neither does the General Government Fiscal Plan yet include measures to improve productivity in public services, as these are still to be separately negotiated with the regions in autumn 2019.

The budget planning period estimates of the state of general government finances will be determined more precisely at the time of the government budget session.

Future-oriented investments to be decided separately

The draft budget does not yet include the Government’s one-off future-oriented investments. These will promote employment, productivity in public services, sustainable development and cross-administrative approaches. Proposals for these future-oriented investments put forward by the ministries will be discussed by the Ministry of Finance and the Government later in August and September, and they will then be included in the final budget proposal.

The Government will discuss the budget during the government budget session on 17–18 September. At the same time it will also discuss the General Government Fiscal Plan for 2020–2023.