Minister Mykkänen met a group of US Senators 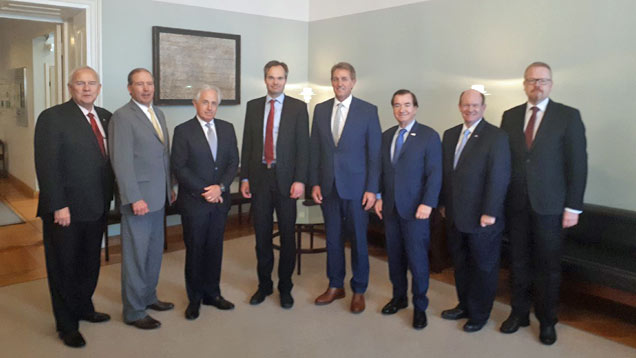 On 4 July, Minister of the Interior Kai Mykkänen met a delegation of US Senators visiting Finland in Helsinki. The delegation of Senators and Minister Mykkänen discussed, among other things, internal security, internet propaganda and hybrid threats. Ilkka Salmi, the newly appointed Permanent Secretary of the Ministry of the Interior, attended the meeting, too.

Minister Mykkänen described the current situation of the EU vis-à-vis immigration and the Union's asylum policy. The Senators were interested in the upcoming meeting between the US and Russian Presidents and the unique relationship between Finland and Russia.

The US delegation consisted of Senators Jeff Flake, Bob Corker, Christopher Coons and Tom Udall and Member of Congress Ed Royce. Robert Pence, the Ambassador of the United States to Finland, also participated in the meeting.