Chairmanship of the Arctic Council nearing its conclusion

The last plenary meeting of the Finnish Chairmanship reviewed the reports and recommendations of the Arctic Council’s Working Groups, discussed cooperation between Working Groups and Observers, and prepared the Declaration of the Ministerial meeting. Representatives of all of the eight Arctic States and six Permanent Participant organisations representing indigenous peoples, as well as observers from Europe, Asia and international organisations, attended the meeting.

The Senior Arctic Officials reviewed the reports of the Working Groups, which dealt, among other topics, with the progression of climate change, the prevention of pollution risks, the reduction of black carbon emissions and the assessment of environmental impacts in the Arctic region. Owing to climate change, the average temperature in the Arctic region has risen by 2.7 degrees between 1971 and 2017. 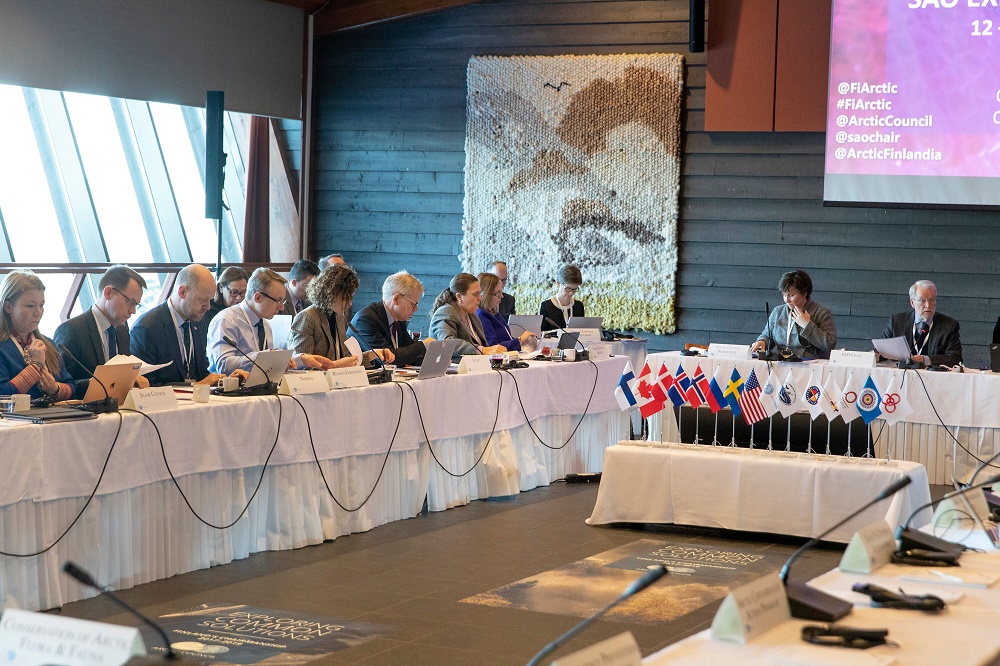 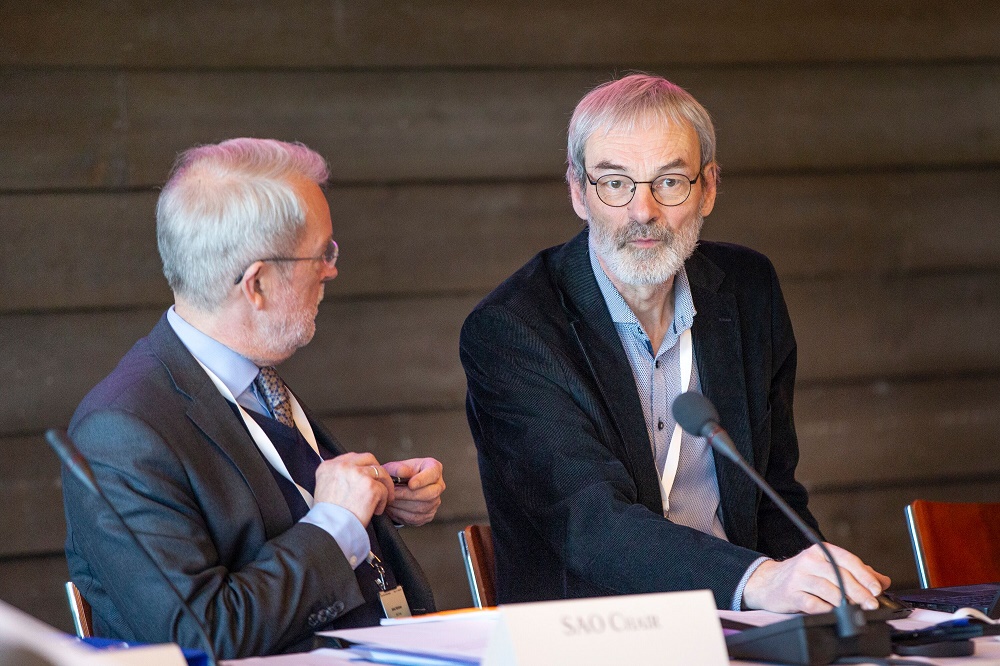 Mikael Hildén (right), Chair of the Expert Group in support of implementation of the framework for action on black carbon and methane (EGBCM), said that black carbon emissions from the Arctic region are declining. Arctic Ambassador Aleksi Härkönen (left) served as Chair of the Senior Arctic Officials. Photo: Kaisa Sirén 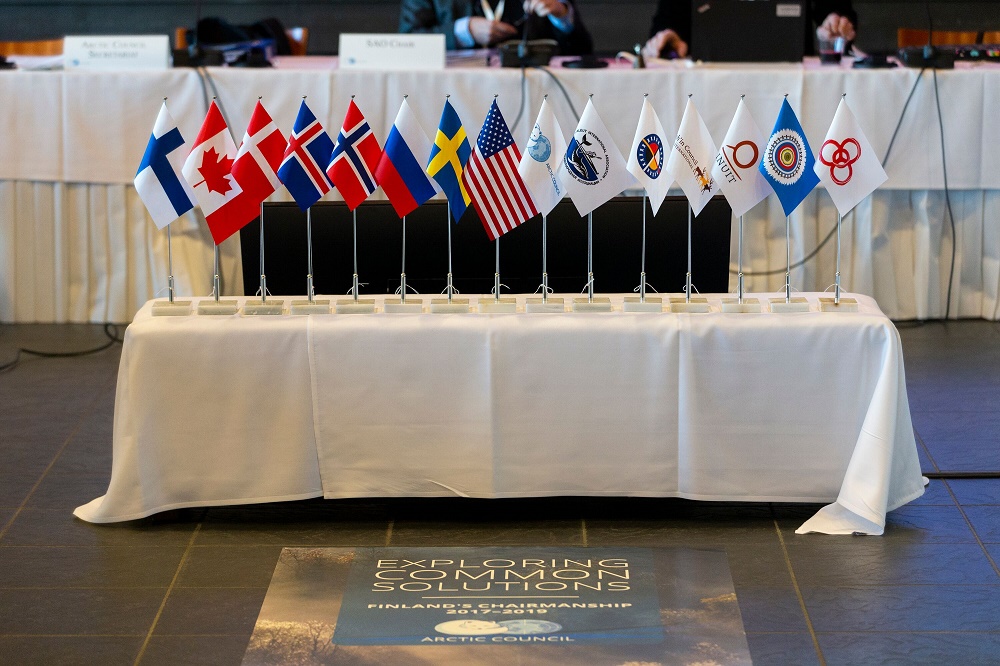 The Member States of the Article Council are Finland, Canada, Denmark, Iceland, Norway, the Russian Federation, Sweden, and the United States as well as the Permanent Participant organisations representing indigenous peoples:  the Aleuit International Association, the Arctic Athabaskan Council, the Gwichín Council International, the Inuti Circumpolar Council, the Russian Association of Indigenous Peoples of the North (RAIPON) and the Saami Council. Photo: Kaisa Sirén

The Senior Officials were also informed of the Council’s work to improve communications in the Arctic. The Working Group recommended, among other things, that States develop their regulatory policies, provide incentives for infrastructure projects and clarify the regulation of the communications sector.

The Council’s Working Groups and Observers discussed cooperation to reduce marine litter and micro and nano plastics in Arctic ocean areas. The world’s oceans contain over 150 million tonnes of plastic waste, most of it from Asian countries. The transport of plastic waste and micro and nano plastics to oceans and the Arctic region can be reduced by improving waste management and control. In addition, the Senior Officials approved a policy outline whereby the Arctic Council will strengthen the handling of marine issues by inviting marine policy experts to its meetings.

Towards the Ministerial meeting in Rovaniemi

The Senior Officials were informed of preparations for the Arctic Council Ministerial meeting, to be held in Rovaniemi on 7 May. Foreign Ministers of the Member States and representatives of the Permanent Participant organisations representing indigenous peoples as well as observers at public servant level will be invited to the meeting. The intention is that a Ministerial Declaration will be signed and future guidelines for the Arctic Council will be decided at the meeting. At the meeting, the Chairmanship will be handed over from Finland to Iceland. During its Chairmanship of the Arctic Council, Iceland will focus on sustainable development, marine issues, sustainable energy solutions and human wellbeing. 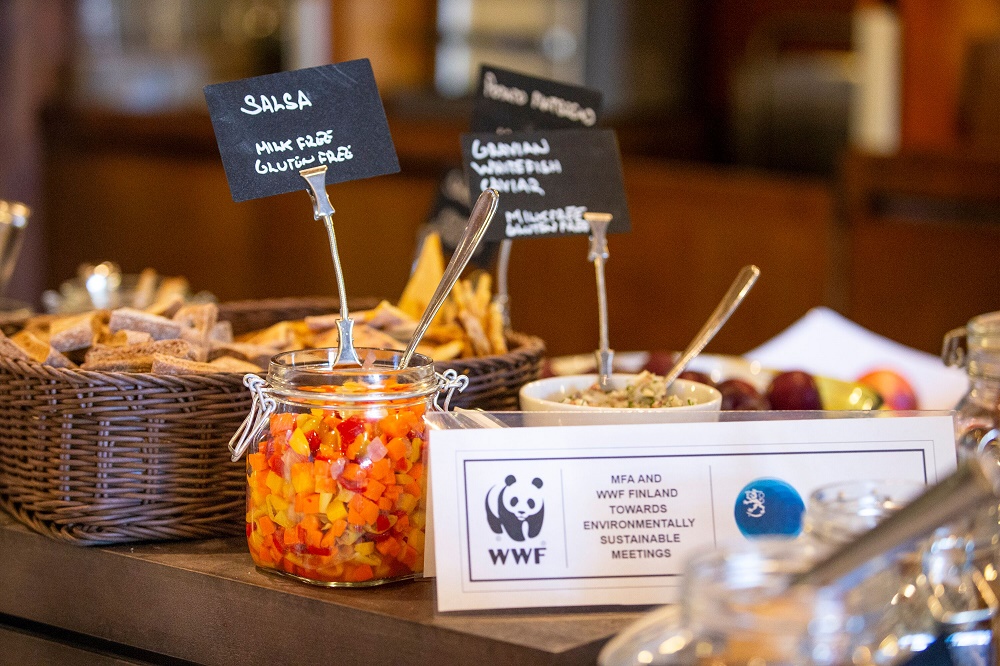 The Ministry for Foreign Affairs has followed the sustainable meeting concept in all of the Finnish Chairmanship’s meeting arrangements. Photo: Kaisa Sirén

A Stamp of Approval (Arctic Council)