Finland’s six-month Presidency of the Council of Europe culminated with the Committee of Ministers meeting, held in Helsinki on 16–17 May. This was the largest ministerial meeting ever organised in Helsinki, with all 47 Member States present at the Finlandia Hall and more than 30 of them represented by the Foreign Minister. Besides the Member States, the six Observer States and certain international organisations had been invited.

Who made it all happen at the Committee of Ministers meeting in Helsinki: Finland’s Council of Europe team. Photo: Riikka Taivassalo.

The agenda also included the Council’s 70th anniversary celebrations, attended by almost one thousand invited guests. Among the honoured guests were large numbers of schoolchildren, young people and civil society representatives. This also gave the opportunity to tell about the important role of the Council of Europe in our society. 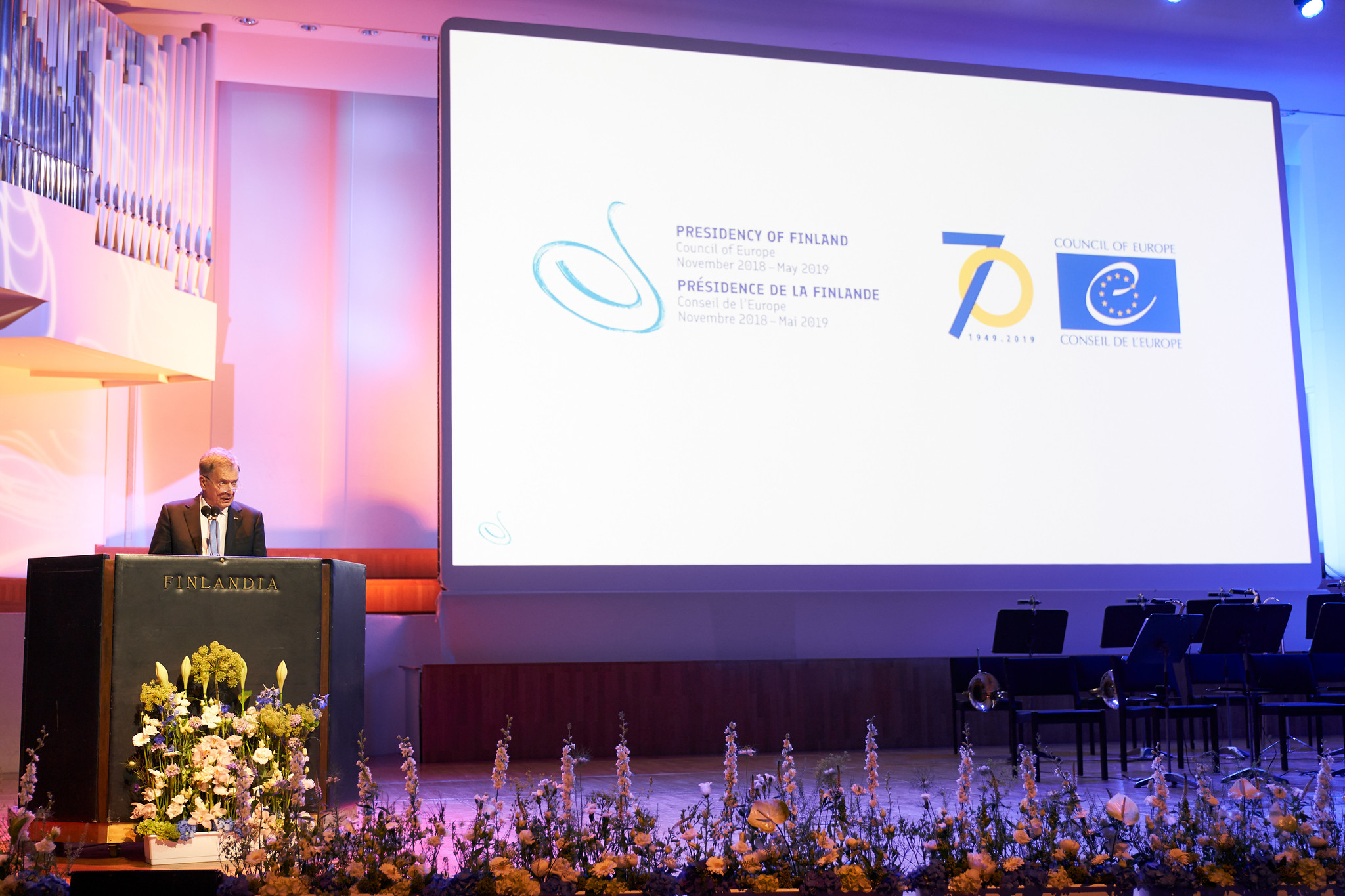 The opening speech at the 70th anniversary celebrations was delivered by the President of the Republic Sauli Niinistö. Photo: Kimmo Räisänen.

Speakers at the event included President of the Republic of Finland Sauli Niinistö, Secretary General of the Council of Europe Thorbjørn Jagland, President of the Parliamentary Assembly Liliane Maury Pasquier and Minister for Foreign Affairs of Finland Timo Soini. Besides the speeches, the guests enjoyed amazing musical performances and followed a thought-provoking youth panel. Among the topics discussed by the brave panellists Kaarina Huovinen, Santeri Räisänen and Vivian Isberg were the human rights challenges faced by young people with disabilities, how artificial intelligence affects people’s daily lives and rights, and how well the rights of the Roma people are fulfilled in today’s Europe.

A challenging but rewarding Presidency

Among the main Issues that tainted the Presidency was Russia’s right to participate and refusal to pay the membership fees. As a consequence of the unlawful annexation of Crimea, Russia was denied the right to vote at the Parliamentary Assembly of the Council of Europe, and Russia protested by refusing to pay the membership fees. The crisis that started in 2014 gradually widened the gap between the two main institutions of the Council, the Committee of Ministers composed of the Foreign Ministers of the Member States and Parliamentary Assembly composed of MPs nominated by the Member States’ parliaments. To resolve the crisis, the Finnish Presidency wanted to hear all parties, facilitate discussion, and build trust between the parties so that the different Council institutions could find a common, constructive solution to the challenges faced by the organisation. Finland’s efforts were highly successful, and the news from the Finlandia Hall last Friday was good: the meeting adopted a decision concerning the rights and obligations of all Member States.

“Finland’s Presidency was a big success. Besides promoting the selected themes and organising a successful Committee of Ministers meeting, we managed to build trust between the institutions of the Council of Europe. The work we have done makes things easier for France as the next Presidency”, says Minister for Foreign Affairs Timo Soini. 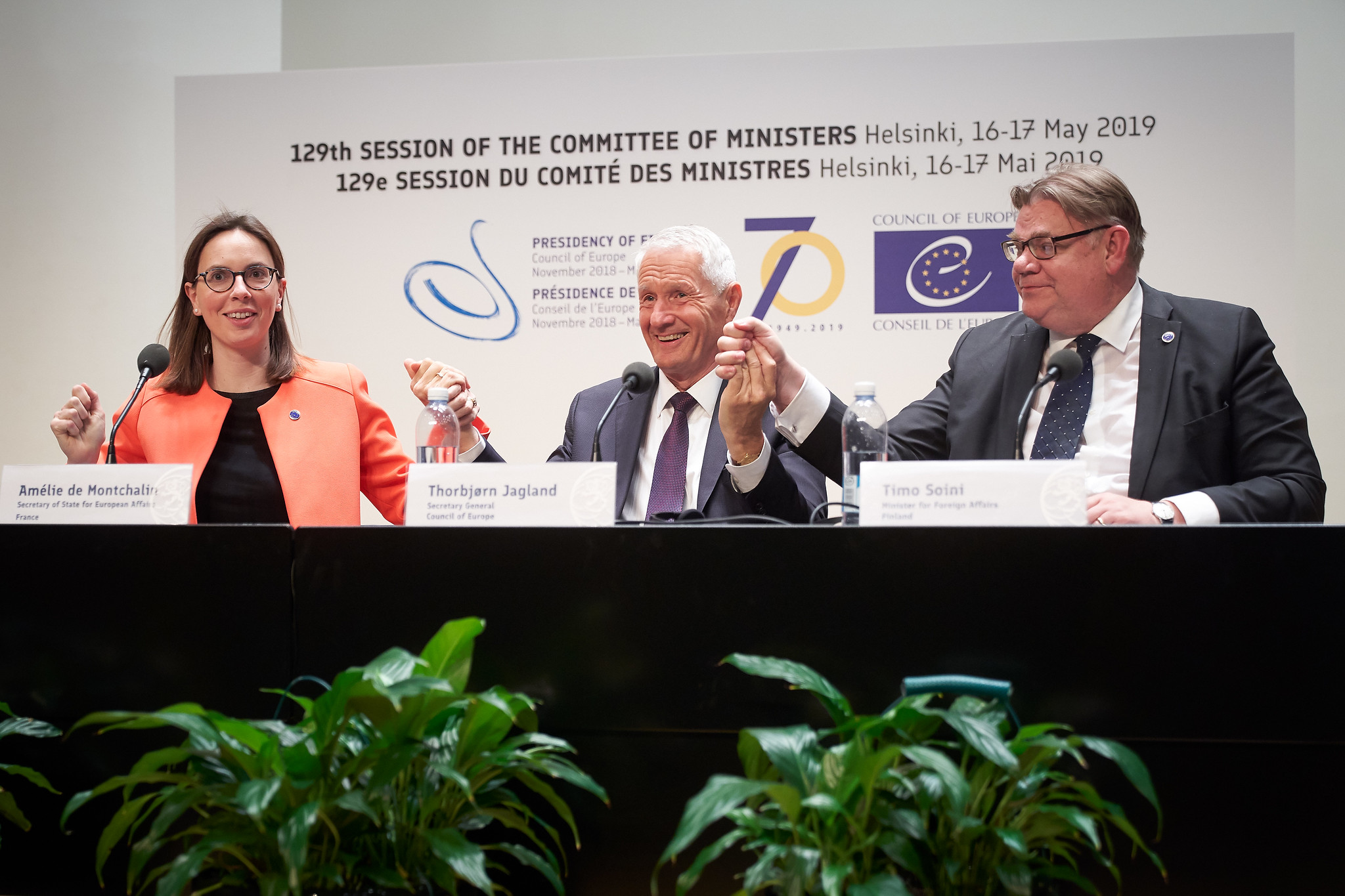 France as the next Presidency, Secretary General Jagland and Minister for Foreign Affairs Soini cheer at the successful Committee of Ministers meeting. Photo: Kimmo Räisänen. Future of the Council of Europe on the agenda

In addition to the decision mentioned above, the Committee of Ministers of the Council of Europe adopted other significant decisions in Helsinki, concerning e.g. the protection and promotion of civil society space and new challenges raised by the Secretary General, including artificial intelligence and human rights. The Committee of Ministers also adopted a political declaration where all 47 Member States renewed their commitment to the basic work of the 70-year-old organisation, i.e. strengthening human rights, democracy and the rule of law.

Focus on the weakest during Finland’s Presidency

Despite the political challenges, Finland also managed to keep several thematic priorities high on the Presidency agenda, selected in cooperation between different ministries and the civil society. The three priorities were: strengthening the system of human rights and the rule of law in Europe, supporting equality and women's rights, and openness, inclusion, young people and the prevention of radicalisation. These all are themes that Finland has actively and consistently promoted in all its work within the Council of Europe. Numerous thematic events were organised around these three mutually supporting priorities, both in Finland and Strasbourg. The main event of Finland’s Presidency took place in February, when almost 400 participants met at the Finlandia Hall to discuss artificial intelligence and human rights. Besides artificial intelligence, certain other themes raised during Finland’s Presidency, such as the rights of Roma women and status of sign language, were also strongly present at the 70th anniversary celebrations.

Founded in 1949, the Council of Europe is Europe’s oldest and largest political cooperation and human rights organisation. Finland has been in a key position in many topical issues on the Council of Europe’s agenda, including the initiative to establish the Commissioner for Human Rights in 1999.

The Council of Europe team of the Ministry for Foreign Affairs wishes to thank all those involved in organising the Committee of Ministers meeting and 70th anniversary celebrations!