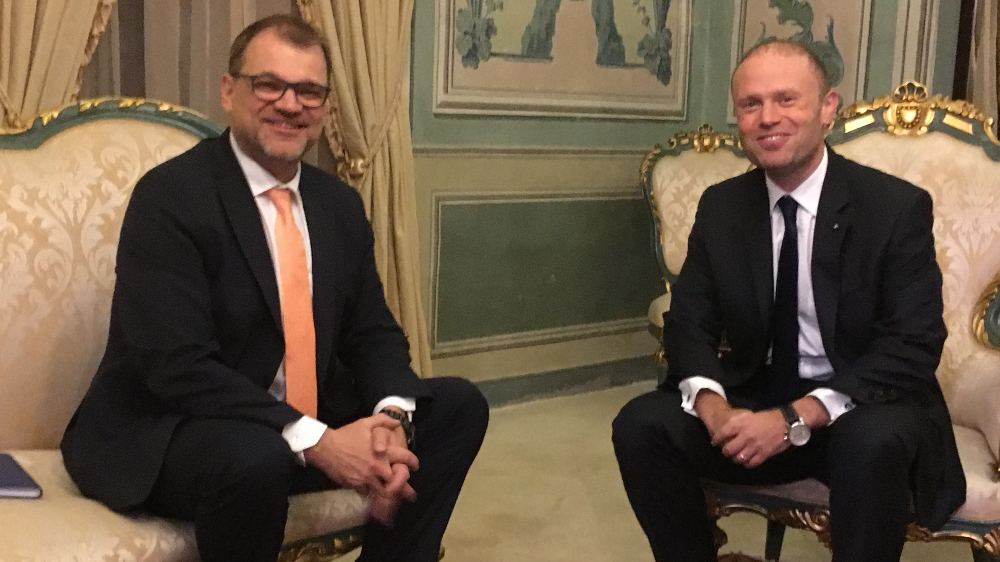 On Friday 14 December, Prime Minister Juha Sipilä continued his series of bilateral meetings relating to the preparations for Finland’s Presidency of the Council of the EU by talks with the Prime Minister of Malta Joseph Muscat in Valletta. This week Prime Minister Sipilä will also visit Cyprus, the Czech Republic and Slovakia to meet their leaders. After that, the Prime Minister will have met more than half of his European colleagues.

“Key issues for the Finnish Presidency include actions to combat climate change and finding solutions concerning the next Multiannual Financial Framework of the EU. Finland and Malta have many shared interests, such as securing a sufficient level of support in cohesion policy”, Prime Minister Sipilä says.

Malta held the Presidency of the Council of the EU during the first half of 2017. At that time migration was already high on the agenda of Malta and the whole EU.

“Malta has a great deal of knowledge and expertise on migration, situation in the Mediterranean region and Africa that is most valuable for us”, Sipilä says.

The Prime Ministers also discussed bilateral issues between Finland and Malta, including the development of economic relations.

Prime Minister Sipilä was pleased with the talks. “The prospects to increase trade between our two countries are very good. Growing numbers of Finns travel to Malta as tourists, and we could have more cooperation in questions such as getting Chinese tourists to travel to Malta via Helsinki.”