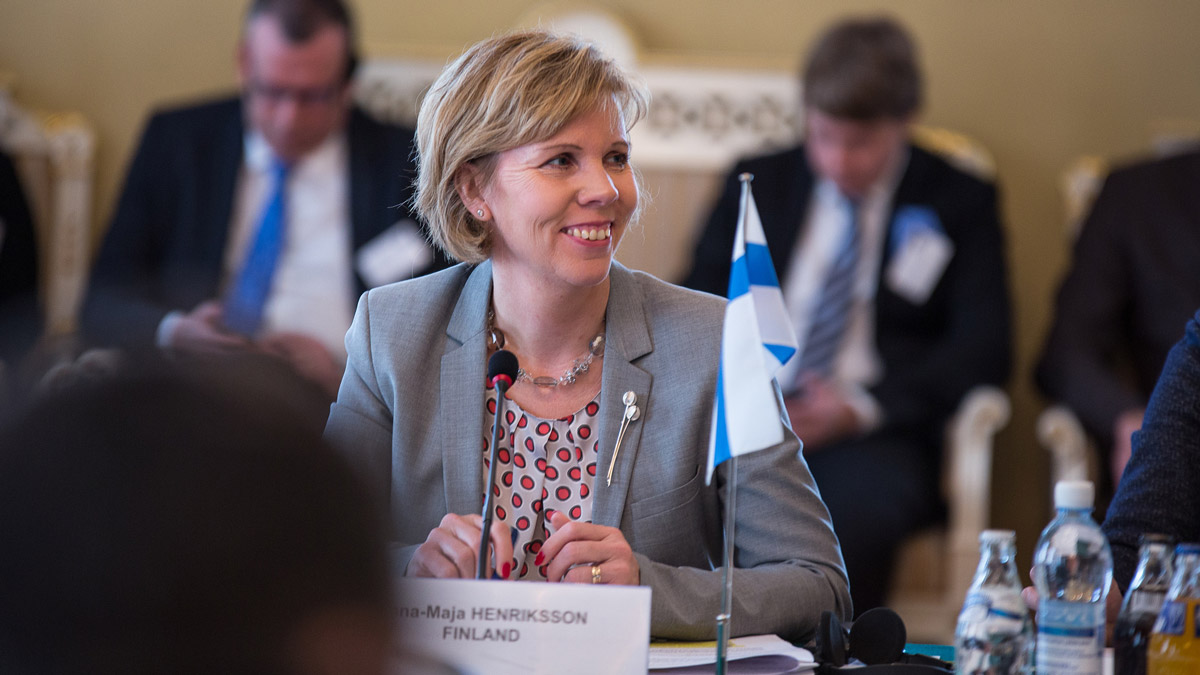 "We did it – we broke the glass ceiling!" ... "I thought this day would never come, this is a fantastic thing."

Anna-Maja Henriksson at a meeting between Ministers of Justice from EU Member States on 28 April 2014. Laura Kotila/Prime Minister's Office

Anna-Maja Kristina Henriksson was the first female chair of the Swedish People's Party of Finland.

Henriksson, from Pietarsaari, studied law in Helsinki and graduated as a Master of Laws with court training in 1989. She returned to work as a bank lawyer in her home town and was elected in the city council in 1996. She was also the chair of the city board from 2001 to 2008.

Henriksson became interested in national politics after having worked as a special advisers to Minister of Finance Ulla-Maj Wideroos in the period 2003–2004. Henriksson was elected member of Parliament at her first try in 2007 and has been a member of the Legal Affairs Committee as well as the Employment and Equality Committee, among others. She was the leader of the Swedish parliamentary group from 2015 to 2016.

Social affairs and education issues as well as the status of families with children are among the central themes of Henriksson's politics. She served as the Minister of Justice in both Katainen's and Stubb's Governments. During her terms as a minister, Henriksson, for instance, criticised the Draft Government Proposal on the health, social services and regional government reform and pushed through stricter punishments for sexual crimes. Other key reforms were focused on the Paternity Act and Non-discrimination Act as well as the court of appeal and administrative court. Henriksson was also in charge of issues concerning Åland. After her term as a minister, Henriksson returned to her position as a member of Parliament.

She has served in positions of trust, for example in the Board of the Social Insurance Institution of Finland, in the county council of the Regional Council Of Ostrobothnia, and the supervisory boards of Alko and Finnvera.

"We did it – we broke the glass ceiling!" ... "I thought this day would never come, this is a fantastic thing." (Henriksson after being elected as the first female chair of her party: De Fresnes, Tulikukka and Harala, Samuli: Anna-Maja Henrikssonista RKP:n uusi puheenjohtaja – ”Rikoimme lasikaton” [Anna-Maja Henriksson as the new chair of the Swedish People’s Party - "We broke the glass ceiling"]. Yle News, 12 June 2016)