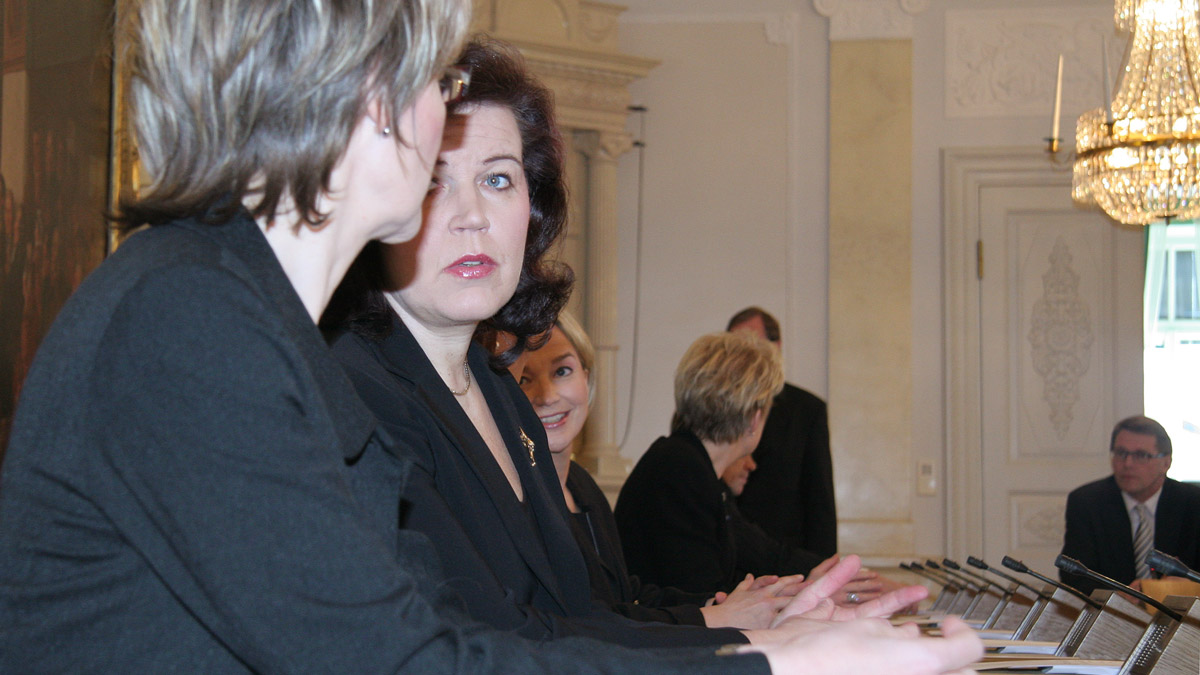 ”Due to my background, politics was never a major choice for me. It is a genetic defect running in my family.”

Anne Holmlund takes her ministerial oath on 19 April 2007. A Cabinet Session Paula Risikko at the front and Tuija Brax at the back. Prime Minister's Office

Anne Elisabeth Holmlund was the Minister of the Interior during the Jokela and Kauhajoki school shootings. The emergency response centre system and gun legislation were renewed under her leadership.

Anne Holmlund, who graduated with a vocational qualification in business and administration in 1987, worked as a sales secretary in a family company as well as a financial secretary at the auto paint shop of her husband, Jarmo Peltomaa. Since 1983, she has also been engaged in real estate and rental activities in Pori.

Holmlund entered politics through the city council of Ulvila in 1989. She has worked at many different levels of local politics, including as the deputy chair of the city board and as the chair of the council. Holmlund has also been a member of the Presidium of the Regional Council of Satakunta and has served in a number of positions of trust in the organisations and associations in the Satakunta Region.

Holmlund, a member of the district government of the National Coalition Party from 1996 to 2000, first received a seat in the Parliament in 2002, as she replaced Olli-Pekka Heinonen, who had taken up a post at the Finnish Broadcasting Company Yle. Holmlund was the chair of the Employment and Equality Committee, and the Legal Affairs Committee.

Holmlund served as the Minister of the Interior at both Vanhanen's II and Kiviniemi's Governments. During her term, focus areas included gun legislation and the locations of emergency response centres. The school shootings of Jokela, Tuusula (2007) and Kauhajoki (2008) took place during Holmlund's terms as a minister.

Holmlund opted out of the Parliament in 2015. Among other positions, she has served in the Advisory Board for Voluntary Defence and the Council of the Finnish National Rescue Association. She has been the chair of Women’s National Emergency Preparedness Association since 2013.

Holmlund's father was Ilmari Holmlund, a local politician from Pori and the chair of the party organisation of the Private Entrepreneurs of Finland.

Minister of the Interior Anne Holmlund at a press briefing on the Kauhajoki school shooting on 24 September 2008. Holmlund speaks for the first time at time stamp 02:13.