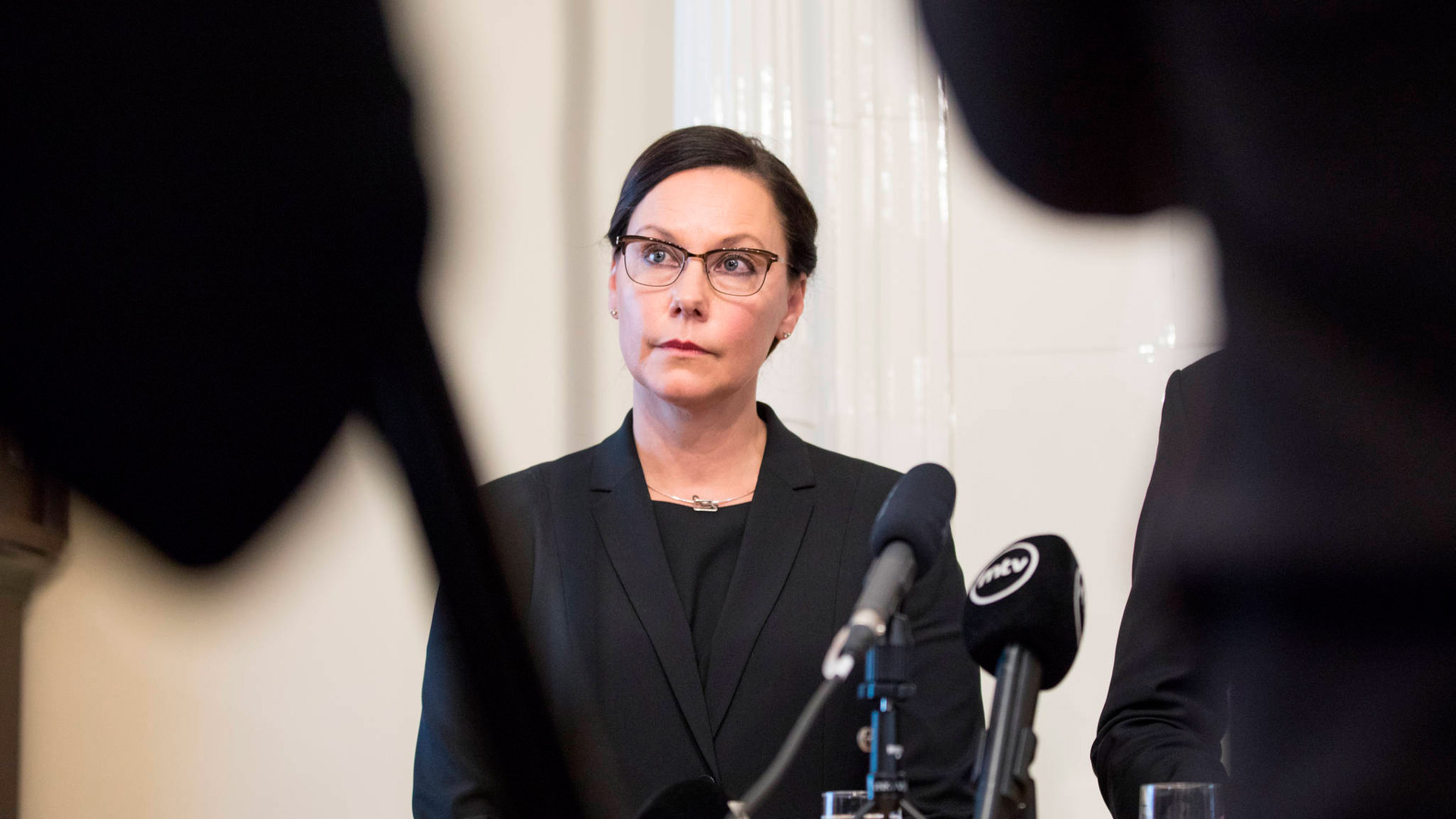 "My motto: Get busy! What I'm like: Energetic, positive, and extremely direct and frank."

Anne-Mari Virolainen, Minister for Foreign Trade and Development, in a briefing after her appointment on 12 February 2018. Lauri Heikkinen/Prime Minister’s Office

Anne-Mari Virolainen got a relatively late start in politics, but has progressed rapidly and became a minister in early 2018. Virolainen has solid experience in business and entrepreneurship. She holds a Master of Arts in Economics.

Virolainen was born in Turku. Her mother was a caretaker at the parish building and her father a police officer. She spent her summers as a child at her grandparents' home in Loimaa. In 1974, the she and her parents moved to Lieto. Virolainen's early hobbies included playing the piano and scouting, which is where she gained in interest in working in associations. When she was young, Virolainen dreamed of becoming a teacher.

After she graduated from upper secondary school, Virolainen spent a year as an au pair in Helsingborg in Sweden's Skåne.  In 1985, she began her studies at the Turku School of Economics majoring in international business. While she was a student, she met her husband Petri Virolainen. Anne-Mari and Petri Virolainen spent 1996 and 1997 in the United States while their children were small.

After graduating with a Master's degree in Economics, Virolainen worked for nearly twenty years as an expert and executive in marketing and communications at companies such as Telia, Sonera, advertising firm Satumaa, communications firms Eurofacts and ICT Turku.

In 2005, Virolainen decided to go into politics and was immediately elected chair of the Lieto municipal council. Virolainen became a member of Parliament on her first try in 2007. She renewed her place in Parliament in 2011 and 2015. Virolainen has been chair of the Grand Committee, which handles matter related to the EU and a member of many other committees. She has gained international experience by working in bodies such as the Nordic Council of Ministers, the Council of Europe as well as in the Inter-Parliamentary Union (IPU)

Virolainen was the deputy chair of the National Coalition Party from 2010 to 2016. She also stoodas a candidate in the 2014 European Parliament's elections. Virolainen was appointedMinister of Foreign Trade and Development in Juha Sipilä's Government in February 2018.

Virolainen has been a very active participant in the activities of organisations and associations. She gained experience in leadership at a young age in the Turku Junior Chamber of Commerce. While participating in Rotary activities, she was especially interested in international youth exchanges inviting numerous foreign exchange students to live in her home. Virolainen has held various management roles for example at Pohjola-Norden, the Ecolabel Committee, Finnfund, the Island Committee and Kansallinen Lastenliitto ry - The National Organization for Children.

Anna-Mari Virolainen's family includes her husband Petri, who is director of Turku University Hospital, as well as three children, the oldest of whom died due to a terminal illness before turning 15.

"I went into regional politics after our oldest child fell ill. I had to handle very difficult matters with my home municipality, which zapped me of much of my strength. That is when I decided to take the initiative to change the world or at least try to do so.  After a fantastic result in the elections, I was delighted to be appointed the chair of the Lieto municipal council. (Anne-Mari Virolainen's website)

"My motto: Get busy! What I'm like: Energetic, positive, and extremely direct and frank."  (Anne-Mari Virolainen's website)

"I find it an alarming phenomenon that there are so few experienced women in Parliament." (Olli Pohjanpalo: ’Maanantaina virkaan, tiistaina Kuwaitiin’. Helsingin Sanomat, 11 February 2018)