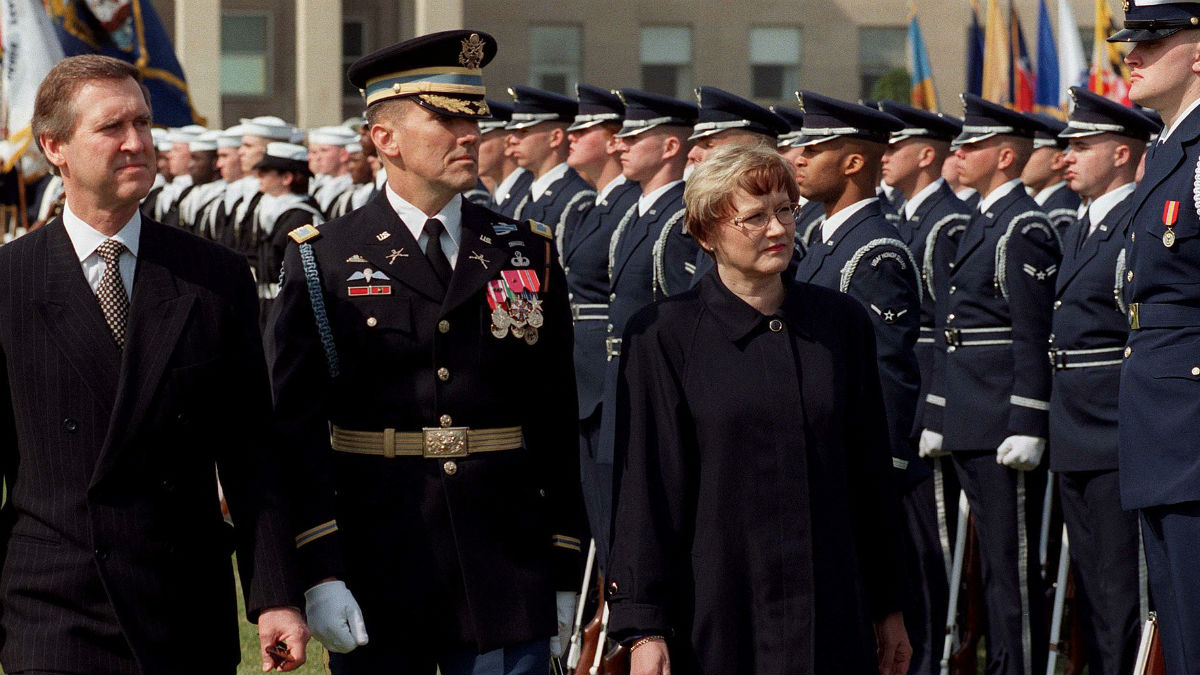 “For me, it has been the time [in Parliament] that I have most liked, especially the responsibilities of the Minister of Defence. I have often said that, for a politician, serving as a minister and becoming a member of the Government is like winning a medal in the Olympic Games.”

Anneli Taina, Minister of Defence, inspects the honorary company together with William Cohen, US Defence Secretary (on the left), and Colonel Gregory Gardner, at the Pentagon on 26 March 1998, during her visit to the United States. R. D. Ward/Wikimedia Commons

Anneli Kristiina Taina was the second female Minister of Defence in Finland in the 1990s. Taina returned to local politics when she was elected to the city council of Tampere in 2017.

Anneli Taina was born in Imatra, but moved to Tampere in her childhood. She graduated with a degree of Master of Social Sciences in 1975. She worked as a social worker in charge of income support and social welfare for the disabled at the City of Tampere for ten years. Taina entered politics the 1980s when she was elected to the city council of Tampere and she was also a member or the city executive from 1985 to 1987.

Taina’s career as a member of Parliament began in 1987. As a member of Parliament, she served in the Grand Committee, the Committee on Labour Affairs and the Social Affairs and Health Committee (also as deputy chair). She was appointed as Minister of Housing to Esko Aho’s Government for just over three months. During her short term as a minister, Taina took a stand on humane urban planning and increasing the role of women in land use planning.

Taina became the second female Minister of Defence in Finland in Paavo Lipponen’s Government. During her term, decisions were made on the acquisition of helicopters and sending crisis management troops to Bosnia, among other things. There was also a lot of discussion on the development of the Finnish Defence Forces and Finland’s possible membership in a military alliance.

Taina was not re-elected to Parliament after her term as a minister. She served as the director of Kela’s insurance district of Tampere from 2002 to 2003, and was chosen as the provincial governor of the Province of Southern Finland in 2004. After the posts of provincial governors were abolished, Taina became Director General of the Regional State Administrative Agency of Southern Finland. She retired in 2014.

Taina served as the chair of the Board of the Social Insurance Institution of Finland from 2012 to 2016. In autumn 2016, she was appointed to carry out a report on the future of the Finnish Customs.

Taina has held a large number of positions of trust especially in the health sector and in the field of national defence. She has served in the Advisory Council for Front-line Veterans’ Affairs and was the deputy chair of the Defence Council. Taina was the chair of Naisten Valmiusliitto from 2006 to 2012. She was a member of the Council for Gender Equality from 1987 to 1995 and has also lead Kokoomuksen Naisten Liitto, the Women’s League of the National Coalition Party. She was elected to the board of the National Coalition Party in 2000.

Anneli Taina’s father was Major (retd) Toivo Jussila, on whose initiative Marshall Mannerheim decided to award the Cross of Liberty to all Finnish mothers in 1942.

“For me, it has been the time [in Parliament] that I have most liked, especially the responsibilities of the Minister of Defence. I have often said that, for a politician, serving as a minister and becoming a member of the Government is like winning a medal in the Olympic Games. But I have liked all the positions I have held.” (Lahnajärvi, Anne: ”Eläköitynyt Anneli Taina: Mieluummin valistusta kuin valvontaa.” Tamperelainen.fi, 26 February 2015)