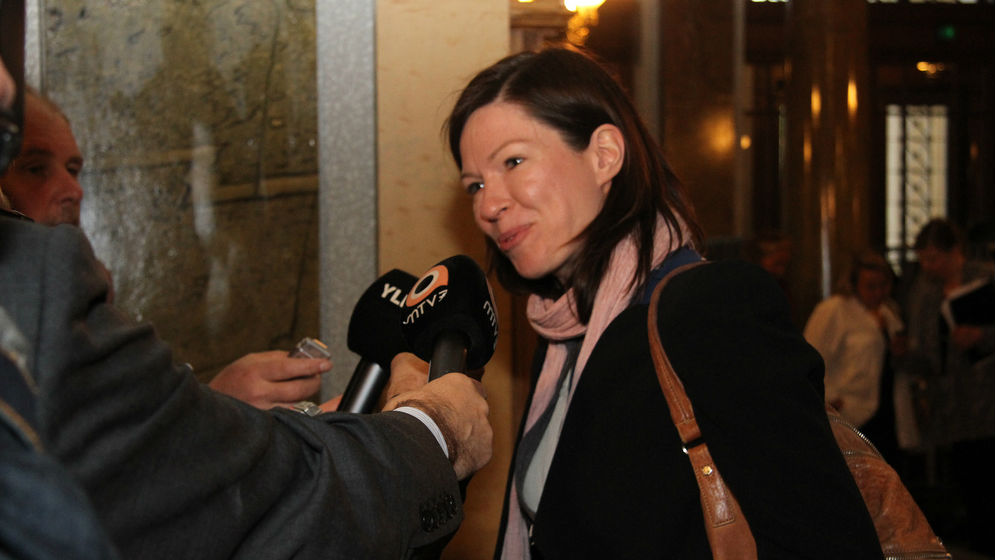 “I have been interested in society for as long as I can remember. I grew up in the bipolar world of the Cold War and in a family who discussed the world and its state – at least when I wanted my parents to do so.”

Anni Sinnemäki at a press briefing on 23 May 2011. Prime Minister's Office

Helsinki born and bred, Anni Milja Maaria Sinnemäki became famous as a lyricist and poet before launching her political career. During her term as Party Chair, the Greens produced the first specific political programme in their history, in lieu of the previous, more general statements of principles.

Sinnemäki wrote lyrics for the albums of a band called Ultra Bra from 1996 to 2001 and for two albums by Kerkko Koskinen from 2002 to 2005. She also worked as Project Secretary to the Minister of the Environment and as a columnist for the NYT supplement of the Helsingin Sanomat newspaper in 1998. She studied philosophy and Russian literature at the University of Helsinki, graduating as Bachelor of Arts in 2001.

Coming from a left-wing background, Sinnemäki started out in politics with a successful bid for Parliament in 1999. Among other duties, she served on the Parliamentary Defence, Finance and Environment Committees and the Grand Committee, chairing the Auditing Sub-Committee from 2003 to 2007. She was also a member of the Finnish Delegation to the OSCE Parliamentary Assembly from 1999 to 2003.

Sinnemäki became Chair of the Green Party Parliamentary Group in 2007. Having served as the Green League’s Vice Chair from 2003 to 2007, she was elected as Party Chair in 2009. At the same time, she replaced Tarja Cronberg as Minister of Labour in Prime Minister Matti Vanhanen’s Second Government and continued with the same portfolio in the subsequent Prime Minister Mari Kiviniemi’s Government. Key decisions taken during her ministerial terms included the introduction of the Sanssi card to promote youth employment and the opportunity to study on unemployment allowance. Sinnemäki also took stands on various issues, speaking out in favour of the abolition of fur farming and against the tax exemption of dividend income.

After her ministerial terms, Sinnemäki resumed her MP’s seat and lost her party’s leadership to Ville Niinistö in 2011. She also served on the Helsinki City Council from 2005, chairing its Cultural and Library Committee in 2009.

In January 2015, Sinnemäki became Helsinki’s Deputy Mayor responsible for city planning and real estate. Key projects in her sector have included a new city plan, the Raide-Jokeri light-rail line, as well as plans to build the Central Library and a major mosque. In the 2017 local elections, she was the Greens’ candidate for Mayor.

Sinnemäki has published two collections of poems, Sokeana Hetkenä (‘In a blind moment’, Nemo 2003) and Aleksis Kiven katu (‘Aleksis Kivi Street’, Otava 2009). In 2002, she was awarded the Juha Vainio Prize for her lyrics. As her most important literary role model, Sinnemäki names Russian poet Anna Akhmatova.

“I have been interested in society for as long as I can remember. I grew up in the bipolar world of the Cold War and in a family who discussed the world and its state – at least when I wanted my parents to do so.” (Anni Sinnemäki on her website at annisinnemaki.net)