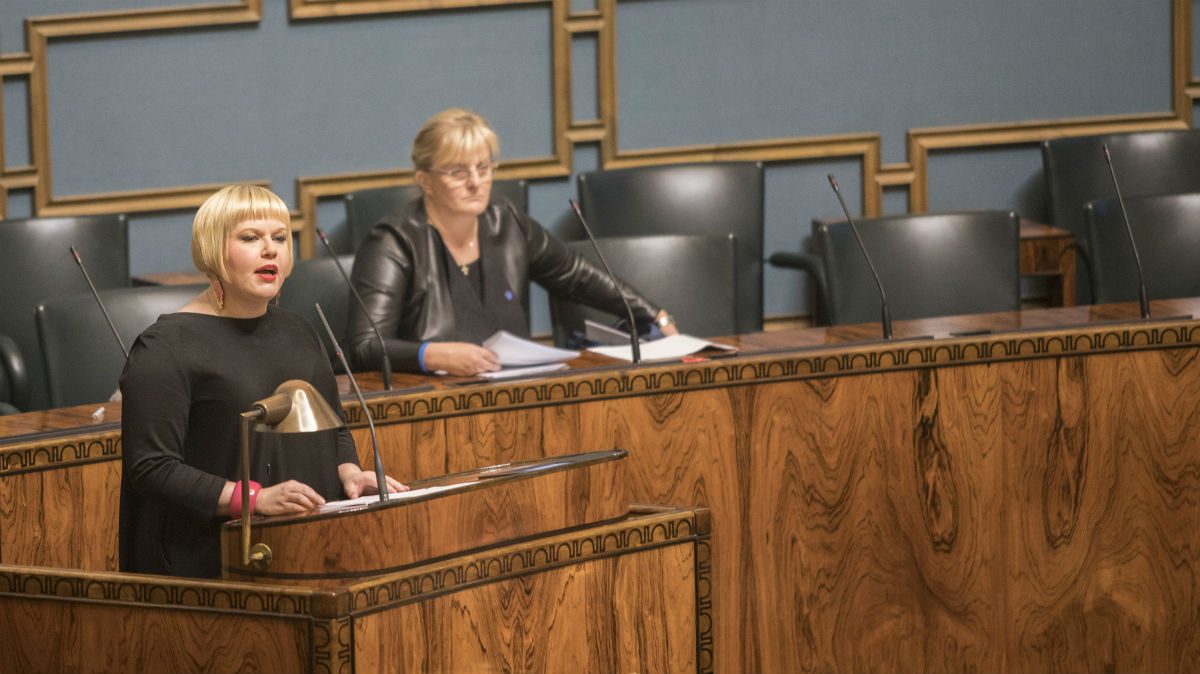 “Politics is not just about new acts, decrees and decisions. It is also about values, choices and painful balancing acts.”

Minister of Family Affairs and Social Services Annika Saarikko presented the Government’s proposal for an alcohol act to Parliament on 19 September 2017. Minister Pirkko Mattila in the background. Hanne Salonen/Finnish Parliament

Annika Virpi Irene Saarikko took over as Minister of Family Affairs and Social Services in Prime Minister Juha Sipilä’s Government midway through the electoral period in 2017. At the same time, the 33-year-old Saarikko was entrusted with the management of the health and social services reform, which is one of the most sweeping societal efforts in Finland.

The Government had already agreed on splitting the ministerial term between Saarikko and her predecessor Juha Rehula at the beginning of its term. Saarikko’s portfolio also covers issues such as equality affairs, while this is the first electoral period that it incorporates the responsibilities of the Minister of Family Affairs.

Born in Oripää in the Varsinais-Suomi region, Saarikko represents the Centre Party’s ‘young guard’, who have enjoyed soaring career trajectories. She spent her childhood and adolescence in the country’s southwest and western regions of Varsinais-Suomi and Satakunta. Her family ties also extend to South Ostrobothnia. Saarikko says that she used to dream of becoming a farmer’s wife or a teacher when she was a child.

Saarikko studied at the University of Turku, initially obtaining a Bachelor of Arts degree in Education from its Department of Teacher Education, but she subsequently graduated as Master of Arts from her second main subject, Media Studies. Her MA thesis dealt with the publicity of Prime Minister Matti Vanhanen’s divorce in the Ilta-Sanomat evening paper. Saarikko has also been interested in communications and journalism and their relationship with politics in other respects. She has worked as a journalist in a local newspaper, as a publicist for the Evangelical Lutheran Church and in various parish positions.

Saarikko got involved with Finnish Centre Students in Turku in 2004, serving on the Board of Finnish Centre Youth and participating in student union politics at her university towards the end of the decade. She got a real taster of her future ministerial role when assisting several ministers: she worked as Press Attaché to Paavo Väyrynen and Senior Adviser to Liisa Hyssälä and Juha Rehula from 2009 to 2010, and as Special Adviser to Prime Minister Mari Kiviniemi responsible for communications from 2010 to 2011.

In the summer of 2010, Saarikko became her party’s Vice Chair at the age of 26 and went on to hold the position for six years. She was elected to Parliament from the Varsinais-Suomi electoral district in 2011 and to the Turku City Council in 2012. She renewed her MP’s seat in 2015. In Parliament, Saarikko has served on the Social Affairs and Health Committee and the Employment and Equality Committee, in particular.

Saarikko has held numerous positions of trust and leadership in various voluntary and civil society organisations, such as the Alzheimer Society of Finland, the UN Association of Finland, the HIV Foundation, Icehearts Turku, the European Movement in Finland, the Finnish 4H Federation, and the Tiukula Foundation.

Saarikko is married and has two children.

“The best day of a ministerial term is the one on which you become a minister, not when you are a minister.” (Teija Sutinen: ”En halua olla pelkästään sote-ministeri”. [“I don’t want to be just minister for health and social services reform”.] Helsingin Sanomat newspaper, 8 July 2017, p. 10.)

“Politics is not just about new acts, decrees and decisions. It is also about values, choices and painful balancing acts.” (Annika Saarikko on her website at annikasaarikko.fi)