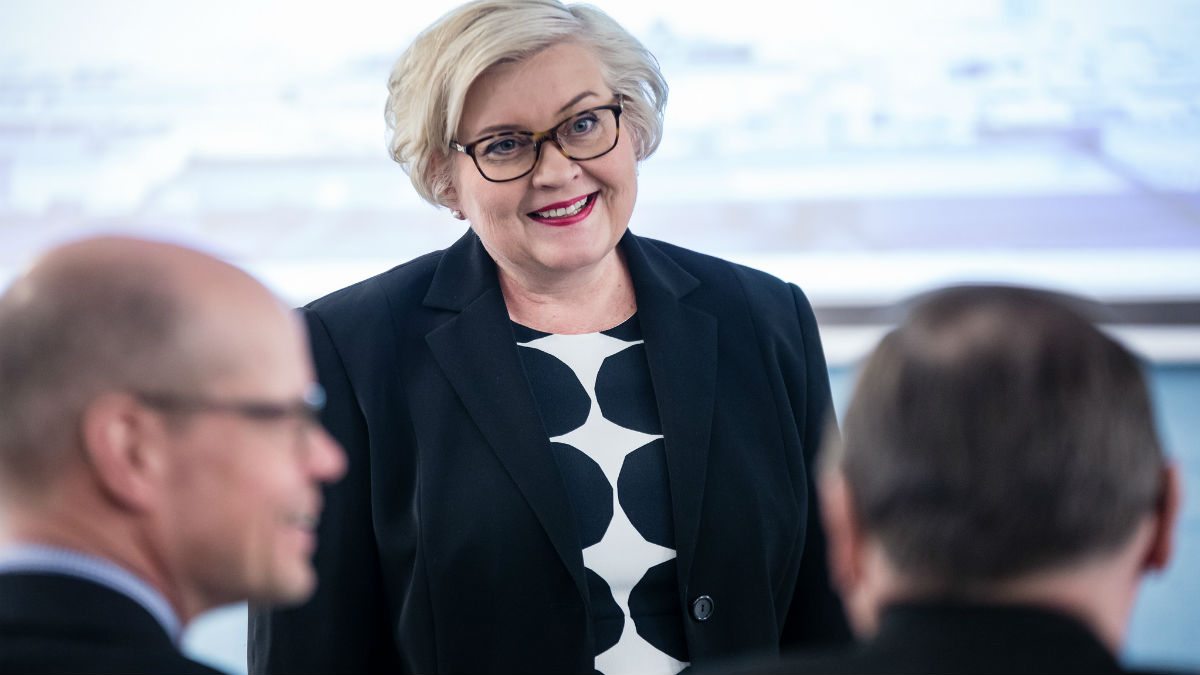 “The morning is wiser than the evening. You’ve had a long day, you’re tired and can’t seem to find any solutions whatsoever. You feel like the world is crashing down on you… That’s when it’s wise to have a good night’s sleep, and you’ll usually find the solutions in the morning.”

Anu Helena Vehviläinen has held many positions of trust in her Centre Party. In Prime Minister Juha Sipilä’s Government, her key duties have included various reforms, such as the regional government reform, public sector digitalisation and fostering a culture of experimentation.

Born in Leppävirta, Vehviläinen went to Savonlinna Upper Secondary School of Arts and Music. After passing her upper secondary school matriculation examination, she obtained a Cultural Secretary’s Diploma from Alkio College in 1984. In 1994, she graduated as Master of Arts from the University of Joensuu, where she studied Finnish Literature, writing her Master’s thesis on politicians as art critics. During her student years, Vehviläinen was known as a street theatre enthusiast and she also led her party’s student and youth organisations.

Vehviläinen was elected to Parliament for the first time in 1995. After losing her seat in 2003, she worked as the Executive Director of the Northern Karelia District of the Mannerheim League for Child Welfare and as the Managing Director of Joensuun Röntgen Oy.

Vehviläinen’s second stint as a Member of Parliament started in 2007. Among other duties, she has served on the Parliamentary Environment, Education and Culture, Finance, and Social Affairs and Health Committees. She has also been Vice Chair of her parliamentary group on three occasions.

In 2007, Vehviläinen was appointed as Minister of Transport to Prime Minister Matti Vanhanen’s Second Government and she also held the same portfolio in the subsequent Prime Minister Mari Kiviniemi’s Government. Key items on the agenda included the first Government Report on Transport Policy, rail transport operations, congestion of lorries queuing at the eastern border, and the European Union’s Sulphur Directive. In Prime Minister Sipilä’s Government, Vehviläinen became Minister of Local Government and Public Reforms. Key issues during her ministerial term have included the regional government reform, paring down local government functions, as well as key projects focusing on themes such as a culture of experimentation and digitalisation.

Vehviläinen has held many positions within her Centre Party, such as Vice Chair, member of the Party Executive and a working committee, and leader of various working groups. In addition, Vehviläinen has served on the Supervisory Boards of VR Group Ltd, Finland Post Corporation and Finnvera Plc.

Vehviläinen was active on the Joensuu City Council from 1993 to 2012, serving as Second Deputy Chair of the City Executive from 2005 to 2007. She has also sat on the boards of the Association of Finnish Local and Regional Authorities, the Local Government Pensions Institution, and the Regional Council of North Karelia.

“The morning is wiser than the evening. You’ve had a long day, you’re tired and can’t seem to find any solutions whatsoever. You feel like the world is crashing down on you… That’s when it’s wise to have a good night’s sleep, and you’ll usually find the solutions in the morning.” (Anu Vehviläinen in a Prime Minister’s Office interview on 21 April 2017.)

Anu Vehviläinen, Member of Parliament, who had introduced a motion in Parliament on the basic income guarantee, talking on YLE’s programme “A-studio” at time stamp 02:40 and 06:02 on 21 July 1998.