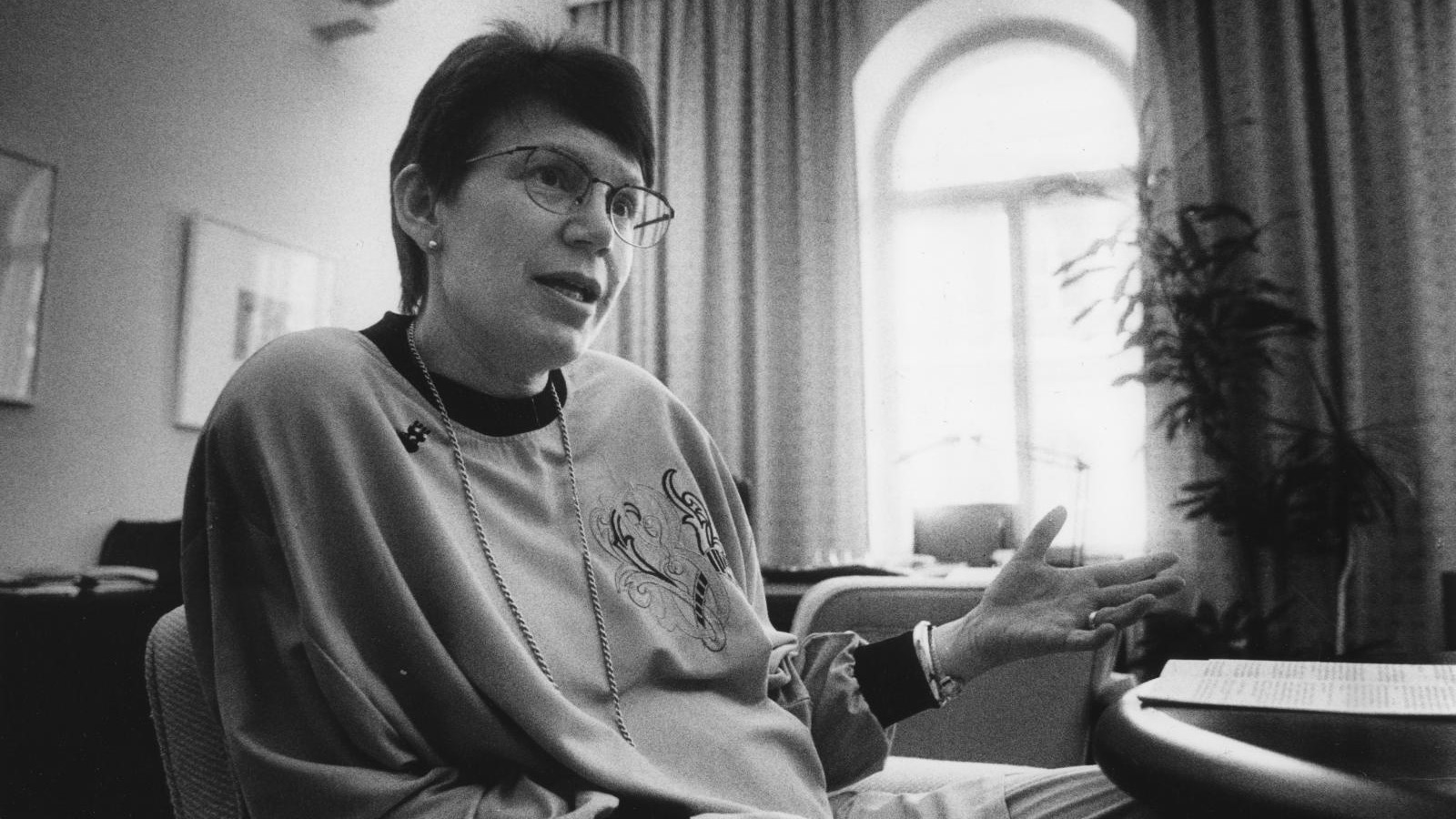 "I've been working with people all my life. Everything that matters is a result of working together with others. I am excitable, but also tenacious, sometimes maybe even trying for too long. I am not discouraged by failure, and also tolerate failures by others. But freeloaders and moochers are not worthy of my admiration."

Eeva Kuuskoski was Minister of Social Affairs and Health in the 1980s and 1990s. Picture from Aho’s Government term in 1991. Kari Hulkko/The Labour Archives

Eeva Maija Kaarina Kuuskoski was one of Finland's most popular politicians at the turn of the 1980s and 1990s.

Her uncle, Reino Kuuskoski, was the Prime Minister of the caretaker government in the 1950s and 1960s and served as the President of the Supreme Administrative Court, among other positions.

Kuuskoski became personally active in politics when she was studying social policy, economics and philosophy in addition to her degree studies in medicine at the University of Turku. She graduated with a licentiate in medicine in 1972. In the following year, she was elected into the Turku City Council, where she continued until 1980. Kuuskoski, who had been working as a health centre and assistant physician, graduated as a paediatrician in 1982.

Early in her career as a Member of Parliament, which began in 1979, Kuuskoski made the move to Finland's Centre Party, which she found more progressive than the National Coalition Party. She was appointed Minister of Social Affairs and Health first in Prime Minister Sorsa's, and later in Prime Minister Aho's Government. During her first term as minister, Kuuskoski promoted the introduction of home-care allowance and testing the personal doctor system, among other things. Her second term ended with her resignation, as she felt left out in the decision-making on spending cuts. Kuukoski, who was popular among voters, was the deputy chair of the parliamentary group of the Centre Party form 1989 to 1991. She was defeated by Esko Aho in the campaign for party leader for the Centre Party in 1990.

As a Member of Parliament, Kuuskoski's focus was on social and equality issues as well as foreign and security policy. In addition to her numerous other positions of trust, she was the president of the Council for Gender Equality from 1981 to 1987. She ran for President as the candidate of the Muutos 94 popular movement in 1994. Due to her poor performance in the presidential elections and failure to secure a seat in the European Parliament, Kuuskoski left the Parliament of Finland in 1995. She served as the Programme Manager of the Mannerheim League for Child Welfare and was appointed its Secretary General in 1998.

In 2007 Kuuskoski became the Secretary General of the co-operation body for social welfare and health organisations (YTY/SOSTE) and was later appointed its Director. Kuuskoski retired from the position in 2013.

Kuuskoski, who has long experience in non-governmental organisations, has served in a large number of different positions of trust. She continued her work in the Centre Party and was the Political State Secretary of the Ministry of Social Affairs and Health from 2010 to 2011. Kuuskoski was the first female chair of the Finnish Pensioners' Federation.

"I've been working with people all my life. Everything that matters is a result of working together with others. I am excitable, but also tenacious, sometimes maybe even trying for too long. I am not discouraged by failure, and also tolerate failures by others. But freeloaders and moochers are not worthy of my admiration." (Eeva Kuuskoski's website)

YLE’s current affairs programme Raportti on the subject of economic policy on 12 December 1995. Eeva Kuuskoski speaks at 11.04 minutes and 25.55 minutes.