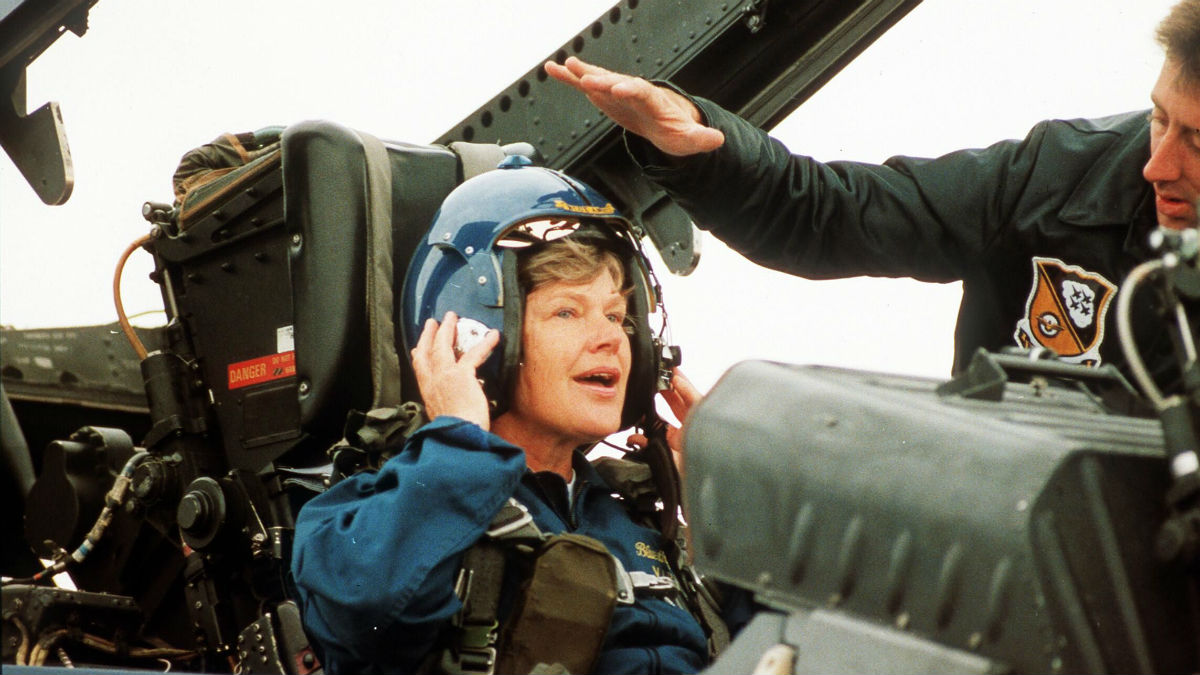 “I was saved by the old Infantry General Adolf Ehrnrooth, who said to the generals, ‘let’s give the lass a chance, then we can judge her’.”

Märta Elisabeth Rehn was the first woman in the world to serve as Minister of Defence in a full-time capacity. After withdrawing from day-to-day politics, Rehn forged a substantial international career in the field of human rights and civil society organisations.

Rehn graduated as Bachelor of Science in Economics and Business Administration from Hanken School of Economics in 1957 and married her fellow student Ove Rehn. After spending some time as a stay-at-home mother, Rehn became an office manager in the family business in 1960. At the same time, she provided vocational guidance at her former school in Kauniainen and brought Tupperware products and parties to Finland.

Rehn started her political career on the Kauniainen City Council and was eventually elected to Parliament for the first time in 1979. Rehn, who had chaired both the Parliamentary Legal Affairs Committee and her parliamentary group, was appointed to Prime Minister Harri Holkeri’s Cabinet somewhat unexpectedly, when the portfolio of the Minister of Defence became vacant as a result of a ministerial reshuffle in her Swedish People’s Party. Rehn became the first woman both in Finland and in the whole world to serve as Minister of Defence in a full-time capacity.

After bringing in a hefty number of votes in the subsequent Parliamentary election in 1991, Rehn continued as Minister of Defence in Prime Minister Esko Aho’s Cabinet. In addition to improvements to garrisons, Rehn set in motion a process that eventually led to women’s access to voluntary military service. A key project was a contract to buy Hornet fighter jets from the United States, where Rehn made an official visit as the first Finnish Minister of Defence to do so. As Minister of Equality Affairs, she implemented the so-called quota law ensuring equal representation of genders on public committees and working groups.

Popular among both Finnish-speaking and Swedish-speaking linguistic groups, Rehn made it through to the second round run-off against the Social Democratic Party’s Martti Ahtisaari in the 1994 Presidential election. Even though Rehn was not elected in the end, she is considered to have cleared the way for Tarja Halonen, who won the 2000 Presidential election. Rehn also stood as a candidate on that occasion, but was eliminated in the first round. She has later stated that she was no longer able to find motivation for Finland’s problems after visiting the Balkan crisis areas.

After the Presidential election and a short stint at the European Parliament, Rehn embarked on international duties. Having chaired the Board of Directors of the Finnish Committee for UNICEF from 1987 to 1993, Rehn was a candidate for Executive Director of UNICEF in 1994, but came in second. The following year, she was invited by UN Secretary-General Kofi Annan to become a human rights observer in the former Yugoslavia region. In 1998, Rehn became UN Under-Secretary-General and Special Representative of the Secretary-General in Bosnia and Herzegovina.

In the early years of the 21st century, Rehn served in various expert roles, especially in human rights issues and peace-building processes. She has been active in Women’s Bank and the UN Development Fund for Women (UNIFEM). Rehn has also held numerous positions of trust in organisations such as the Finnish Red Cross, WWF Finland and Women’s National Emergency Preparedness Association.

“I was saved by the old Infantry General Adolf Ehrnrooth, who said to the generals, ‘let’s give the lass a chance, then we can judge her’.” (Elisabeth Rehn in a Prime Minister’s Office interview on 1 March 2017, on the early stages of her role as Minister of Defence.)

Elisabeth Rehn and Arja Alho discuss the role of women ministers on the YLE programme Kolmas valtiovalta in Swedish (with subtitles in Finnish) on 19 February 2011.