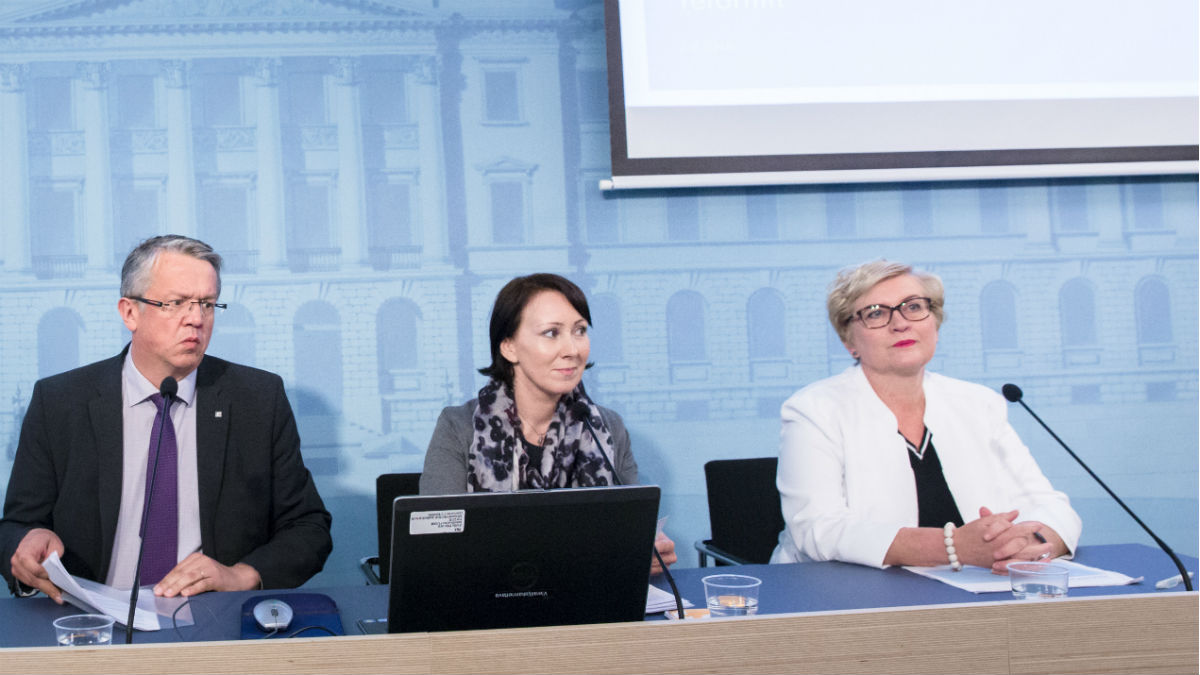 Ministers Hanna Mäntylä, Juha Rehula (on the left) and Anu Vehviläinen at a press briefing on the progress of the Government’s spearhead projects, held on 3 September 2015. Sakari Piippo/Prime Minister's Office

Hanna Katariina Mäntylä is the first female minister of the Finns Party. In 2017, Mäntylä moved on to the post of Special Advisor at the Secretariat of the Council of Europe.

Hanna Mäntylä grew up in the Lahti region. She quit upper secondary school after having spent a year as an exchange student in Argentina. She then studied nursing and graduated as an auxiliary nurse. Mäntylä worked in an employment office, as a special youth worker and in different positions in the care sector for ten years. In 2002, she founded a women’s underwear shop in Lahti.

Mäntylä moved to Lapland in 2007. She began to study social work at the University of Lapland, but left her studies when she entered the world of politics. Mäntylä joined the Finns Party in 2010 and was already elected as a Member of Parliament the following year. She soon became one of the key influencers in her party and served as one of the party’s deputy chairs from 2011. During her term as a Member of Parliament, Mäntylä presented in public her party’s views on matters such as alcohol policy and healthcare for paperless immigrants.

In Parliament, Mäntylä became the Finns Party’s expert on social and health care issues. She was a member of the Social Affairs and Health Committee and the chair of the Finnish Delegation to the Conference of Parliamentarians of the Arctic Region. Mäntylä was appointed as Minister of Social Affairs and Health to Juha Sipilä’s Government in spring 2015. Mäntylä’s most central tasks were related to the social and health care reform, and she also took a stand on the situation regarding asylum seekers and the need to reform social security.

In summer 2016, Mäntylä announced she would resign from her ministerial position because of the illness of a close family member. Pirkko Mattila, another key female politician from the Finns Party was chosen to replace her.  Mäntylä continued her work as a regular Member of Parliament.

In July 2017, Mäntylä asked to be released from the office of Member of Parliament. She moved on to the post of Special Adviser at the Secretariat of the Council of Europe. Mäntylä’s tasks in the Secretariat are related to the prevention of radicalisation with an emphasis on youth issues and to the prevention of discrimination and marginalisation.