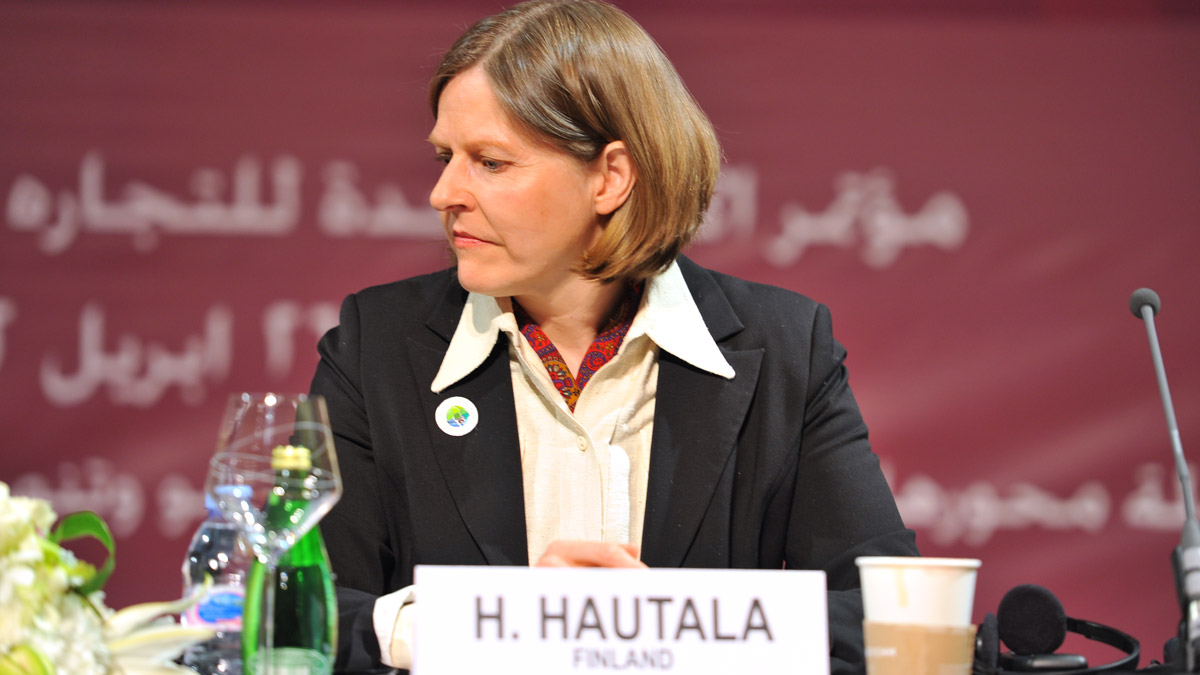 “A politician must put up with contradictions. I try to find a balance. This is like walking a tightrope.”

Minister of Development Heidi Hautala attending the UN Conference on Trade and Development in Qatar on 22 April 2012. UNCTAD

Heidi Anneli Hautala is a founding member of the Green League and one of its most influential figures. She is also one of Finland’s longest-serving and best-known Members of the European Parliament.

Hautala, who moved from Oulu to the capital Helsinki as a child, studied horticulture and graduated as Master of Science in Agriculture and Forestry. In the early 1970s, she was involved in establishing Finland’s first vegetarian restaurant in Helsinki and editing the new cultural and opinion journals, Uuden Ajan Aura (‘The Plough of New Age’) and Suomi (‘Finland’). In particular, Hautala became interested in opposition to nuclear power, environmental issues and feminism. Eventually, the community that had evolved around the restaurant and journals formed a political party, the Green League. Hautala became its Chair for a period from 1987 to 1991.

Hautala was first elected to Parliament at her third attempt in 1991. She later served as Member of Parliament for a second time from 2003 to 2009 and also chaired the Green Party Parliamentary Group for part of this period. Environmental protection, development cooperation and human rights have been among Hautala’s key political themes. Hautala stood as the presidential candidate for the Greens on two occasions, in 2000 and 2006.

After a period of six years as an MP in Finland, Hautala returned to the Euro Parliament in 2009 and went on to chair its Human Rights Sub-Committee. Her term was cut short when she was invited to join Prime Minister Jyrki Katainen’s Cabinet as Development Minister. During Hautala’s term, current issues included Syrian refugees and the status of development aid in developing African countries.

Hautala’s ministerial portfolio also included state ownership steering issues, which attracted a lot of publicity. In October 2013, Hautala resigned from her position as a result of a political steering incident involving Arctia Shipping, a state-owned enterprise. She returned to her MEP’s seat in 2014. During the first half of the parliamentary term, she acted as co-president in the Euronest Parliamentary Assembly. In October 2017, Hautala was elected as a Vice-President of the European Parliament.

Hautala has held a large number of positions of trust relating to development cooperation, equality and environmental issues: she chaired the Finnish Service Centre for Development Cooperation (KEPA) from 2002–2007 and the Council for Gender Equality from 2007 to 2011, etc. Hautala also served on the Helsinki City Council from 1985 to 1994 and from 2008 to 2014.

“A politician must put up with contradictions. I try to find a balance. This is like walking a tightrope.” (Talvitie, Eveliina: Keitäs tyttö kahvia. Naisia politiikan portailla. [‘Put the kettle on, girl. Women on the political ladder.’] WSOY, 2013, p. 47.)

“In my view, what you do must be in harmony with your goals.” (Talvitie, Eveliina: Keitäs tyttö kahvia. Naisia politiikan portailla. [‘Put the kettle on, girl. Women on the political ladder.’] WSOY, 2013, p. 48.)

Heidi Hautala the minister responsible for the ownership-steering of State-owned companies comments on company managements' interests on YLE's MOT programme on 24 February 2012.