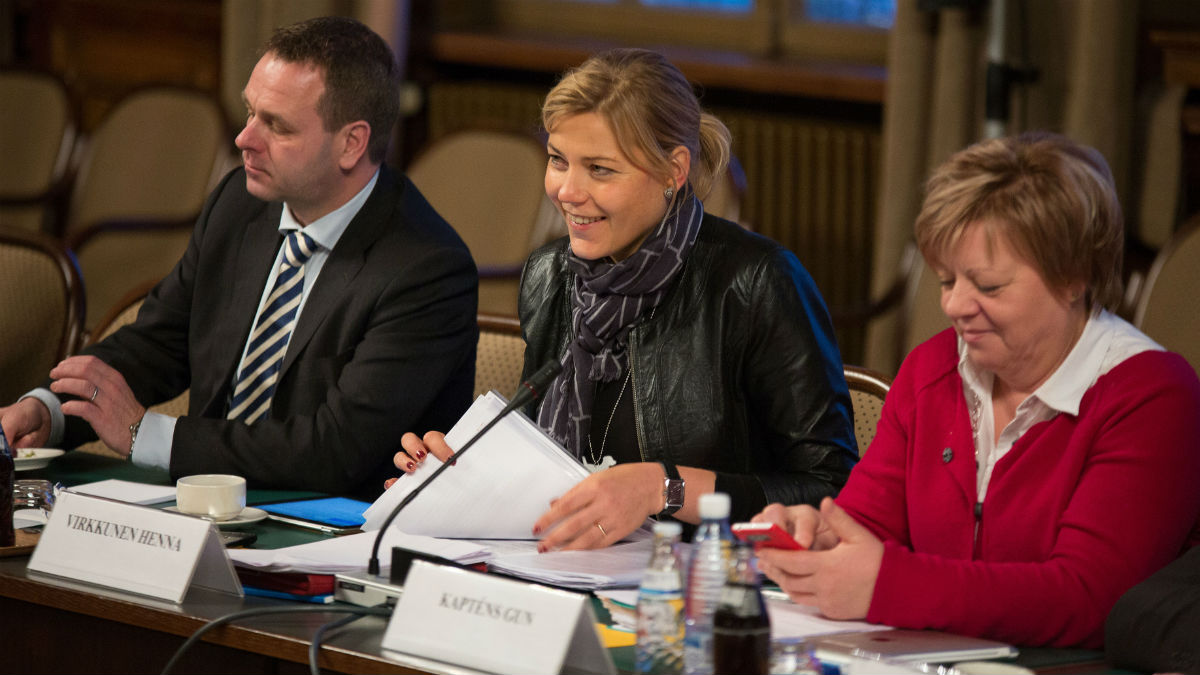 “People do not want to give women too much room, they want to stick to the traditional roles. I find feminism quite natural because I am fairly liberal and want to be involved in breaking boundaries.”

Henna Virkkunen, Minister of Administration and Municipal Affairs, at a negotiation on structural reforms on 29 November 2013. Jan Vapaavuori, Minister of Economic Affairs, on the left; on the right, Gun Kapténs, Special Advisor to the Minister of Defence. Laura Kotila/Prime Minister's Office

Henna Virkkunen, an experienced municipal politician, was appointed as a minister during her second year as a Member of Parliament.

After comprehensive school, Henna Virkkunen pursued her interest in horses instead of going to upper secondary school. She competed in show jumping and trained horses for competitions in Denmark until 1993. Virkkunen studied journalism and speech communication, graduating with a Licentiate of Philosophy degree from the University of Jyväskylä in 2006. Her licentiate thesis dealt with resignations of ministers.

Alongside her studies, Virkkunen worked as a journalist in the newspaper Keskisuomalainen from 1993 to 1998 and as a communications coordinator and shareholder in Medita Communications from 1998 to 2002.

Virkkunen was elected to Parliament on her third attempt in 2007. She served as a member of the Environment and Education Committee and the Culture Committee and was a deputy member in several others. During her second year as a Member of Parliament, she was appointed as the Minister of Education to Matti Vanhanen’s Government to replace Sari Sarkomaa, who had requested permission to resign. She continued in the post in Mari Kiviniemi’s Government. During Virkkunen’s terms as Minister of Education, the Universities Act was reformed and a proposal was made for the new distribution of lesson hours in comprehensive schools; however, the latter fell through as it was opposed by the other parties.

Virkkunen was appointed as Minister of Public Administration and Local Government to Jyrki Katainen’s Government, and transport was also added to her portfolio when Merja Kyllönen left the Government. The key issue during the Government term was the reform of local government structures, which combined four extensive legislative projects.

Virkkunen was expected to follow Jyrki Katainen as the party’s chair, but she did not stand for election in 2014. Instead, she focused on the elections to the European Parliament and was elected. In the European Parliament, Virkkunen is a member of the Industry, Research and Energy Committee and a deputy member of the Transport and Tourism Committee.

“People do not want to give women too much room, they want to stick to the traditional roles. I find feminism quite natural because I am fairly liberal and want to be involved in breaking boundaries. But of course, I value the traditional women’s jobs as well.” (Talvitie, Eveliina: Keitäs tyttö kahvia. Naisia politiikan portailla. WSOY, 2013, p. 190)

Minister Henna Virkkunen is being interviewed on a YLE programme “Ykkösaamu” on municipal mergers on 21 April 2012.