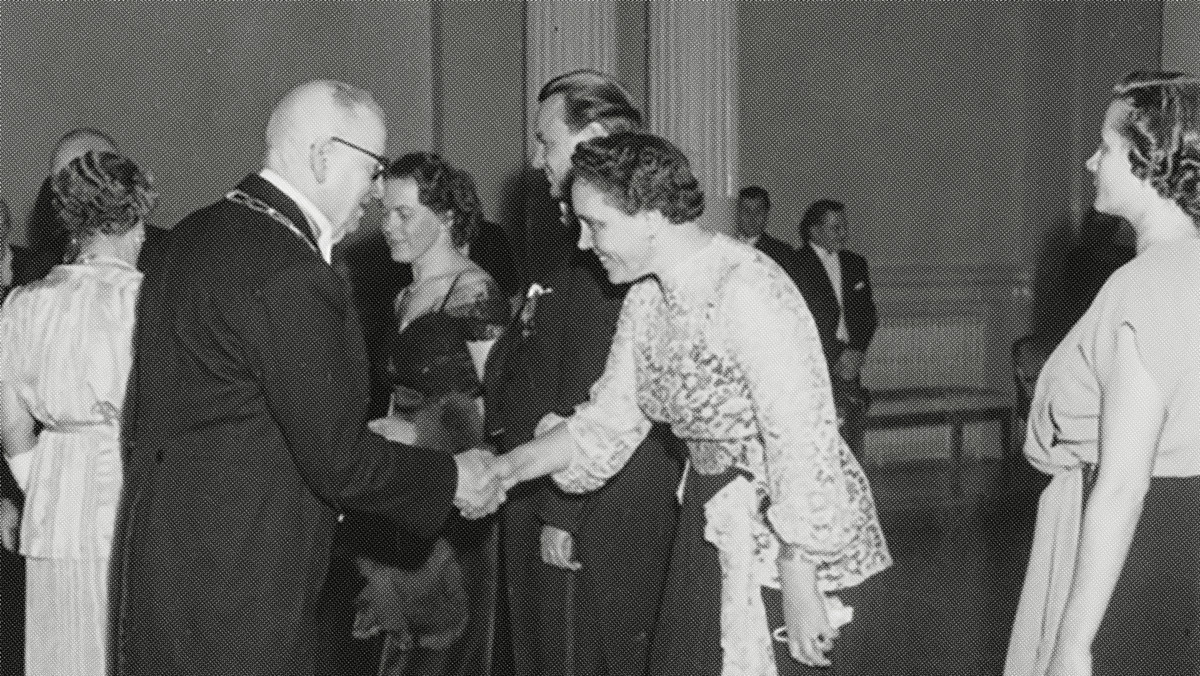 After the war, Hertta Kuusinen was one of the most well known politicians in Finland. In the late 1940s, she became the second female minister in Finland’s history.

Member of Parliament Hertta Kuusinen shakes President Paasikivi’s hand at the Independence Day reception at the Presidential Palace in 1949. Paavo Poutiainen/National Board of Antiquities

Hertta Elina Kuusinen was the most influential female politician of her era, and Finland's second ever female Minister of Parliament. Her father Otto Wille Kuusinen was a member of the Soviet Union's Communist Party the Politbyroo.

Hertta Kuusinen grew up as a supporter of her father's O. W. Kuusinen's ideology. Kuusinen attended school in Helsinki and Jyväskylä. She also spent time at her mother's family's estate in Luhanka. In 1922, Kuusinen joined her father in Moscow, where she worked as a librarian and a teacher. She was married from 1923 to 1933 to Soviet general and journalist Tuure Lehén, and the couple had one son, Yrjö (Juri), who died of pneumonia at the age of 17.

At the beginning of the 1930s, Kuusinen was an anti-fascist observer in Germany until she returned to Finland under an alias. Even so, she was caught and sent to prison for five years on charges of engaging in collusion to commit treason.

Kuusinen, who was released in 1939, hid in Luhanka for the duration of the Winter War, but was arrested once again before the Continuation War. She was placed in a so-called safe hold as a politically untrustworthy person. After the wars, communist activities were once again permitted. Kuusinen focused her efforts on building a new coalition the Finnish People's Democratic League (SKDL). Kuusinen served as a member of the Finnish Communist Party (SKP) committee, which was part of the SKDL for the duration of her entire career and as Secretary-General of the SKDL from 1952 to 1957.

For the predominant part of her career, Kuusinen was one of the country's most popular parliamentarians. She was voted into Parliament in 1945, and became for first female party group chair, serving in the position for a total of 11 years. In Parliament, Kuusinen led the Education and Culture Committee and was a member of the Foreign Affairs Committee. Her language skills and international relations proved very helpful in her tasks in the Inter-Parliamentary Union and the Nordic Council.

As a decision-maker, Kuusinen opened the way for women's participation in society. Kuusinen was a general politician, whose work centred on improving social security, labour rights and foreign policy. She promoted the reform of the National Pensions Act and extending health insurance to all citizens. During Kuusinen's time, social legislation was developed; the work week was made shorter, and maternity leave and legislation on child subsidies were reformed.

Kuusinen became recognised for her part in the Finnish Broadcasting Company's Pienoisparlamentti programme, in which she stood out as a skilled speaker in the male-dominated group or parliamentarians. She had strong public approval, which brought the highest number of votes in the 1958 and 1962 parliamentary elections. Kuusinen worked for just over two months as a minister in Pekkala's government, first without a specific area of responsibility and then as the second minister of the Prime Minister's Office. She was Finland's second female minister preceded only by Miina Sillanpää. Kuusinen acted as a member of Finland’s electoral college a total of four times.

The SKP dispersed at the end of the 1960s. Kuusinen remained a member of the party's committee and maintained good relations with the Soviet Union, but opted out of topical politics. For her last working years, 1969-1974, she lived in Berlin and served as the chairperson of the Women's International Democratic Federation.

Kuusinen enjoyed culture in a multitude of forms. Over the course of her career, she wrote one children's book as well as a great many poems, prose and letters, which have been published after her death.