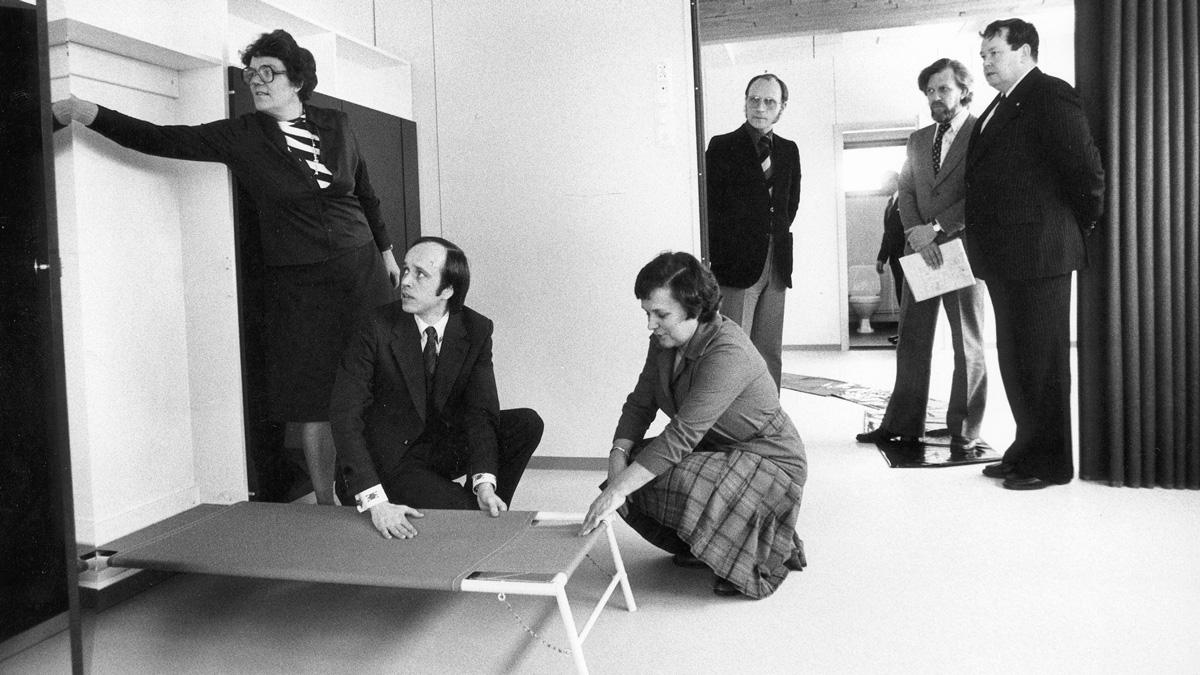 Irma Toivanen held the post of the Minister of Social Affairs and Health in the 1970s. In particular, she was an advocate for concerns of the ex-members of the Lotta organisation – women’s wartime auxiliary services – and of war veterans.

A proponent for war veterans and Lotta Svärd volunteers, Irma Hellin Toivanen was one of the Liberal People's Party’s key politicians during the 1970s.

Irma Toivanen, who was born in Kymi, worked as a Lotta medic during the Winter War. Veterans' and Lottas' affairs were an important issue to her throughout her life. Toivanen graduated with a school teacher qualification in 1942 and worked at various educational institutions for nearly 30 years. Her longest position was that of a primary and secondary school teacher in Kaarina, where she was appointed to tenure as a lecturer in 1975. She married Rector Aappo E. Toivanen, and they went on to have four children. The couple were members of the People's Party of Finland established in the 1950s and known as the Liberal People's Party from 1965 onward.

Toivanen participated first in Kaarina's and later Turku's municipal governance from the 1960s to the 1980s. She was the first woman to be a member of the Turku City Council. She was first voted into Parliament in 1970.  In addition to her active participation in teachers' unions, her election into Parliament was also due to votes "willed to her" by Irma Karvikko [linkki ministerigalleriaan].

As a Member of Parliament, Toivanen focused particularly on matters related to education in her role as a member of the Education and Culture Committee. The comprehensive school reform was currently underway, and this was a sector Toivanen was very familiar with. Toivanen, who was also a member of the Finance Committee, gained a key role in her party, and in 1973 she was appoint the chairperson for the party's parliamentary group.

Toivanen was one of the candidates to receive the largest number of votes in the 1975 elections. She was appointed as her party's only Minister of Parliament to Miettunen's second cabinet. The cabinet was a crisis time cabinet and its term run for less than one year. Toivanen, who held the position of Minister of Social Affairs and Health, continued in the same position also during Miettunen's third cabinet. Her term as Minister of Parliament lasted 1.5 years, and her key achievements included reaching a consensus on a broad-scoped pension policy programme as well as seeing through an appropriation for the rehabilitation of veterans that she had supported.

Toivanen left Parliament in 1979, but continued her work as chairperson for the Liberal People's Party's women's organisation. She was the founder of the Turku region Lotta Heritage Association and chairperson for the association from 1994 to 2003, as well as an honorary member of the Finnish Lotta Heritage Organisation. Additionally, she held numerous other positions of trust in local heritage organisations, youth organisations and national defense. In 2003, Toivanen was awarded the Cross of Liberty, 2nd Class in recognition of her work for the good of national defense.

Toivanen worked as one of six advisers during the 2005 filming of Finnish film "Lupaus", which was commissioned by the Lotta Svärd Foundation.