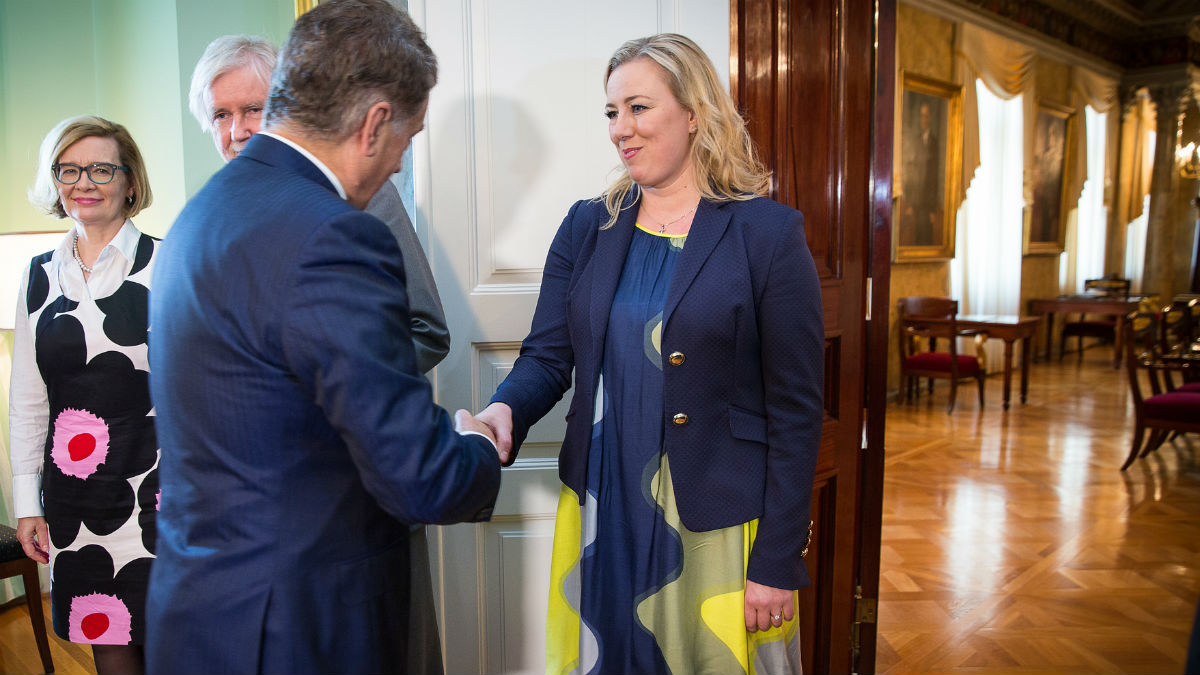 Jutta Urpilainen was the first female Minister of Finance. During her tenure, Finland was engaged in negotiations on the provision of help to countries in the euro zone affected by the economic crisis.

Sauli Niinistö, President of the Republic, at the Government Palace, greeting Jutta Urpilainen, who is leaving her ministerial duties on 6 June 2014. On the left, Paula Risikko and Erkki Tuomioja. Laura Kotila/Prime Minister's Office

Jutta Pauliina Urpilainen was the first woman to act as Finland's Minister of Finance and as party leader for the Social Democratic Party.

Jutta Urpilainen had planned a career as a musician, but chose teaching instead. In 2002, she graduated from the University of Jyväskylä with a Master of Arts in Education. She worked as a class teacher in Helsinki as well as in her home town of Kokkola. Urpilainen also worked as Member of Parliament Säde Tahvanainen's assistant and chairperson for the European Movement in Finland.

Her father Kari Urpilainen was a Member of Parliament from 1983 to 1995 and again from 1999 to 2003. Jutta Urpilainen began her own parliamentary career in 2003 as Central Ostrobothnia's first female Member of Parliament She has been involved in politics as a member of the Social Democratic Party's youth and student organisations from the time she was in upper secondary school. Urpilainen was elected to the Kokkola City Council in 2000, and she was its first female chairperson from 2015 to 2016. From 2007 to 2008, she was also the chair of the Assembly of the Regional Council of Ostrobothnia.

During her second term in Parliament, Urpilainen somewhat unexpectedly beat Erkki Tuomioja in her party's party leader election. Her term as the first female party leader of the SDP lasted from 2008 to 2014. Urpilainen was also the first woman to act a Minister of Finance and thus as Deputy Prime Minister in Katainen's cabinet.

During Urpilainen’s term, the economic crisis hit both Finland and the EU, and, in relation to this, Finland required that crisis countries provide collateral in exchange for the financial support provided by Finland. Urpilainen's agenda also included tackling the black economy and tax arbitrage. The Financial Times ranked her as Europe's fourth best Minister of Finance in 2012.

After serving as a minister and as party leader, Urpilainen was asked to take the position of Deputy Managing Director of the International Monetary Fund (IMF), but she decided to continue her work as a Member of Parliament in Finland. In Parliament, she has been a member of numerous committees, held the position of first Deputy Speaker, as well as that of the chair for the Finnish IPU group's executive committee. She was also the deputy chair of her parliamentary group from 2007 to 2008. In early 2017, Urpilainen stated that she would not stand as the SDP's presidential candidate citing family reasons.

Urpilainen has held an extensive list of positions of trust. She has been a member of the National Commission on Sustainable Development, has represented Finland at UN conferences concerning information society and has chaired the Finnish National Commission for UNESCO from 2015. She was the Executive Director of the UN Association of Finland from 2008 to 2009. In summer 2017, Minister for Foreign Affairs Timo Soini appointed Urpilainen his Special Representative on Mediation with a focus on strengthening the status of women and youths in Africa.