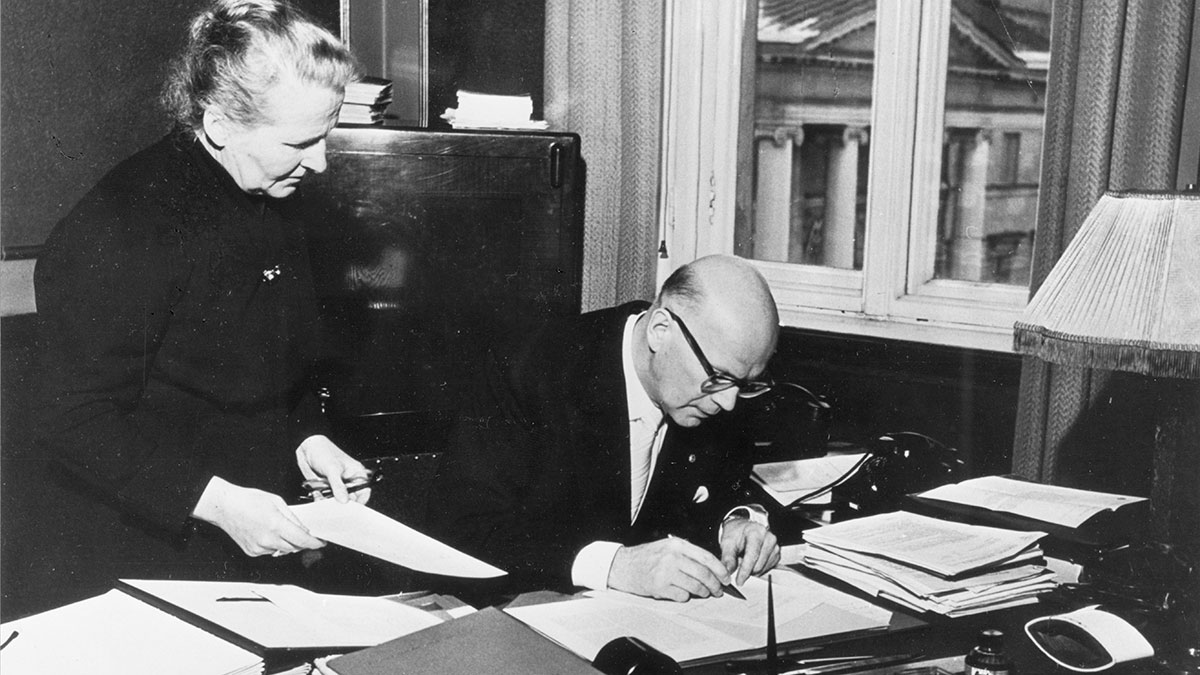 "I feel that the differing views of men and women should be constructively adopted also in parliamentary work. At present, women's views are very rarely brought forth, although women account for the majority of voters."

President Kyösti Kallio's daughter Kerttu Saalasti was Finland's first woman to act as Minister of Education. She was also influential in the founding of the University of Oulu.

Kerttu Saalasti was born in Nivala as the third child of President Kallio and Kaisa (nee Nivala) Kallio. In 1927, Saalasti graduated from upper secondary school in Oulu. After a few years tending to cattle at home, she continued her studies at the University of Helsinki.  Saalasti graduated with a Bachelor's Degree in Agriculture and Forestry in 1935 and a Master of Science in Agriculture the following year. She married her childhood friend agriculture technician Teuvo Saalasti, and the couple moved to the Nivala to manage a farm. Kerttu Saalasti taught agriculture and livestock farming at the Raudaskylä folk high school.

In 1936, Saalasti was elected as the only woman to the Nivala municipal council, and she also took on other positions of trust. The Saalastis had five children of whom the youngest was born in 1947 just after Teuvo Saalasti had died of lung disease. The following year Kerttu Saalasti, who was now a single mother, was elected a Member of Parliament and re-elected until 1962. She was a Member of Parliament again from 1966 to 1970 after which she withdrew from politics.

Saalasti placed an emphasis in particular on education and culture as well as issues related to agriculture and the rural population. Family policies and the sobriety movement were matters close to her heart, as was the status of women in politics. Saalasti was a member of the Education and Culture Committee for the entire duration of her time in Parliament. She acted as deputy chair of the Grand Committee and was a member of the electoral college four times. She became a significant female actor in the Agrarian Union and was appointed to positions of trust including chair of its women's organisation, a member of the party board and finally the deputy chair of the party in 1964.

Saalasti was the first woman to act as Minister of Education. She held the position during Kekkonen's fifth government and Sukselainen's first government. Saalasti campaigned for regional equality in education. Her most significant achievement is likely the founding of the University of Oulu in 1959. In addition to this, during her terms other large projects such as a reform of primary education legislation, the creation of a comprehensive school and the administrative reform for higher education institutions.

Saalasti, who began her career as a decision-maker in a youth organisation participated in the work of numerous civil society organisations. Especially associations that promoted culture and agriculture, such as Suomen säveltaiteen tuki and Maa- ja kotitalousnaisten järjestö were important to her. Saalasti was an avid writer of newspaper articles and poems as well as an enthusiastic amateur artist and musician.  After she withdrew from politics, she wrote a book about her parents titled Anna hänelle nöyrä mieli (WSOY 1972).

In 1969, Saalasti was bestowed the title Opetusneuvos, and in 1972 she was given an honorary Doctoral degree by the University of Oulu. At the beginning of 2017, the University of Oulu's Oulu Southern Institute was renamed the Kerttu Saalasti Institute. This was in honour of both the centennial of Finland's independence as well as the 110th anniversary of Saalasti's birth.

"I feel that the differing views of men and women should be constructively adopted also in parliamentary work. At present, women's views are very rarely brought forth, although women account for the majority of voters. I would like to see more consensus and a national perspective in finding resolutions to issues." (Eskelinen, Heikki (Ed.): He edustavat meitä. Kansanedustajamme kertovat itsestään. WSOY, 1966, p. 286).