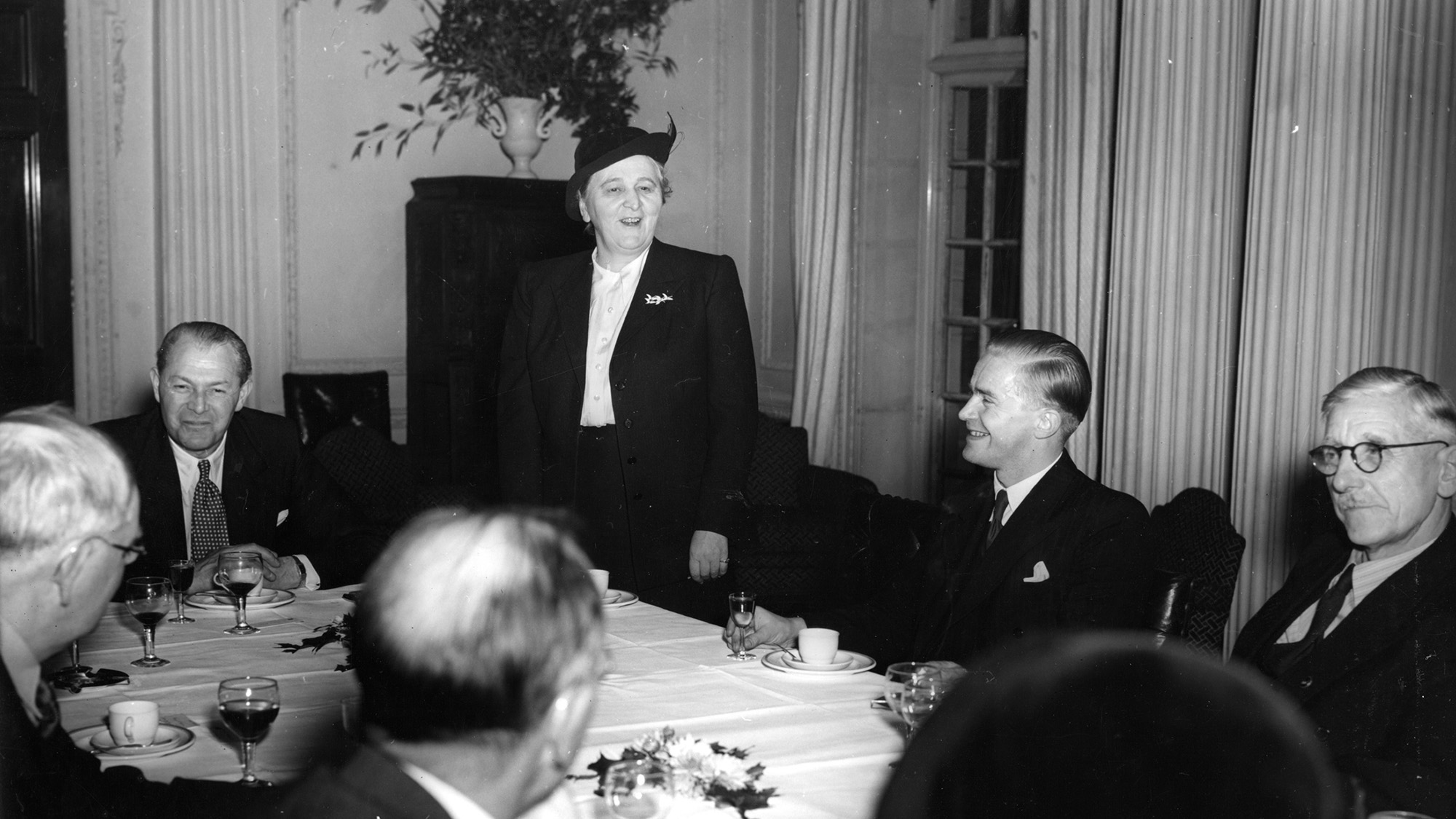 Kyllikki Pohjala’s career in politics spanned three decades. Holding the post to the Social Minister in the early 1960s, she pushed through the Act on Sickness Insurance.

Finnish Members of Parliament visiting the British Parliament in 1948. Kyllikki Pohjala expressing the thanks of the delegation to the hosts. On her right, Member of Parliament Varma Kosto Turunen. Työväen Arkisto

Kyllikki Pohjala was a powerhouse of health care and social politics and the ‘mother’ of the Health Insurance Act.

Kyllikki Pohjala started out as a reporter for the Satakunta newspaper in 1914, but she embarked on her true lifelong career after graduating as a registered nurse in 1917. She provided nursing care on the fronts of both the 1918 Finnish Civil War and the Estonian War of Independence of 1918 to 1920. In the early 1920s, Pohjala decided to seek further training in the United States. She obtained the money and language skills required for her studies by working at New York hospitals for five years and graduated as a nursing teacher from Columbia University in 1927.

Pohjala continued as a journalist, working as the Editor-in-Chief of the Sairaanhoitaja nursing trade magazine for almost 40 years. She felt that the magazine was a good medium for spreading new information and increasing social awareness among registered nurses. Pohjala was also President of the Finnish Nurses Association from 1935 to 1963.

In 1933, Pohjala launched her 30-year political career at the urging of her colleagues. She chose her party only after she had started as a Member of Parliament and aimed to work across party lines in order to promote issues that she considered important. These included health care and social welfare, in particular, for which she worked on the Parliamentary Grand Committee, the Commerce and Foreign Affairs Committees, and the Office Commission.

Among other things, Pohjala advocated for hospital construction projects, improvements to the status of registered nurses, municipal health services and provision of pastoral care in hospitals. Her interest in health care and social policies often led her to cooperate with left-wing representatives and she often pursued a more reformist agenda in these issues than her colleagues in the conservative National Coalition Party.

Pohjala was a member of Suomen Huolto, the Central Committee for the Organisation of Assistance to the Population of Finland, and coordinated assistance for the civilian population during the Russo-Finnish Winter and Continuation Wars (1939–1940 and 1941–1944). As a result of the wars, she became increasingly interested in foreign policy. Her interest culminated in chairing the Executive Committee of the Finnish Group to the Inter-Parliamentary Union (IPU) and membership in the Finnish Delegation to the UN General Assembly.

Pohjala was already about to give up her career as an MP, when she was appointed as Second Minister of Social Affairs to Prime Minister Ahti Karjalainen’s Cabinet in 1962. As Minister, Pohjala drafted the Health Insurance Act, which was also adopted during her term. Pohjala retired when the Karjalainen Cabinet resigned in December 1963. In 1966, she published a memoir entitled Kuljin tietäni [‘I trod my path’].