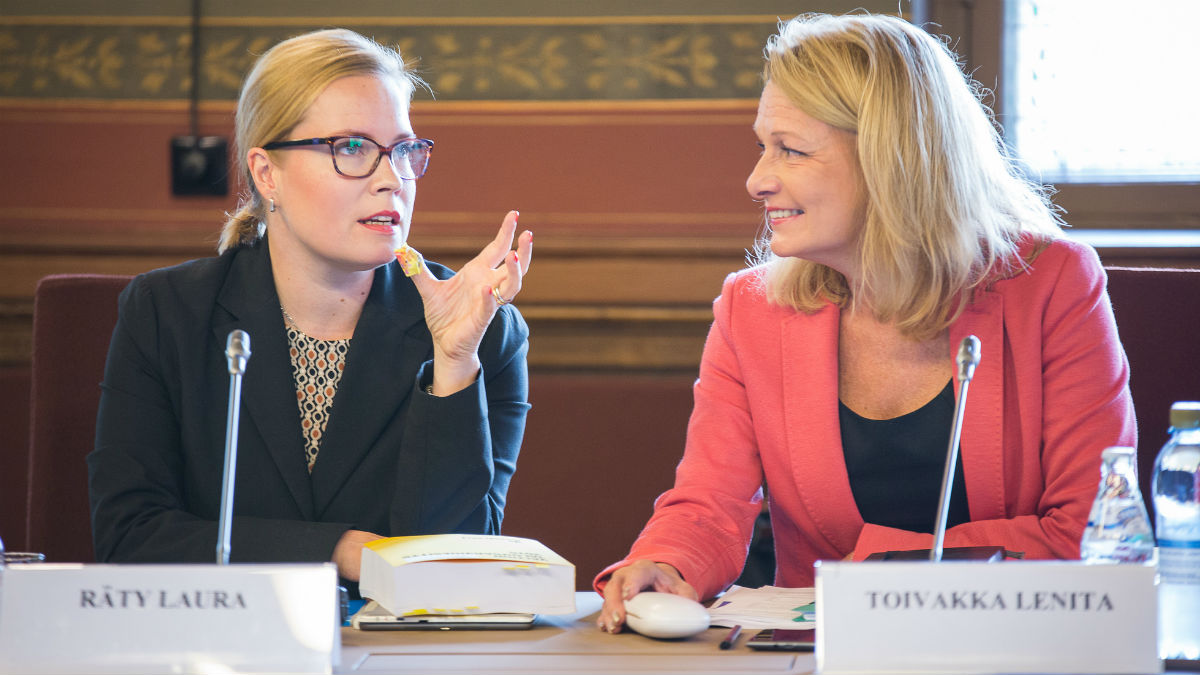 Laura Räty was Minister of Social Affairs and Health in the Stubb Government. She has also served as Deputy Mayor of Helsinki.

Minister of Social Affairs and Health Laura Räty at the budget negotiations at the House of the Estates on 27 August 2014 with Minister for European Affairs and Foreign Trade Lenita Toivakka. Laura Kotila/Prime Minister’s Office

Laura Räty, who served as Deputy Mayor of Helsinki, was appointed Minister of Social Affairs and Health from outside Parliament.

Daughter of two doctors, Laura Räty graduated as a doctor herself. She also studied political sciences, but was attracted by medicine more. Having graduated with a Licentiate of Medicine degree in 2006, she began specialising in anaesthesiology and intensive care, but did not complete her specialisation studies before entering the world of politics. Räty’s career as an influencer began in the student body of her primary school and the Union of Upper Secondary School Students. She joined the National Coalition Party at the age of 15. As a student, she was the chair of the Helsinki district of her party’s youth organisation.

Räty was elected to the city council of Helsinki in 2005 and during the following term was chosen as the chair of her city council group (2009), appointed to the city executive and became the leader of the party council of the National Coalition Party (2010). In the parliamentary elections of 2011, Räty fell 27 votes short of a seat in Parliament, but was appointed Deputy Mayor of Helsinki with the responsibility for social services and healthcare soon after that. She also served as the chair of the Board of Directors of the Local Government Pensions Institution Keva from 2013 to 2014.

Alexander Stubb chose Räty as the Minister of Social Affairs and Health in his Government. During the Government term lasting less than a year, Räty’s most central task was to continue the preparations for the social welfare and healthcare reform. She has taken a stand on the inequality of the healthcare system and supported freedom of choice and competitive tendering in health services.

Räty did not get elected in the parliamentary election of 2015 after her term as a minister and returned to her post as a deputy mayor. Räty resigned from the post in spring 2016 and became a business director at Terveystalo.

In her free time, Räty is a keen runner of marathons.