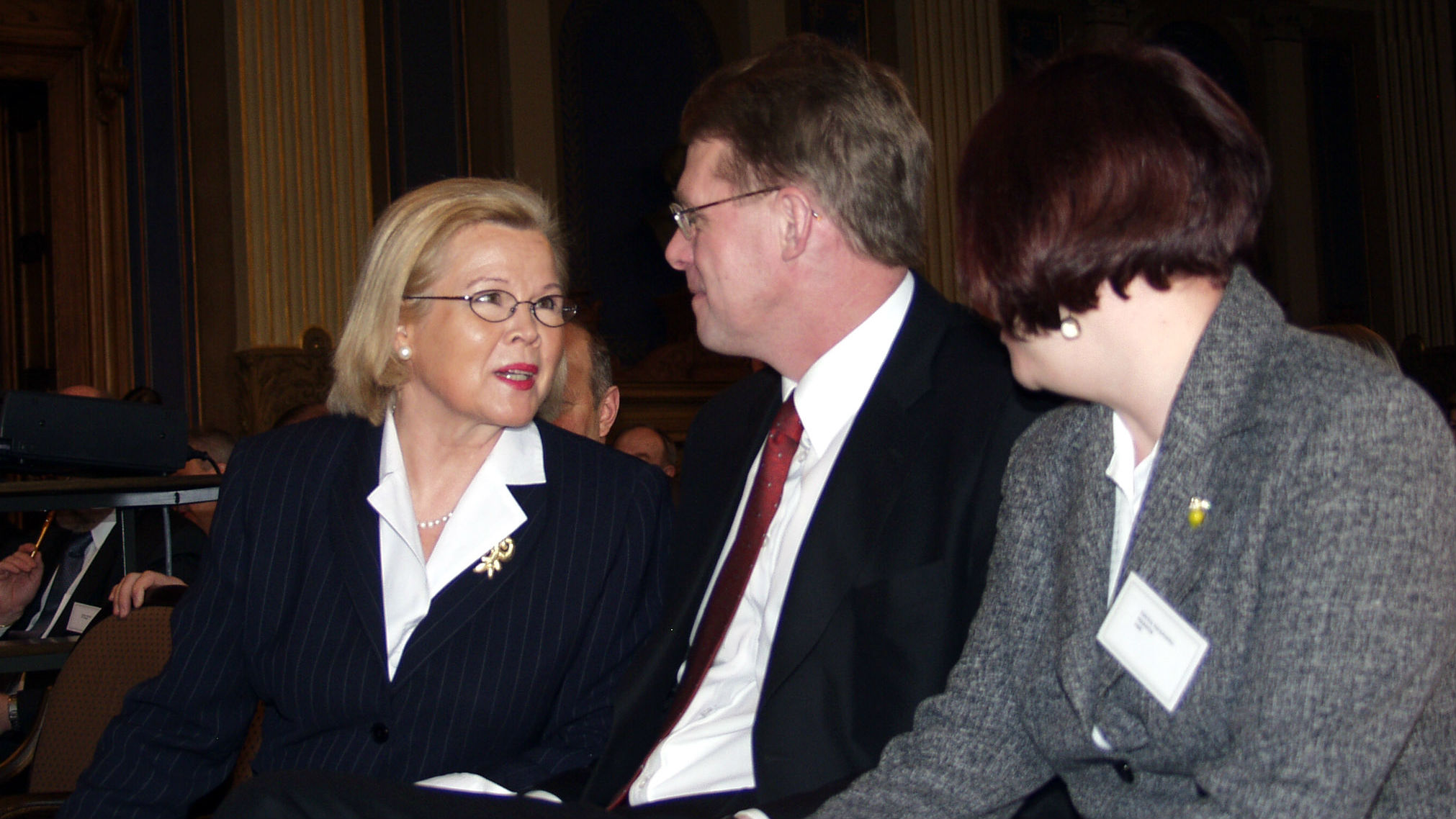 In the early 2000s, Leena Luhtanen held the post of the Minister of Transport and Communications and the Minister of Justice. She was a Member of Parliament for 16 years.

Minister of Transport and Communications Leena Luhtanen and Prime Minister Matti Vanhanen in the Government information society seminar at the House of the Estates on 23 November 2003. Prime Minister's Office

Leena Marjatta Luhtanen has served as Finland's Minister of Transport and Communications, and Minister of Justice.

Originally from Kuopio, Leena Luhtanen studied social policy and economics and graduated from the University of Helsinki with a Master's Degree in Political Science. She initially worked as a social worker and secretary before becoming a rapporteur, researcher and planning officer at the Ministry of Education in 1972. She worked as the Political Secretary for Minister of Social Affairs and Health Sinikka Luja-Penttilä from 1981 to 1982, after which she was appointed Secretary for Legislative Affairs of the parliamentary group of the Social Democratic Party. She continued her career in the Ministry of Education as Secretary of Science from 1985 to 1991.

Luhtanen's 16-year career as Member of Parliament started in 1991. Among other positions, she was a member of the Speaker's Council as well as the Legal Affairs Committee and the Grand Committee. She was the chair of the Commerce Committee from 1999 to 2003. Luhtanen was the Minister of Transport and Communications in Prime Minister Jäätteenmäki's and Vanhanen's Governments. During her term, a decision was made on the procurement of a new ice breaker, and the Act on the Protection of Privacy in Electronic Communications was advanced. The Konginkangas bus incident, the most serious road traffic accident in Finland, also took place during her term as minister. Other issued discussed at the time included the construction of broadband networks, pricing policy of telecommunications companies as well as supporting research on transport.

After the Social Democratic Party of Finland shuffled its ministers, Luhtanen was in charge of the position of the Minister of Justice at the latter half of Vanhanen's term. She was the first Minister of Justice without a higher education degree in law. During her term as Minister of Justice, Luhtanen's merits include driving the criminalisation of the purchase of prostitute services, advancing the Act on Assisted Fertility Treatments that takes into account female couples and single women as well as solving problems in prison financing.

Luhtanen was not re-elected after her term as Minister of Justice. She continued her nearly 30-year career in Espoo City Council, serving as its chair on numerous occasions. Luhtanen has been engaged in several positions of trust, including membership in the Advisory Board for International Health Issues (Kansainvälisten terveysasiain neuvottelukunta) and the Advisory Board for the Practice of Medicine (Lääkäritoimen neuvottelukunta). She is also an expert member of the World Health Organisation.

In the non-governmental sector, Luhtanen has also been influential in many associations in the field of health care. She has also served as the chair of the supervisory boards of Fortum, Espoo Electricity and Elanto.

Luhtanen was awarded with an honorary doctorate in veterinary medicine from the University of Helsinki in 1995.

YLE’s TV News, aired on 17 November 2005, on the competition of the investigation into a traffic accident which occurred at Konginkangas, the most deadly in Finnish history. Minister Leena Luhtanen’s comments at time stamp 1:47.