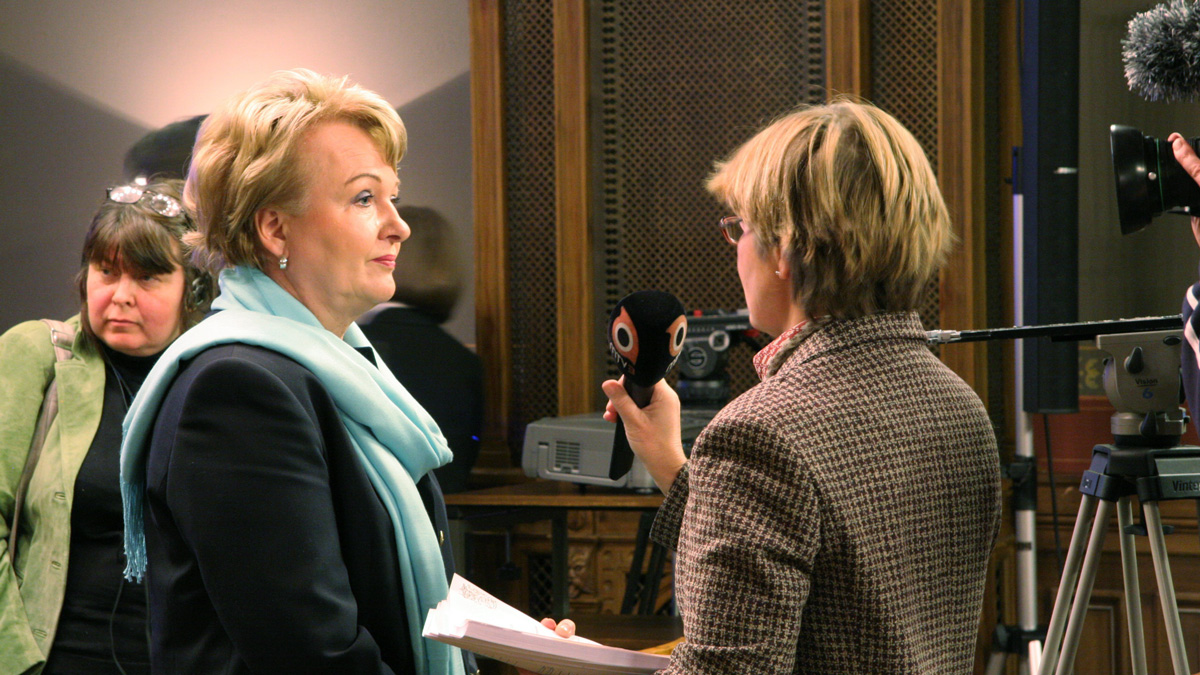 “I have inherited the strong genes of a family of strong women, especially from my grandmother. These include the ethos of coping: one had to manage, be competent and keep going.”

Minister Liisa Hyssälä being interviewed on the MTV3 channel on the national preparedness plan for an influenza pandemic on 15 March 2006. Prime Minister's Office

Liisa Marja Hyssälä was the first woman to serve as Director General of Kela, the Social Insurance Institution of Finland.

Liisa Hyssälä first completed a Master’s degree in political science in 1974, but decided to change to the field of dentistry. She received her doctorate in 1992. Before entering politics, Hyssälä worked as a private dentist and as a public health instructor and researcher at the University of Turku.

Hyssälä was elected to Parliament for the first time in 1995. She belonged among others to the Social Affairs and Health Committee and the Finnish Delegation to the Nordic Council. Hyssälä, who was relatively unknown to the general public, served as Minister of Health and Social Services in the Jäätteenmäki Government and continued in that post in the first Vanhanen Government.

She was Minister of Social Affairs and Health in the second Vanhanen Government. During Hyssälä’s term as minister, legislation on access to healthcare prescribing a waiting-time guarantee system was adopted, and transfer of the National Agency for Medicines (currently the Finnish Medicines Agency Fimea) from Helsinki to Kuopio was prepared. She also made decisions on guarantee pensions and the reference price system for medicines.

Hyssälä’s term as minister was interrupted when she was selected to be Director General of Kela, the Social Insurance Institution of Finland, in 2010. She was the first woman to hold this post. As Director General, Hyssälä launched public debate on many themes, including the housing allowance system and the system of reimbursement for medical expenses. She retired from Kela at the end of 2016 but soon became a senior advisor at Sitra, the Finnish Innovation Fund. She also founded her own company so that she could work with healthcare and social issues.

Hyssälä served on the Municipal Council of the Municipality of Lieto from 1993 to 2008 and as vice-chairwoman of the Managing Board of the Regional Council of Southwest Finland from 1996 to 2003. She has had positions of trust on the Council and the Board of the Finnish Dental Association. In 1995–1996 and 1997–1998, Hyssälä was chairwoman of the Southwest Finland District of the Women’s Organisation of the Centre Party.