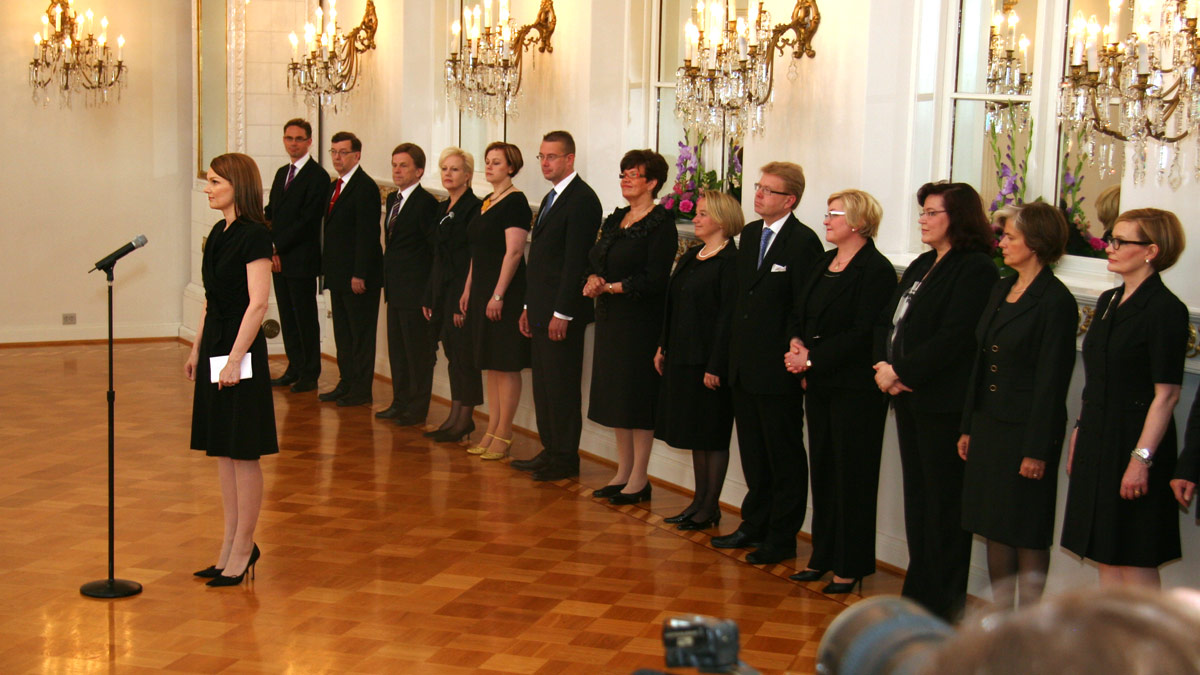 "Outside of the political spectrum... it has been typical for slightly older men to question whether women can be successful in the role of Prime Minister. I received praise especially from older men working in the corporate sector."

Mari Kiviniemi’s Government on its day of appointment on 22 June 2010 at the President’s Office. Prime Minister's Office

Mari Johanna Kiviniemi was the second woman in Finland to act as prime minister. In 2014, she was appointed Deputy Secretary-General of the OECD.

Mari Kiviniemi grew up in Jalasjärvi and comes from a family that supports Finland's Centre Party. She entered politics while she was still a student. She studied economics at the University of Helsinki and acted as the Chairperson of Finnish Centre Students from 1990 to 1991 and as a board member in the Nordic Centre Youth (NCF).

A year after graduating with a Master's Degree in Political Science, Kiviniemi was voted into Parliament. During her first term, she was a member of both the Parliament's Commerce Committee and Environment committee. Later, she also became a member of the Foreign Affairs Committee, as well as the chairman of the Parliamentary Supervisory Council.  Kiviniemi, who joined Finland's Centre Party in the early 1990s, was a member of the party's Council from 1992 to 1995 and served as the party's deputy chairman from 2003 to 2008.

Kiviniemi's expertise brought her the position of Ministerial Adviser in economic policy to Matti Vanhanen. At the same time, she served as acting Minister for Foreign Trade and Development while Paula Lehtomäki was on maternity leave.

Kiviniemi served in Matti Vahanen's second government as the Minister for Public Administration and Local Government. The most important project during her term as minister was the Restructuring of Local Government and Services Project (PARAS), which was not popular among Centre Party voters. Even so, Kiviniemi’s popularity saw her take over as party leader for the Centre Party when Matti Vanhanen stepped down. At the same time, she became Finland's second female prime minister.

Kiviniemi's one year term as prime minister was marked by the euro area's recession and by restructuring in Finland. The provision of financial assistance to the EU's Member States with excessive national debts, especially Greece was a divisive issue among Finns. The parliamentary elections that followed this government term saw support for Finland's Centre Party fall to a historical low. Kiviniemi felt that she did not have the party members' support and withdrew from her position as party leader in 2012. She remained a Member of Parliament for autumn 2014 after which she took over the position of Deputy Secretary-General for the Organisation for Economic Co-operation and Development (OECD).

Kiviniemi was a member of the Helsinki City Council from 2005 to 2012 as well as of the Helsinki-Uusimaa Regional Council from 2005 to 2007. She has held a large number of positions of trust in e.g. different organisations and as a member of the supervisory boards for state-owned enterprises such as VR, Alko and Leonia. She was the head of Nuori Suomi ry from 2006 to 2010.

"Kiviniemi, who was an exchange student in Saarbrucken, Germany, speaks fluent German.

"Outside of the political spectrum... it has been typical for slightly older men to question whether women can be successful in the role of prime minister.  I received praise especially from older men working in the corporate sector. (Interview with Mari Kiviniemi by the Prime Minister's Office, 17 March 2017)

"I have always been told I am too correct, reserved, distant. I was told I should be different. Easy-going, exciting. It isn't nice at all, to be told that you are very skilled, but have the wrong type of personality. (Talvitie, Eveliina: Keitäs tyttö kahvia. Naisia politiikan portailla. WSOY, 2013, p. 24)

Minister of Public Administration and Local Government Mari Kiviniemi is interviewed on YLE’s local election broadcast on 26 October 2008 while the votes are still being counted.