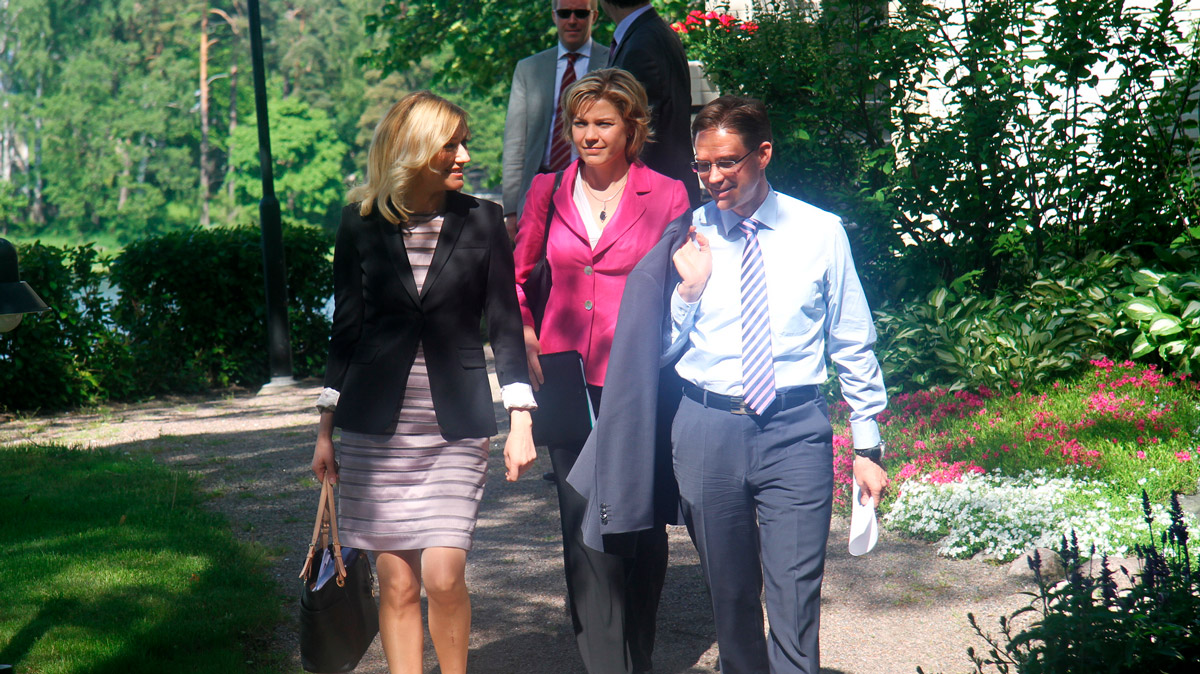 “I don’t see how that background in the entertainment industry would have diminished my ability to serve as a Minister or MP... We need people from different backgrounds in politics; otherwise we run the risk of developing tunnel vision.”

Maria Edith Guzenina was a well-known media figure before starting her first term as a Member of Parliament in 2007.

Maria Guzenina's mother is of Russian origin, and Guzenina speaks Russian fluently. She has lived in Washington, Madrid and London. Guzenina worked as a reporter for Radio Nova and Radio City and as a freelance reporter for the Finnish Broadcasting Company (YLE). She spent the period from 1993 to 1997 in London as the first Finnish presenter/reporter on the MTV Europe channel. She has written books and columns and run her own clothes shop while also doing some modelling.

In 2004, Guzenina stood as a candidate in the European Parliamentary election, but was not elected. That same year, however, she was elected to the Espoo City Council with the highest number of votes among female Social Democratic candidates and went on to chair the Health and Social Services Committee as well as the entire Council. The Parliament doors opened to her for the first time in 2007. Guzenina has served on the Social Affairs and Health Committee, the Administrative Council of the Finnish Broadcasting Company (YLE), etc.

Social and family policy themes have been important to Guzenina, and she was assigned the portfolio of the Minister of Social Services in Prime Minister Jyrki Katainen’s Cabinet. Her ministerial term was especially marked by the controversial health and social services reform. When the Social Democratic Party shuffled its ministers midway through the government term in 2013, Guzenina returned to her MP’s seat. Since that same year, she has chaired the Finnish Delegation to the Council of Europe.

Guzenina was a member of her party’s leadership and chaired Social Democratic Women from 2008 to 2012. She has held numerous positions of trust in bodies such as the Board of Directors of the Family Federation, the One Parent Federation in Finland, as well as the Filoksenia association helping children living in the streets of St. Petersburg.

“I don’t see how that [background in the entertainment industry] would have diminished my ability to serve as a Minister or MP. After all, a career as, say, an engineer does nothing to prepare you for politics either. Nor is it supposed to. We need people from different backgrounds in politics; otherwise we run the risk of developing tunnel vision. And that sort of thing does not make the world a better place.” (Talvitie, Eveliina: Keitäs tyttö kahvia. Naisia politiikan portailla. [‘Put the kettle on, girl. Women on the political ladder.’] WSOY, 2013, p. 108.)

On 12 October 2012, Minister of Health and Social Services Maria Guzenina-Richardson was a guest on YLE's news cast where she amended Johan Bäckman's claims to Russian media about the treatment of Russian families in Finland.