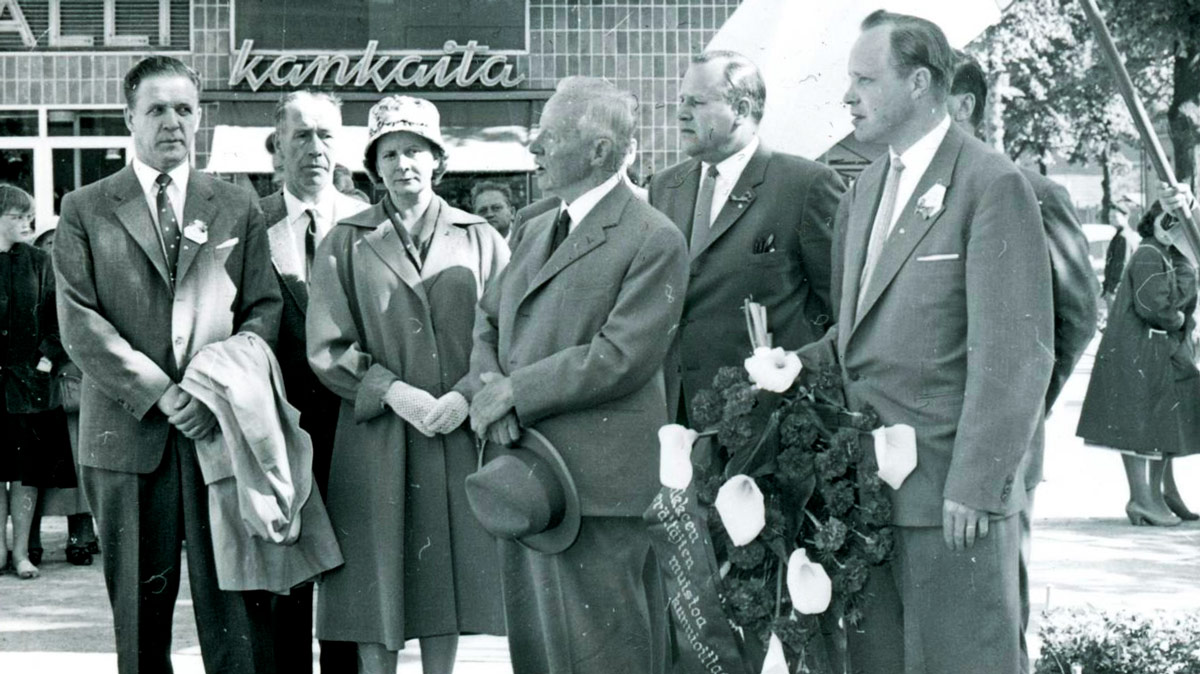 Meeri Kalavainen was a Member of Parliament for three decades and became the first President of the Council for Gender Equality in 1972.

Meeri Kalavainen listens to a speech by Chairman of the SDP Väinö Tanner (third from right) at the party’s 60th anniversary in Pori in the summer of 1959. On the left Johannes Koikkalainen and on the right Kaarlo Pitsinki holding a wreath. The Labour Archives

Meeri Sirkka Kalavainen was Finland’s first Minister of Culture and the first President of the Council for Gender Equality.

Growing up in Kotka, Meeri Kalavainen completed vocational school and also studied social subjects at adult education centres. She started out in politics at the age of 17 as Chair of Kotka Social Democratic Youth. During the Second World War, Kalavainen worked as a bank clerk. She then moved to Helsinki, working as a secretary for organisational and student affairs up until the start of her career in Parliament.

During her 30-year career as a Member of Parliament, Kalavainen focused on education, training, cultural and equality issues. She served on several parliamentary committees, including as Deputy Chair of both the Grand Committee and the Education and Culture Committee in the 1960s. She was also one of the Vice Chairs of her parliamentary group from 1967 to 1979.

Kalavainen was appointed as Second Minister of Education to Prime Minister Ahti Karjalainen’s Second Cabinet. For the first time, her portfolio also included the responsibilities of the Minister of Culture. Among other things, Kalavainen advocated for developing adult education and training and reforming the system of government aid for youth organisations. During her term, Provincial Arts Councils and summer events also received additional funds.

As Chair of the Federation of Social Democratic Women, Kalavainen helped unite the factions divided by a party schism. In 1972, she was appointed as the first President of the newly established Council for Gender Equality. One of the key issues in her work within women’s organisations was improving equality in the world of work, which involved efforts to develop both equal pay and day care and to modernise division of work within families.

Kalavainen was elected as presidential elector for four elections in the 1950s and the 1960s. She held several positions of trust in organisations such as Workers’ Educational Association WEA, Pajulahti Sports Institute and the Miina Sillanpää Foundation. Kalavainen stepped down as Member of Parliament in 1978 and resigned from her positions in women’s organisations in the early 1980s.