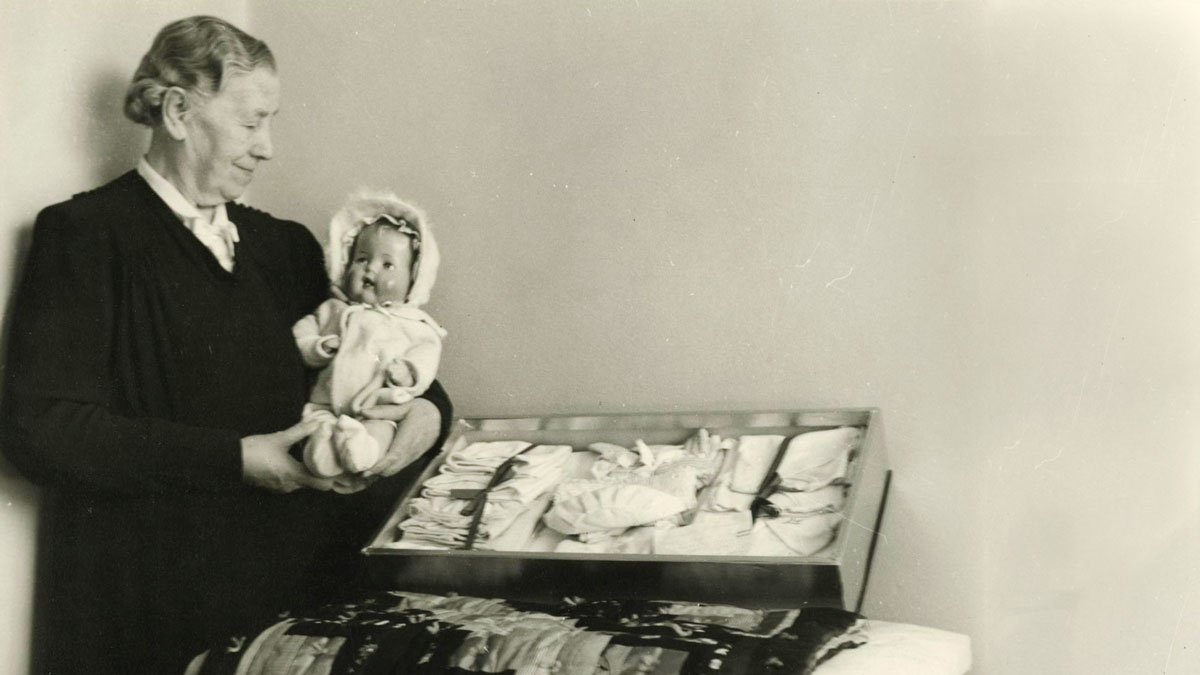 “By saving the mother, you save the child. Every child must be saved for life.”

Vilhelmiina Miina Sillanpää was Finland’s first female minister and is still one of the longest-serving female Members of Parliament.

Born into a tenant farmer’s large family in Jokioinen, Miina Sillanpää had to start working in a factory at the young age of 12 and only attended a circulating school and a factory school. As a young girl, she was eager to read everything she could lay her hands on. At the age of 18, she gained the opportunity to work as a servant in Porvoo and Helsinki.

In 1900, the 34-year-old Sillanpää took up the reins of the Helsinki Servants’ Home and Employment Agency. In 1916, she got a job as inspector of Cooperative Society Elanto restaurants, staying in this role until 1932 – also while serving as an MP.

Sillanpää’s activist role in society started as female servants and working-class women began to get organised. She joined the Social Democratic Party in 1904, convinced by its opposition to Russification efforts and fight for universal suffrage. Sillanpää worked as the Editor-in-Chief of some working women’s magazines and was active in the Social Democratic Women’s League from the very beginning.

Sillanpää emerged as a leading figure of the working women’s movement, becoming a celebrity who claimed a seat in Parliament in the country’s first general election in 1907. Her career as an MP continued up until 1948, with the exception of a few breaks. With 38 parliamentary sessions under her belt, Miina Sillanpää is still the second longest-serving female MP in Finland – her record was broken by Sirkka-Liisa Anttila in late 2016.

Sillanpää stayed out of politics during the 1918 Finnish Civil War, but went on afterwards to lead the Social Democratic Women’s League and serve on the Party Executive Committee. Her work in Parliament focused on improving the status of women and social policy reforms. Her career culminated in a short stint as Coordinate Minister of Social Affairs in Prime Minister Väinö Tanner’s minority government. Sillanpää was Finland’s first female minister – and the only one until the next female appointment 21 years later.

During her ministerial term, Sillanpää became familiar with social conditions in the provinces and was involved in promoting the new Marriage Act to improve the legal status of wives and in drafting the Health Insurance Act. A law governing women’s eligibility for public offices was also enacted during her term.

Sillanpää served on the Helsinki City Council for a long period of time, most notably as Chair of the Council’s Child Welfare and Home Economics Committees. She was also active in a wide range of civil society organisations throughout her career. After retiring, Sillanpää focused on promoting mother and child homes and shelters primarily intended for helping unmarried mothers and their children.

“By saving the mother, you save the child. Every child must be saved for life.” (Miina Sillanpää, expressing the mission statement of “Ensikodit”, (“Mother-and-child homes”), a Finnish charity organisation that helps mothers with babies. In 1907, Sillanpää, together with the first female members of the Finnish Parliament, introduced a motion in Parliament that later led to the establishment of mother-and-child homes.)