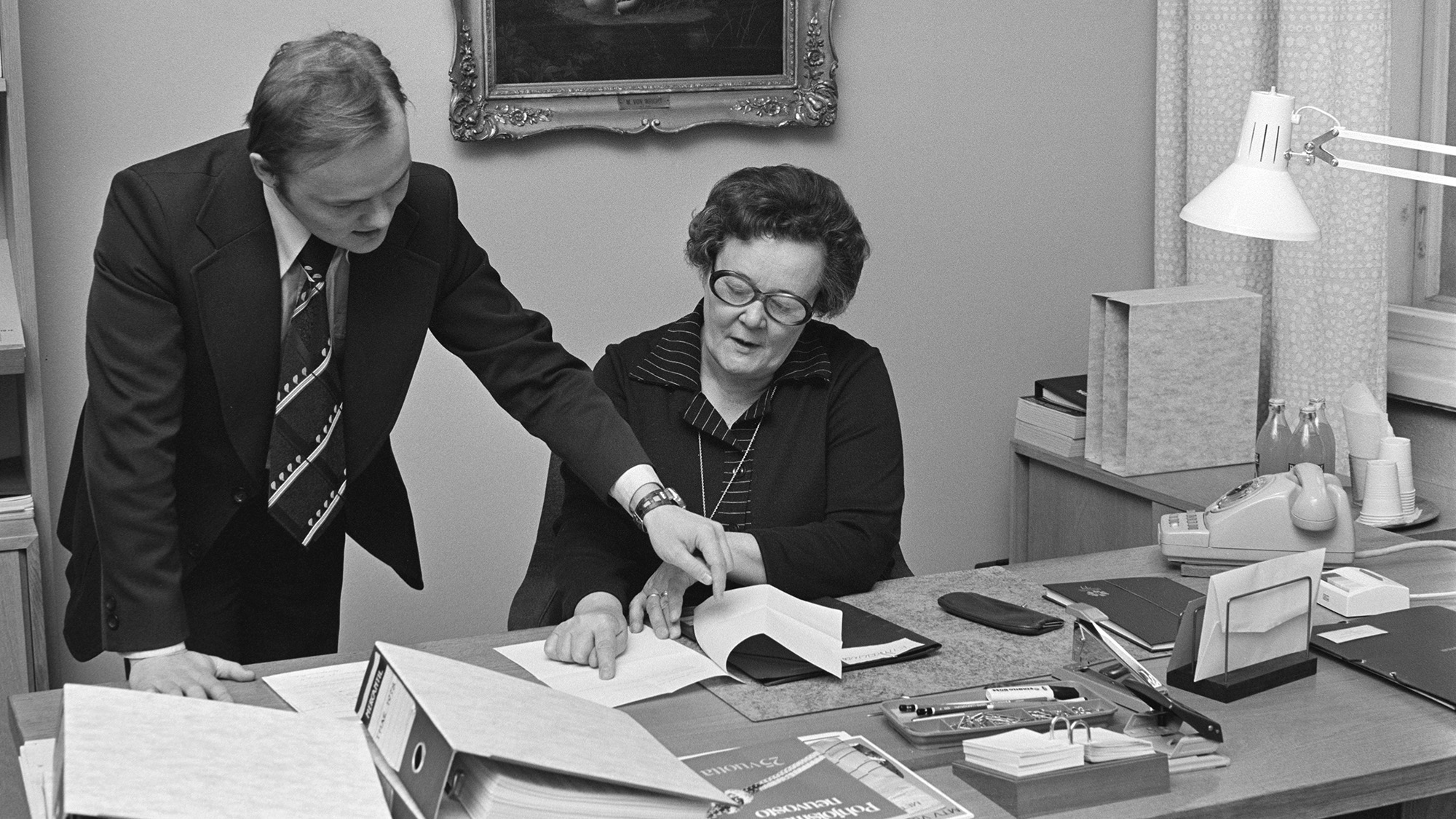 “In order for collaboration to be successful, decision making must, in my opinion, take account of the others.– – Whatever the decade we are living in is, one thing is paramount: you must serve and respect people.”

Minister of Social Affairs and Health Orvokki Kangas and her Political Secretary Markku Kauppinen on 1 April 1977. Leif Weckström/Pressfoto Zeeland/JOKA archive/National Board of Antiquities

An influential figure in the Centre Party and its predecessor, the Agrarian Party, Ilmi Orvokki Kangas was the first female Member of Parliament and Minister from South Ostrobothnia. After her political career, Kangas wrote six books.

Growing up in an Evangelical community of Agrarian Party supporters, Kangas had to give up her studies after primary school and one course at the Finnish Youth Institute. She worked in several positions in Ostrobothnian youth associations and, during the Second World War, as Public Education Secretary for the Province of Vaasa in Suomen Huolto (Central Committee for the Organisation of Assistance to the Population of Finland). In 1950, she left her position as Travel Secretary of the Agrarian Party Women’s Organisation, when she got married and took up the duties of a farmer’s wife. From 1956, however, the mother of five was involved in Lapua’s local politics and held several local positions of trust.

Kangas was elected as presidential elector for four elections, starting from 1968. Through this position, the Parliament doors opened for her in the 1970 election and she became Vice Chair of her parliamentary group on two occasions. She also served as Vice Chair of Finnish Centre Women and chaired the party’s South Ostrobothnian District Organisation from the 1960s through the 1980s.

Social issues, agriculture, culture and religion were important to Kangas both in politics and in her work within civil society organisations. She was appointed as Second Minister of Social Affairs and Health to Prime Minister Martti Miettunen’s Third Cabinet. During the minority government’s term of less than a year, she contributed to launching a home assistance trial and passing a law on war veterans’ pensions, among other things. A temperance movement enthusiast from a young age, Kangas also proposed stricter restrictions on the sale and service of beer, but did not get support from the ministerial group of her party.

Kangas’s career in Parliament came to an end in the 1983 election due to a diminished number of votes. An underlying reason behind her waning popularity may have been the fact that she endorsed Ahti Karjalainen in the battle for the party’s nomination for presidential candidate, whereas the South Ostrobothnian District Organisation and the Women’s Organisation supported Johannes Virolainen.

Resignation from her other political duties and succession arrangements in her home farm meant that she had time to take up writing. Between 1984 and 2000, Orvokki Kangas published six works: a novel, memoirs, histories and spiritual texts. In 1987, she was awarded the Finnish honorary title of ‘kunnallisneuvos’.

“The key to successful cooperation is, in my view, the fact that you must learn to also take other people into account in decision-making. […] Regardless of the decade that you are living in, there is one way above the others: you must serve people, respect them.” (Ylitalo, Teppo: “Orvokki Kangas (1921–2000).” HELEMI database of the local history of Lapua.)