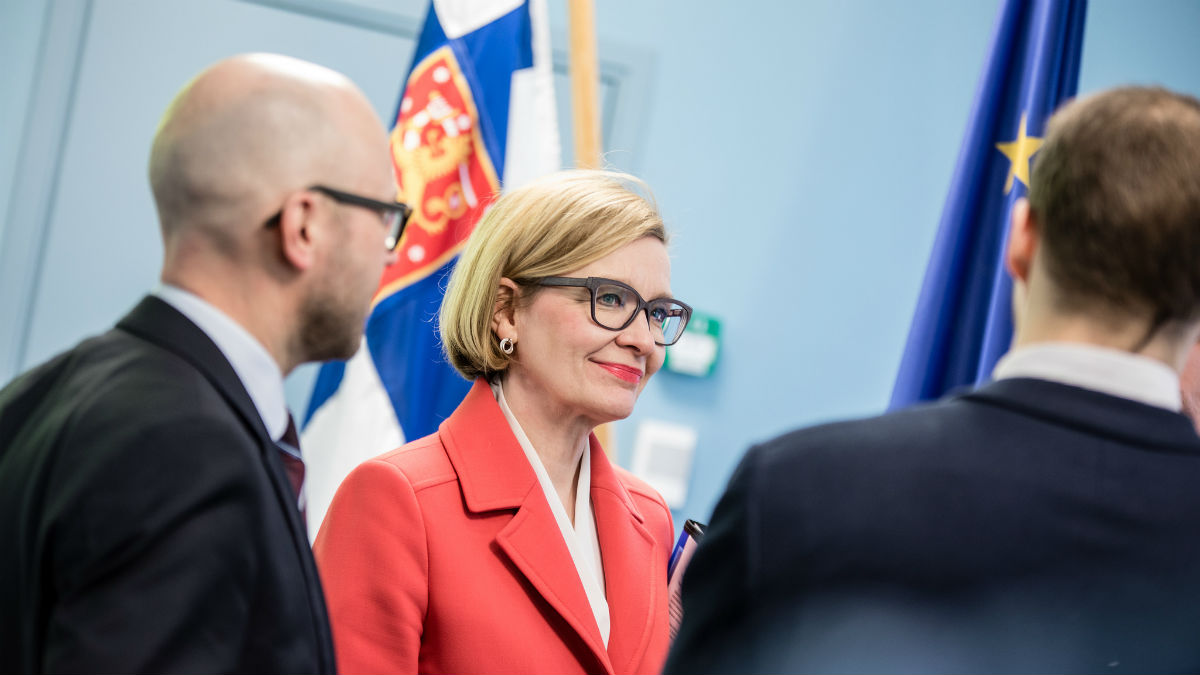 “I have this courage of someone who grew up in an entrepreneurial family, so that when a door opens, you dare to enter."

Paula Sinikka Risikko has served in five Cabinets and held four different ministerial portfolios. Risikko was elected the Speaker of Parliament in 2018.

Originally from Ylihärmä, Paula Risikko is a specialised registered nurse, nursing teacher and Doctor of Health Sciences, who worked in nursing and administrative duties for 20 years from 1983 to 2003. When she was first elected to Parliament in 2003, she took a leave of absence from her position as President of Seinäjoki University of Applied Sciences. She became interested in politics when she saw the effects that decisions have on the health and social services sector while writing her doctoral thesis. She has served on several parliamentary committees, the longest stretches being on the Social Affairs and Health Committee and the Employment and Equality Committee.

Risikko started her substantial ministerial career as Minister of Social Services and Second Minister of the Environment in Prime Minister Matti Vanhanen’s Second Cabinet, which was the first to include more female than male ministers (12 to 8). Risikko also continued as Minister of Social Services in Prime Minister Mari Kiviniemi’s Cabinet. Among other things, Risikko initiated new legislation governing health and social services for the elderly and drafted a new Health Care Act. In addition, she proposed combining health care and social services into regional units throughout the country. Her term also coincided with the swine flu pandemic with its vaccination problems and the Kauhajoki school shooting incident.

In Prime Minister Jyrki Katainen’s Cabinet, Risikko became Minister of Social Affairs and Health. Among other things, she proposed an overhaul of the social security system and finalised a legislative amendment governing authorised pension providers.

In the summer of 2014, Risikko lost her party’s leadership contest to Alexander Stubb. In his Cabinet, she was entrusted with the portfolio of the Minister of Transport and Local Government. During the short government term, key issues on the agenda included the reform in local government structures, road projects and the Helsinki City Rail Loop. Risikko briefly resumed her MP’s seat, serving as Second Deputy Speaker of Parliament from 2015 to 2016. In the ministerial reshuffle following the change of leadership in her National Coalition Party, she was invited to join Prime Minister Juha Sipilä’s Cabinet as Minister of the Interior. During her current term, key talking points have included the health and social services reform, intelligence legislation and the situation of asylum seekers.

After her long career as a minister, Risikko was elected the Speaker of Parliament in 2018. Her appointment was preceded by a change in the power relationships between parties after Blue Reform had split from the Finns Party.

Risikko served as her party’s Deputy President from 2004 to 2008 and chaired the Women’s League of the National Coalition Party from 2004 to 2007. In her hometown of Seinäjoki, she was first elected to the City Council in 2001 and served as one of the Deputy Chairs from 2001 to 2007.

Risikko has held a substantial number of positions of trust, especially in organisations relating to the health care sector, such as a regional association for informal carers (Lakeuden omaishoitajat ry), the Finnish Diabetes Association and the Finnish MS Society. Risikko has published several articles in various professional publications. Her doctoral thesis dealt with the current and future professional requirements of registered nurses.

“I have this courage of someone who grew up in an entrepreneurial family, so that when a door opens, you dare to enter. If I started to dread situations that might come up, I wouldn’t have time for anything else.” (Kotiliesi magazine, 11 December 2016.)