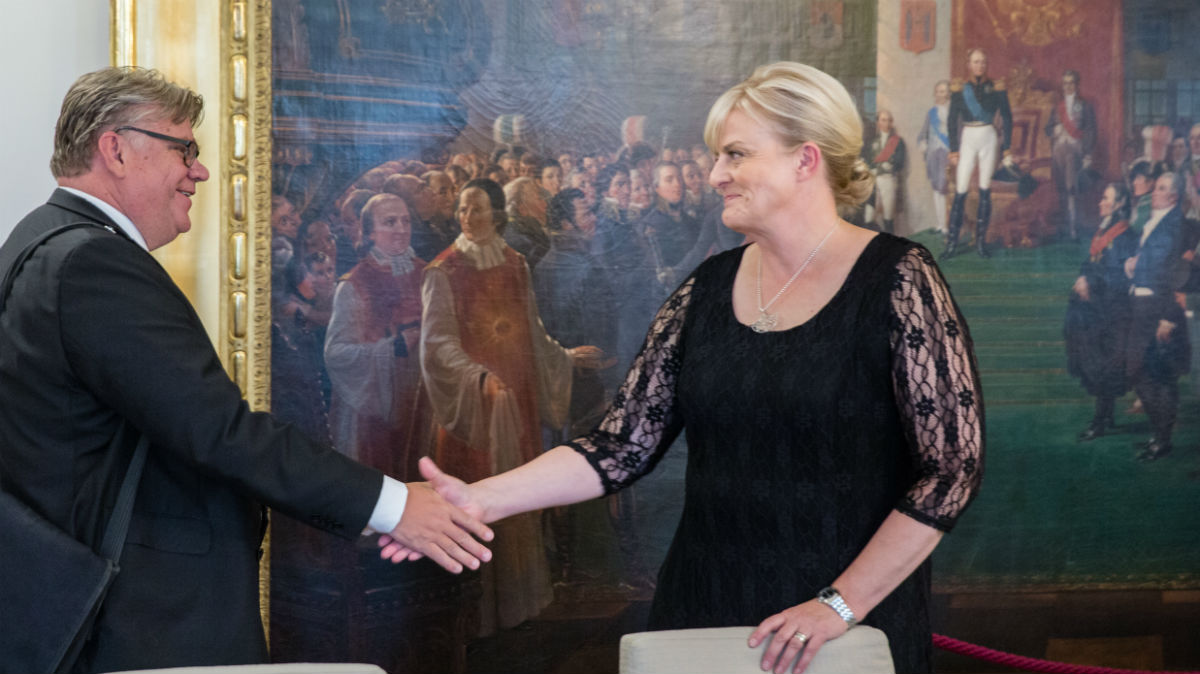 “Everything tends to work out. Jobs will get done one at a time, and you cannot do too many things all at once. You cannot live too much in the past or even in the future, you should live in the here and now.”

Pirkko Mattila was appointed Minister of Social Affairs and Health in the middle of the government’s term on 25 August 2016. Timo Soini, Minister for Foreign Affairs, is congratulating Minister Mattila. Laura Kotila/Prime Minister's Office

Pirkko Anneli Mattila, who came to the government from the ranks of the Finns Party, was appointed a minister during her second term in the Parliament. Together with the other ministers in her party, she left the Finns Party in June 2017 and continued in her ministerial office.

Mattila worked as a nurse anaesthetist in Northern Ostrobothnia Hospital District in 1988–2007 and as an instructor at Oulu Adult Education Centre in 2007–2011. In 2005, she completed her Master of Science degree at the University of Oulu in cultural geography. In 2010, Mattila travelled to earthquake-shattered Haiti as an aid worker for the Red Cross, where she worked as a nurse in a German/Finnish field hospital for a month.

Mattila joined the Finns Party in 2004. Previously, she had been elected to Muhos local council as an independent candidate in her first local election. What held particular attraction for her was the party's Euroscepticism and wish to oppose legislation on national forest policy among other things. Mattila served as the vice chair of the Finns Party's Oulu district and a member of the party’s board.

Mattila was elected to the Parliament in 2011. During her very first term, she replaced Jussi Halla-aho, who had been sentenced to a fine, as the chair of the Administration Committee. Her work in the Agriculture and Forestry Committee is also close to Mattila’s heart. Additionally, she is a member of the Committee for the Future and the Finnish Delegation to the Council of Europe. Mattila served as vice chair in the Executive Board of the Finnish Group of the Inter-Parliamentary Union (IPU) in 2015–2016. She ran for the election to the European Parliament in 2009 and 2013.

In August 2016, she was appointed Minister of Social Affairs and Health in Prime Minister Sipilä’s government. The post became available as Hanna Mäntylä stepped down for family reasons. Mattila’s key tasks during her ministerial term have included promoting the reform of social and health services and regional government.

Mattila has been writing a blog on the websites of both Uusi Suomi and Kaleva. As her hobbies she lists orienteering, genealogy, smoke saunas and goat farming. Mattila is also well versed in sign language, as her mother was deaf from birth.

“Everything tends to work out. Jobs will get done one at a time, and you cannot do too many things all at once. You cannot live too much in the past or even in the future, you should live in the here and now.” (Pirkko Mattila in an interview by the Prime Minister’s Office, 12 April 2017)

“I think I am quite a straightforward person, an ordinary Finn. I have been in local politics for a long time, and I am the mother of a family. I have been a stay-at-home mother, a working mother and a student mother. --- I am a product of the Nordic welfare model at its best. Perhaps my life also reflects those things that should be defended: I represent regional equality, I have had access to education, I have received children's allowances, I have enjoyed free health care and free education.” (Palojärvi, Eeva: ”New minister Mattila: ’I am a product of the Nordic welfare society at its best.’” Hs.fi, 16 August 2016)

The election watch of the True Finns’ party in a broadcast on the municipal election aired by YLE on 26 October 2008. Pirkko Mattila, Vice Chair, is being interviewed at time stamp 00:47-1:09.