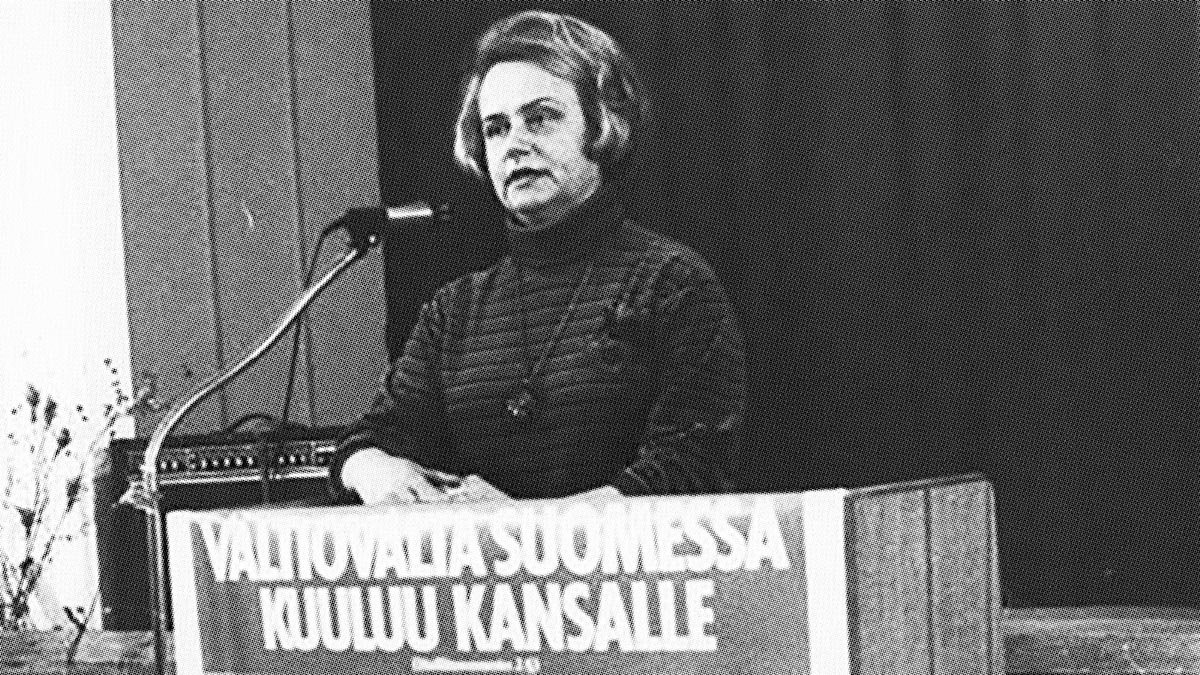 "Learn about things from the grass roots level up to the international level. Do not do this alone. Gather a group of helpers that comprises specialists in every area."

Pirkko Annikki Työläjärvi was the first woman to act as the Deputy Minister of Finance and as the Minister of Trade and Industry. President Kekkonen had planned to see Työläjärvi become the first female prime minister.

Pirkko Työläjärvi was raised in Helsinki by her mother, who was a widow. As a Finnish war child in Sweden, she learned the Swedish language and graduated from a Swedish language upper secondary school in 1957. Työläjärvi continued her studies while working and graduated with a Bachelor’s degree in Economics and then a Master's degree in Economics and Business Administration from Åbo Akademi University. She worked as an office clerk and correspondent at numerous companies, then as a non-tenured teacher, a substitute for a controller, and an office manager at a tax office.

Työläjärvi's political activism began in the Rauma Social Democrats' women's association. She was elected the association's chairperson in 1972. She was first voted into Parliament in 1972. Työläjärvi, who was not initially well-known, shot to her party's front line. She was a member of the Finance Committee and the Finnish banking delegates. In 1975, Työläjärvi was elected deputy party leader and became a Minister of Parliament for the first time.

Kekkonen planned to see Työläjärvi become the first female prime minister, but this did not come to be (see separate video interview). After holding ministerial positions, Työläjärvi acted as chairperson of the Foreign Affairs Committee and as Deputy Speaker of the Parliament, until she took on the position of governor of the Province of Turku and Pori. She stood as a presidential candidate in her party's primaries in 1994, but received few votes. After the provincial reform, Työläjärvi worked as a project manager at the Finnish Innovation Fund Sitra. She retired in 1998.

Työläjärvi acted as chairperson of the Consumers’ Union of Finland from 1975 to 1985, as well as the chairperson for the Finland National Committee for UNIFEM (now UN Women) from 1988 to 1990. She also held numerous positions of trust e.g. in the Finnish-Swedish Society, the Finnish Peace Committee and Finnair. In 1990, she was awarded an honorary Doctorate by the Turku School of Economics.

"Learn about things from the grass roots level up to the international level. Do not do this alone. Gather a group of helpers that comprises specialists in every area. (Pirkko Työläjärvi's advice to young politicians, interview by the Prime Minister's Office 5 June 2017)

"I may be one of those people whose ideological viewpoint is not completely clear. This is due to my nature and my understanding of people. I am not very theoretical and feel that politics is the management of people's matters, politics is the art of the possible." Lehtinen, Lasse: Työläjärvi – tasavallan tahtonainen. WSOY, 1982, p. 98)