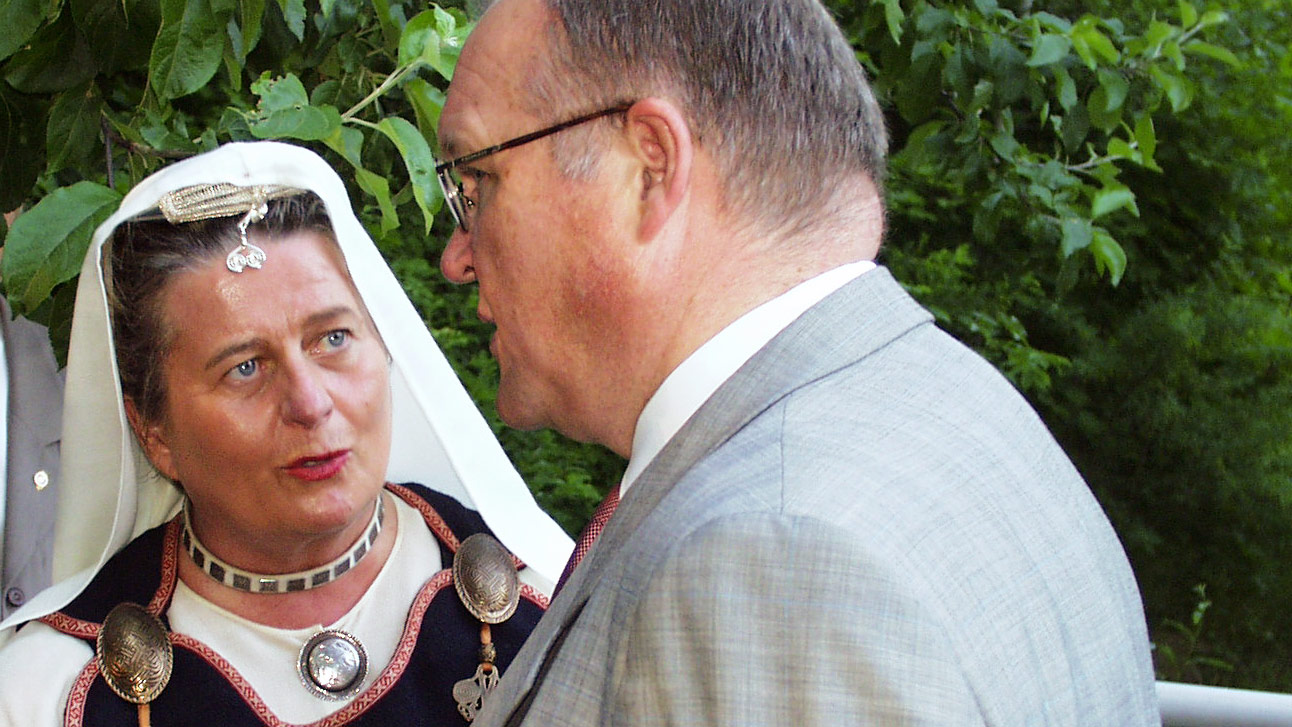 "Anything but a slumbering, half-dead life.”

Riitta Maria Uosukainen was the first woman to act as the Speaker of the Parliament.

Riitta Uosukainen was born into a Karelian family which had been relocated due to the war. She grew up in Imatra, but moved to Helsinki where she studied Finnish linguistics and literature at the University of Helsinki and worked as a clerk for Tammi Publishers. After graduating with a Licentiate of Arts in 1970, she worked as a teacher and lecturer of Finnish in Imatra and took part in drafting numerous school books.

Her political career also began in Imatra, where she was elected to the city council in 1977. Uosukainen was voted into Parliament in 1983. She is a talented speaker and performer, and was thus very popular among voters. In Parliament, Uosukainen was a member of the Defence Committee and the Education and Culture Committee; she was also chairperson of the latter. She was appointed Minister of Education in Aho's cabinet. At that time, Finland was in the depths of an extensive recession. Numerous large cuts were made to education, which Uosukainen opposed.

During her term as the Speaker of the Parliament, Finland went through a period a great changes as it became a member of the European Union and Finland's Constitution went through a reform. She led numerous reforms in Parliament, such as the building of new facilities. She also limited the length of parliamentary sessions. Uosukainen gained international experience as the chair for the Finnish delegation to the OSCE's Parliamentary Assembly. In 2000, she was nominated the National Coalition Party's presidential candidate after Sauli Niinistö declined standing as candidate. Uosukainen came third in the first round, and thus Esko Aho and Tarja Halonen went on to the second round.

During her career and after her retirement, Uosukainen has held numerous positions of trust particularly in organisations in the culture and national defence sectors. In 2002, she became the first woman to be awarded the Grand Cross of the White Rose of Finland and in 2004 the honorary title of Counselor of State.

Uosukainen has been married since 1968 to Lieutenant Colonel Toivo "Topi" Uosukainen, who has been visibly supportive of his wife's public career.

”Anything but a slumbering, half-dead life” (Riitta Uosukainen, interview by the Prime Minister's Office 19 May 2017)

"When I became Speaker of Parliament, newspapers often stated that 'the Speaker actually did a good job'. People also began to think back on whether there had been Speakers of Parliament in the past. In other words, when a woman became Speaker the position gained visibility. The Parliament gained a face. Gender is a great benefit to Parliament." (Lipponen, Päivi (Ed.): Akat aidan tekee, miehet käyvät mittaamassa. Kirjapaja, 2006, p. 117)

Riitta Uosukainen, Speaker of Parliament was one of the guests invited to a YLE programme called “A-studio” after the EU referendum on 16 October 1994. Uosukainen is talking for the first time at time stamp 00:44.