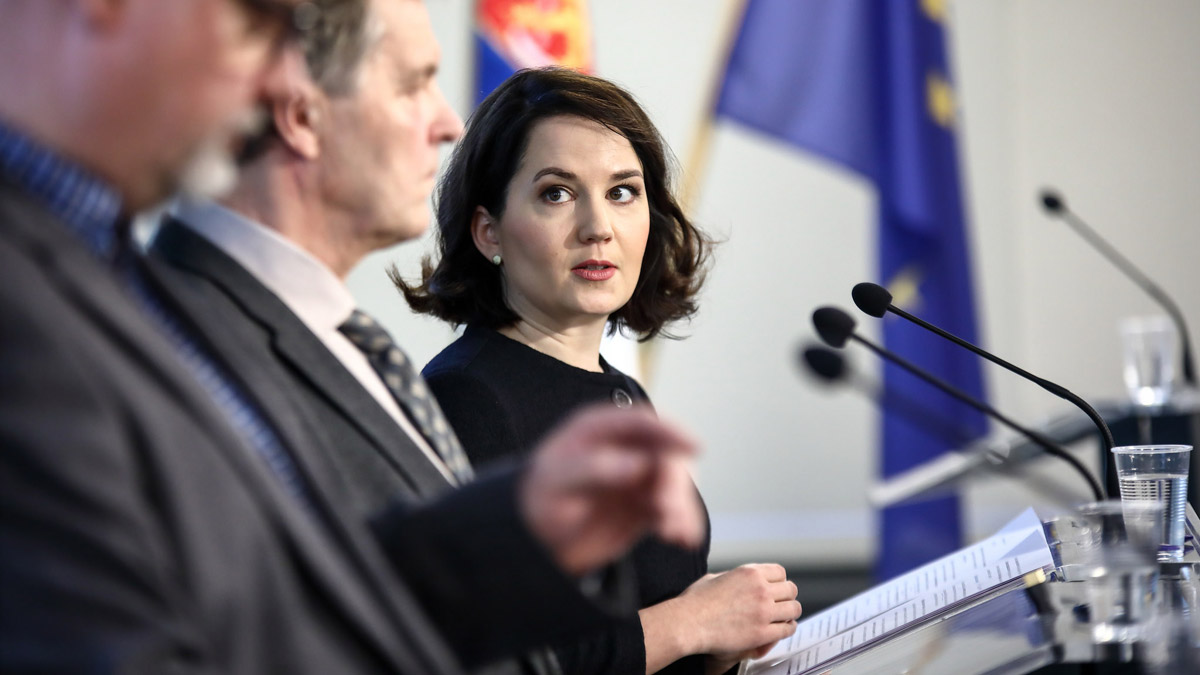 “People generally expect young female politicians to be kind of angry. That I am not. Nor am I the kind of person who tells good stories in company. I’m fairly matter-of-fact and aim to do things well.”

Minister of Education and Culture Sanni Grahn-Laasonen at the event where Finland's PISA results were published on 6 December 2016. Lauri Heikkinen/Prime Minister’s Office

Sanni Kaisa Grahn-Laasonen became a Minister during her first term as a Member of Parliament.

Grahn-Laasonen, who is from Forssa, got involved in politics through the Union of Upper Secondary School Students in Finland. She studied social policy at the University of Helsinki, graduating as Master of Social Sciences in 2011. While studying, she worked as a reporter, Stockholm correspondent and news editor for the Iltalehti evening paper. She went on to work as Press Attaché to Foreign Minister Alexander Stubb and was elected to Parliament at her first attempt in 2011.

In Parliament, Grahn-Laasonen sat on the Social Affairs and Health Committee and the Employment and Equality Committee. She was also a Parliamentary Trustee of the Social Insurance Institution of Finland from 2011 to 2014. At the beginning of her career as an MP, Grahn-Laasonen and her party colleague Lasse Männistö made a splash by preparing a list of so-called unnecessary laws, introducing the concept of a ‘deregulation drive’ into public debate.

Towards the end of her first term, Grahn-Laasonen became Minister of the Environment when the Greens left Prime Minister Stubb’s government coalition. During her ministerial term of less than a year, key issues on the agenda included the Mire Conservation Programme, the wastewater management reform and the Lima Climate Change Conference.  The new Climate Change Act was finalised during her term.

In Prime Minister Juha Sipilä’s Governent, Grahn-Laasonen first served as Minister of Education and Culture, and from mid-government term (as of April 2017) as Minister of Education. During her earlier portfolio, which included culture, youth and sport affairs, she introduced a reform of the system of central government transfers for the arts, established an incentive system for audiovisual production and made amendments to the Library Act and the Youth Act.

As Minister of Education, the main themes on her agenda consist of the controversial cuts in education and training as well as structural reforms. Grahn-Laasonen has revamped the entire educational system from early childhood education to higher education institutions. She also launched a campaign against hate speech and racism and has lead Government cooperation efforts to improve the position of young people who are not in education, employment or training.

Grahn-Laasonen was elected Deputy President of the National Coalition Party in 2014, renewing her mandate at the 2016 Party Conference. She is a City Councillor of her hometown of Forssa and served as Deputy Chair of the City Council from 2012 to 2014. Grahn-Laasonen has held various positions of trust, including Chair of the Regional Council of Häme and Vice-Chair of the Development Policy Committee.

Grahn-Laasonen’s interests include sports, as well as playing the drums, accordion and violin, and singing.

“People generally expect young female politicians to be kind of angry.    That I am not. Nor am I the kind of person who tells good stories in company. I’m fairly matter-of-fact and aim to do things well.” (Vahvanen, Pekka & Kilpiö, Sami:  ”Ei mikään politiikan vihainen nainen.” [‘No angry young woman of politics’.] Website of the Helsingin Sanomat newspaper at hs.fi, 19 June 2014.)

“I’m not bothered by criticism; it’s part of this job. Sometimes I’d like to remind people that many male politicians have become ministers at a younger age than I have, such as Paavo Väyrynen and Ulf Sundqvist.    Was age a topic of conversation in their cases?” (Salmi, Susanne: ”Ministeri Sanni Grahn-Laasonen:  ’Piilottelin Nykypäivä-lehteä vanhemmiltani”. [‘Minister Sanni Grahn-Laasonen: “I hid issues of the Coalition Party newspaper from my parents”’.]  Kotiliesi magazine 18/15.)