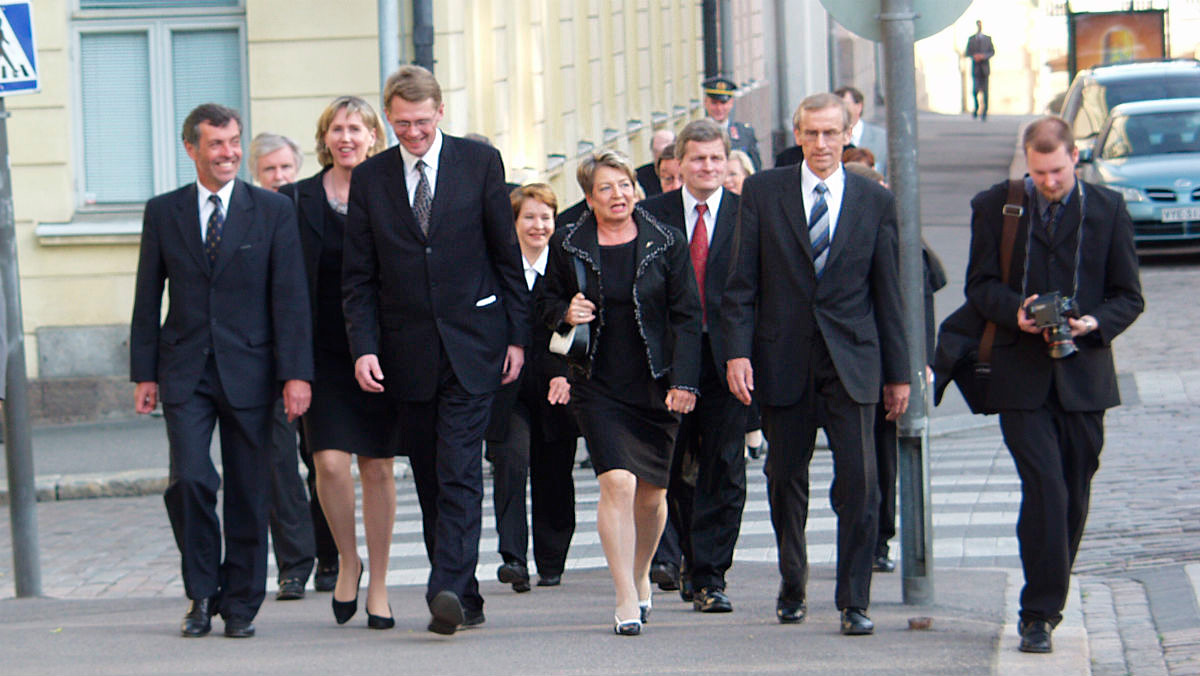 “Of course, I am happy that people had so much confidence in me that I was a member of the Government for 3,817 days. They were busy and memorable years. But I’m sure one of the current female ministers will soon break this record.”

Ministers of Vanhanen’s Government on their way to the House of the Estates on 24 June 2003. Sinikka Mönkäre (in the middle), and next to her Jan-Erik Enestam (on the left), Tuula Haatainen, Matti Vanhanen, Tarja Filatov, Johannes Koskinen and Antti Kalliomäki. Prime Minister's Office

Sinikka Mönkäre grew up in her aunt’s family in the social democratic community of Vuoksenniska and joined the party at the age of 15. She graduated as a doctor and worked in several localities before settling in Imatra. Mönkäre defended her dissertation and was awarded the degree of Doctor of Medicine and Surgery from the University of Helsinki in 1984. She started her political activity in the city council of Imatra where she served from 1980 to 1995 (and in 2005), also chairing the council twice.

Mönkäre was not re-elected to Parliament after her first term in 1991 and returned to her post as a deputy chief physician in Imatra. Seeing the impact of recession in her patients’ life encouraged her to stand for Parliament again in 1995. Slightly unexpectedly, Paavo Lipponen appointed the newly elected Mönkäre as Minister of Social Affairs and Health in his first Government. Mönkäre proved her competence. She served in various ministerial positions uninterruptedly for more than ten years, longer than any other female politician.

Mönkäre found the post of Minister of Trade and Industry the most challenging one. During her term, she had to deal with difficult situations related to the state ownership policy and disputes over nuclear power.

Mönkäre’s career as a minister was interrupted in 2005 as a result of a ministerial reshuffle after the change of the chairperson of the Social Democratic Party. Mönkäre then returned to her position as a member of Parliament. In 2006, she became CEO of the Finnish Slot Machine Association and served in this position until her retirement in 2012. In the same year Mönkäre started to use her husband’s surname Laisaari.

Mönkäre’s governmental positions of trust include chair of Consumer Council (Kuluttajaneuvosto) 1988–1990 and member of the Advisory Council on Consumer Affairs 1990–1995. She was the chair of the Board of the Regional Council of South Karelia in 2005. Mönkäre’s biography Orpotytöstä ministeriksi – Sinikka Mönkäreen tarina (Art House) was published at the beginning of 2017. It was written by her son-in-law, nonfiction writer Patrik Pehkonen.

“Things tend to work out. When I have faced difficult or regrettable challenges I have always thought that when you start working on the matter, it will always work out somehow.” (Interview by the Prime Minister’s Office on 20 April)

“Of course, I am happy that people had so much confidence in me that I was a member of the Government for 3,817 days. They were busy and memorable years. But I’m sure one of the current female ministers will soon break this record.” (Manskinen, Harri: “Sinikka Mönkäre retires and becomes Sinikka Laisaari.” Uutisvuoksi.fi, 31 March 2012)

“Of course, you can constantly be on a collision course with the others, but it is not the way to achieve results. You may get momentary publicity in today’s media world, but not the kind of trust among your colleagues that is needed to really move matters forward.” (Tiilikainen, Tenho: “Sinikka Mönkäre has made her story come true.“ Etelä-Saimaa, 22 February 2004)