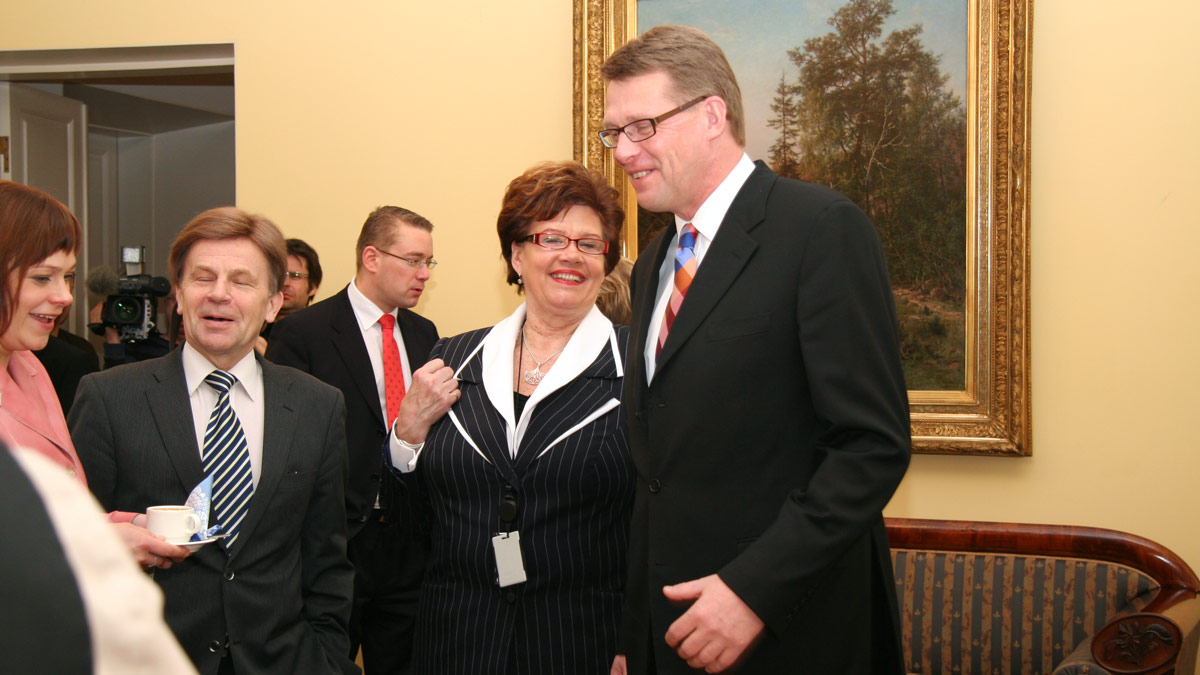 “Don’t do to others what you wouldn’t want others to do to you. This is my guiding principle and outlook and it has carried me a long way.”

Sirkka-Liisa Anttila is the longest-serving female Member of Parliament in Finland.

A farmer’s daughter from Marttila, Sirkka-Liisa Anttila obtained a University Diploma in Public Administration from the University of Tampere in 1967 and went on to work in several administrative positions, including as an office secretary and a financial manager. Anttila was elected to the Forssa Town Council in 1977 and as Chair of the Centre Party’s South Häme District in 1981. Two years later, with support from women’s organisations in particular, her path led to Parliament.

Agricultural, consumer and equality issues have been especially important to Anttila. In the course of her long career in Parliament, she has served on the Parliamentary Constitutional Law and Foreign Affairs Committees and the Grand Committee, among other duties. A key focus of her work has been on the Agriculture and Forestry Committee, which she has chaired on two occasions, from 1991 to 1995 and from 2003 to 2006.

In 1994, Anttila was elected both as Chair of Finnish Centre Women and as the entire party’s Vice Chair. The following year, she became First Deputy Speaker of Parliament. At the time, Parliament was led by a historic troika of women, with the National Coalition Party’s Riitta Uosukainen as Speaker and the Social Democratic Party’s Kerttu Törnqvist as Second Deputy Speaker.

In 1996, Anttila launched a successful bid for the European Parliament, where she also served on the Committee on Agriculture and Rural Development. Her term only lasted two and half years. After returning to Finland and the Finnish Parliament, Anttila resumed her position as Deputy Speaker from 1999 to 2003 and again from 2006 to 2007.

Anttila became the first woman to serve as Minister of Agriculture and Forestry, holding the position in both Prime Minister Matti Vanhanen’s Second Government and Mari Kiviniemi’s Government from 2007 to 2011. Key issues during her ministerial term included negotiations on Finland’s agricultural subsidies with the European Commission.

After her ministerial term, Anttila returned to her MP’s seat, which she renewed in the 2015 election. In late 2016, Anttila overtook Miina Sillanpää in the number of parliamentary sessions, becoming the longest-serving female parliamentarian in Finland.

Anttila’s numerous positions of trust reflect her political interests: she served on the Finnish Consumer Council from 1979 to 1990 and on the National Board of Economic Defence from 1993 to 2001. Anttila has also worked on equality issues, chairing the Council for Gender Equality from 2003 to 2007, the Coalition of Finnish Women’s Associations (NYTKIS) from 1999 to 2003 and the National Council of Women of Finland from 2007 to 2015.

“My motto has always been: ‘Don’t do to others what you wouldn’t want others to do to you.’ This is my guiding principle and outlook and it has carried me a long way.” (Sirkka-Liisa Anttila’s website)

“You need to get along with everyone. You need to tolerate diversity, because it is only through good human relations that you can drive things forward.” (Lammi, Henna: ”Sirkka-Liisa Anttilasta ennätysnainen – ’On tärkeää muistaa, ketä edustaa.’” [‘Sirkka-Liisa Anttila breaks women’s record – “It’s important to remember who you represent”.’] Website of the Suomenmaa newspaper at suomenmaa.fi, 25 December 2016.)

Minister of Agriculture and Forestry Sirkka-Liisa Anttila takes part in discussion on conservation of the Saimaa ringed seal on YLE's A-talk programme (duration 40 min) on 28 May 2009). Anttila speaks for the first time at time stamp 1:26.