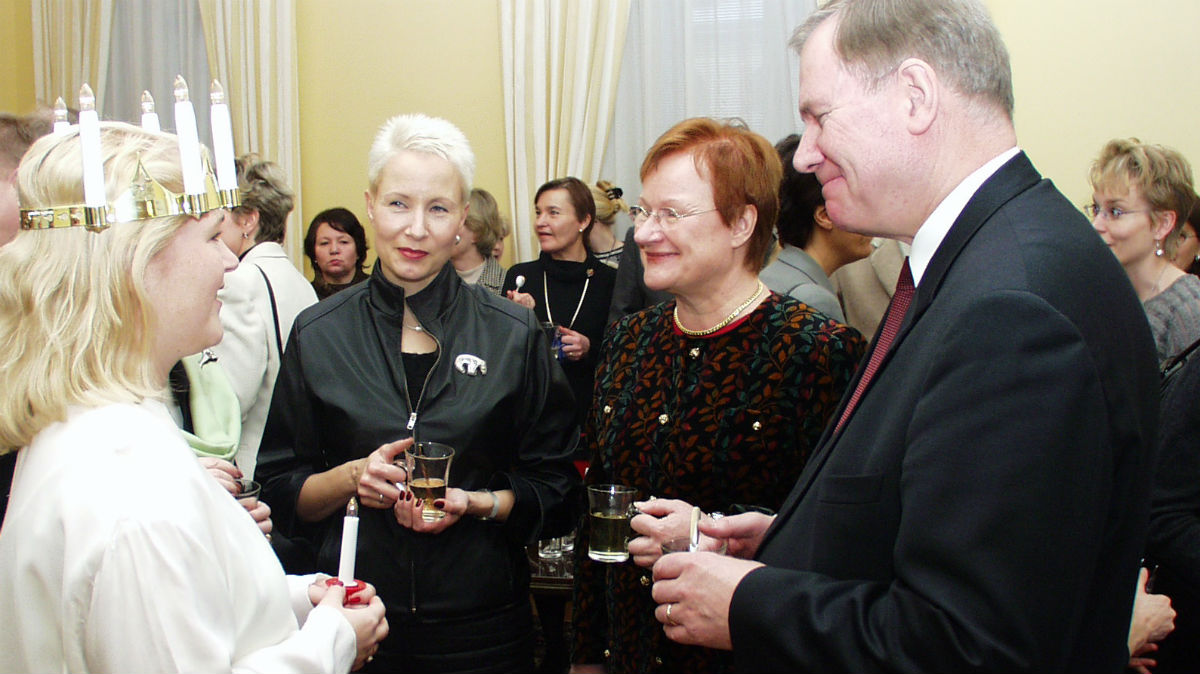 "It is a sign of openness and responsibility when people who act in politics openly explain their own way of thinking and why they are in favour of a certain solution, and why they might sometimes change their minds on some issues. Learning must also be permitted."

Sini Maaria Suvi-Anne Siimes acted as party leader for the Left Alliance for nearly eight years until she resigned from the party and withdrew from politics.

Suvi-Anne Siimes grew up in Helsinki and graduated with a Licentiate in Social Sciences in 1993. Her major was economics.  However, according to her election slogan, she was a "different kind of economist", who spent time with the green movement and began her studies from practical philosophy. She was one of the founding members of University of Helsinki student organisation the Independent Left. Siimes' political career began as a member of the Pohja Municipal Board in 1993. Before she got a seat in parliament, she had been appointed to head Vasemmistonaiset (the Left Alliance women's organisation) and the Left Alliance.

Siimes succeeded former party leader Claes Andersson as Minister of Culture in Lipponen's first government. Siimes, who became known as an expert of economics, continued as a Minister of Parliament in Lipponen's second government, in which she held the position of Minister of Finance. Additionally, she held positions at the Ministry of the Environment and the Ministry for Foreign Affairs. After these, Siimes took on actual parliamentary work as a member of the Foreign Affairs Committee, as well as a member of Finland's delegation to the NATO Parliamentary Assembly. After her term in Parliament, she still held a position as a member of the Advisory Council for the Finnish Institute of International Affairs from 2007 to 2011.

The diverging views between Siimes and the party's Taistoists in matters such as foreign policy and national security caused internal conflict. For this reason, Siimes stepped down from her position as party leader in March 2006 when the parliamentary term came to an end. She resigned from the party entirely and began to work for the pharmaceuticals industry as CEO of Pharma Industry Finland.

From 2011, Siimes has been the CEO of the Finnish Pension Alliance TELA. She was also the chair of Veikkaus Board from 2011 to 2016.

Siimes, who has written many columns, has published five works including Politiikan piilokuvat (2002) and Politiikan julkisivu (2007), which shed light on her political career as well as Taivas alkaa maasta (2006), which she co-authored with Orthodox nun Kristoduli.

"It is a sign of openness and responsibility when people who act in politics openly explain their own way of thinking and why they are in favour of a certain solution, and why they might sometimes change their minds on some issues. Learning must also be permitted." (Siimes, Suvi-Anne: Politiikan julkisivu. Otava 2007, p. 220-221)

Suvi-Anne Siimes, Minister of Housing, being interviewed about homelessness on a programme called “Silminnäkijä” (“Eyewitness”) aired by YLE, Finland’s public service broadcaster, on 9 March 2000. Siimes talks at time stamp 03:55 and 25:50.