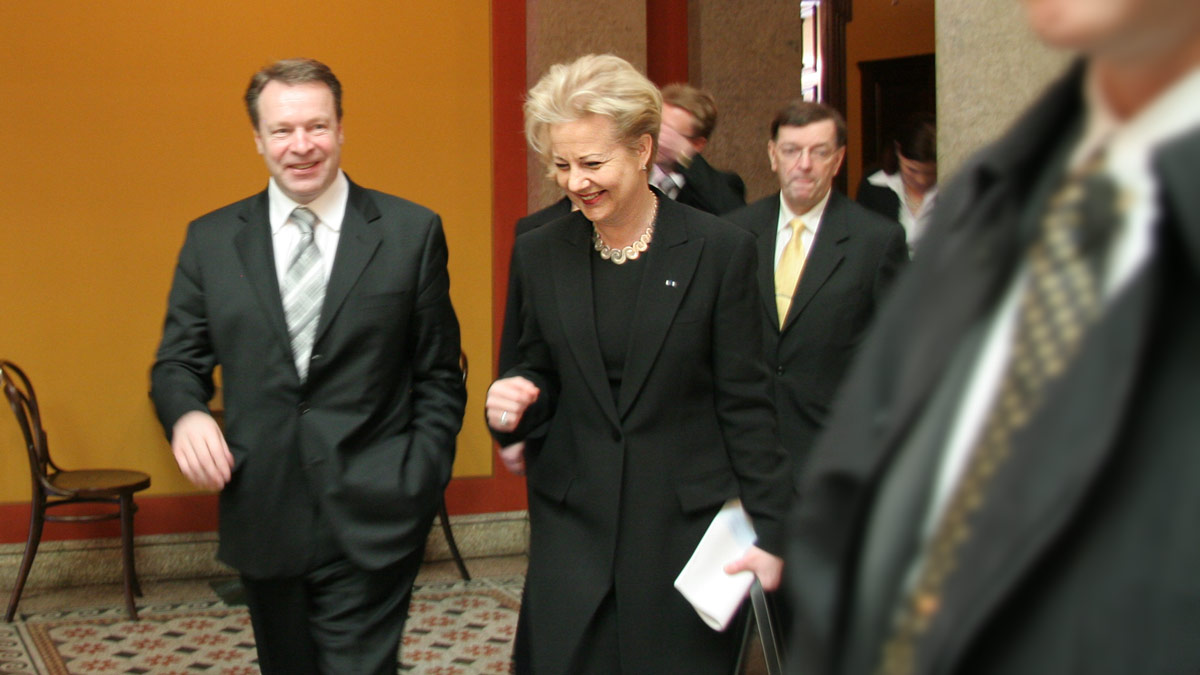 Suvi Lindén and Ilkka Kanerva after the briefing on the appointments to the new Government on 19 April 2007. Prime Minister's Office

Suvi Helmi Tellervo Lindén was the first representative of the National Coalition Party to become Minister of Culture.

Lindén graduated as Master of Arts from the University of Oulu Department of Information Processing Science and went on to work as a computer programmer for the City of Oulu for five years. Active in politics since upper secondary school, Lindén saw her persistent efforts rewarded in 1995, when she started her 16-year career in Parliament. At the beginning of her second term, she became Minister of Culture in Prime Minister Paavo Lipponen’s Second Cabinet as the first National Coalition Party representative in history.

As Minister of Culture, Lindén launched the compilation of the Government’s Arts and Artist Policy Programme, which was to form the basis for several reforms in the early years of the 21st century. Further initiatives started during Lindén’s term included a reform of the Copyright Act and the network of children’s cultural centres known as Taikalamppu (‘Magic Lamp’). In addition, sports issues in particular assumed centre stage, not only due to Lindén’s own interest, but also because of a doping scandal in the 2001 Nordic World Ski Championships in Lahti. In the summer of 2002, Lindén resigned from her ministerial role when it came out that she had recommended government support for a golf course in which she was also a shareholder.

Nevertheless, her term as a Member of Parliament continued and she was later appointed as Minister of Communications to both Prime Minister Matti Vanhanen’s Second Cabinet and Prime Minister Mari Kiviniemi’s Cabinet. Key issues during her terms as Minister of Communications included the transition into digital TV broadcasts, a law guaranteeing broadband connections for every Finn, as well as the Act on the Protection of Privacy in Electronic Communications, dubbed ‘Lex Nokia’, which attracted plenty of publicity. This Act, which was subsequently repealed, allowed companies to monitor the sender information of employees’ e-mail messages, which was considered to infringe their privacy.

In Parliament, Lindén served on the Speaker’s Council and the Transport and Communications, Environment and Foreign Affairs Committees and chaired the Education and Culture Committee on two occasions. Likewise, Lindén was Vice Chair of her parliamentary group on two occasions, in 1999 and from 2003 to 2007. After her failed re-election bid in 2011, Lindén was hired by the International Telecommunication Union (ITU) operating under the auspices of the United Nations. She travelled the world to give lectures on the effects of information and communications technology on economic growth and development.

Lindén has served as European representative of the World Anti-Doping Agency (WADA) and chaired the Finnish Information Society Advisory Board. Lindén was active in Oulu’s local politics for 28 years and chaired the Assembly of the Council of Oulu Region from 1997 to 1999. In addition, she has held numerous positions of trust within her party, including as Chair of the North Ostrobothnia National Coalition Party, member of the Party Executive and Vice Chair of the Women’s League. She has also been involved in several sports organisations, including as Chair of Rinkball Finland and on the Board of the Kärppä-säätiö (‘Kärppä Foundation’).

Lindén has also chaired the Board of NxtVn Finland and she owns a consultancy business, Pearlcon Consulting.

When she was young, Lindén was a keen diver, competing at the Finnish Championships level.

Minister of Communications Suvi Lindén and Mikael Jungner discuss the funding of YLE in the A-studio programme on 15 March 2010.