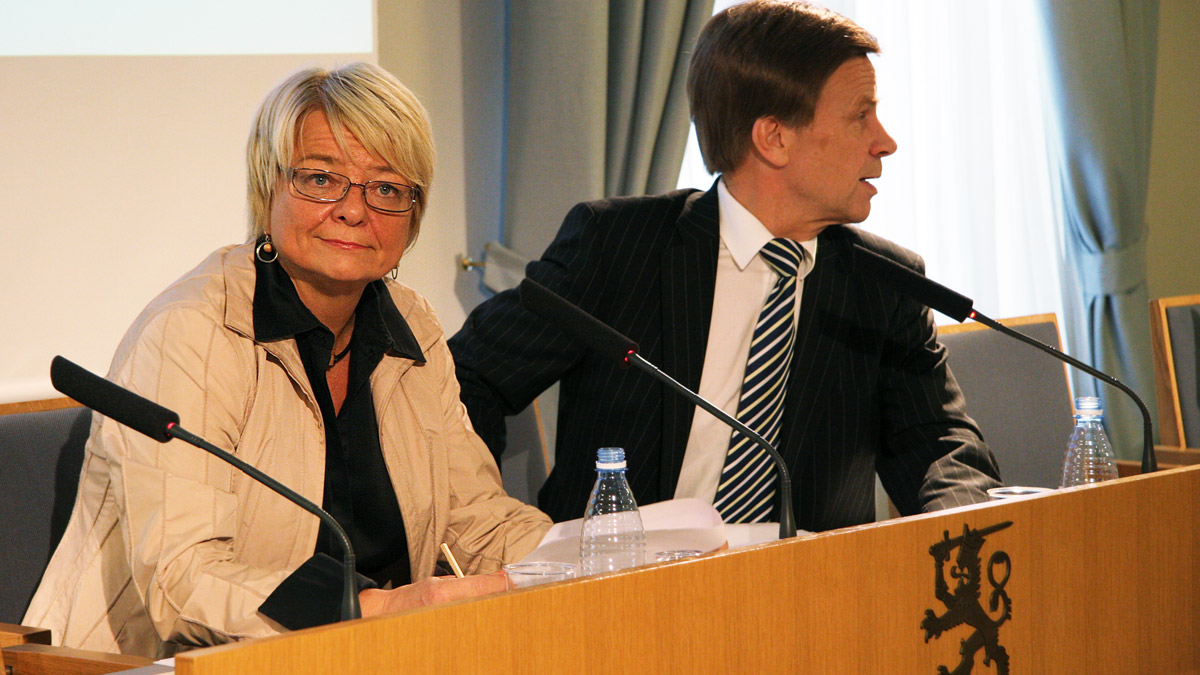 “I see myself as an agent of change. I like to work in places where I have an opportunity to make things better. New perspectives, things that require closer examination and the environment, which I want to understand, are a source of energy to me."

Ministers Tarja Cronberg and Mauri Pekkarinen as the Ministry of Employment and the Economy's press briefing on 20 September 2007. Prime Minister's Office

Tarja Anneli Cronberg did not enter politics until at the age of 60. Within six years, she became the chair of her party and a minister.

Cronberg has lived a large part of her life abroad. She defended her dissertation in technology at Lund University in 1973 and in business administration at the Copenhagen Business School in 1988. She worked as a product development manager in Sweden and in different research positions in Denmark. In Finland, Cronberg headed the Regional Council of North Karelia between 1993 and 2001. The Nordic dimension was visible in her parliamentary work, which began in 2003: she was a member of the Defence Committee and the Finnish Delegation to the Nordic Council.

Cronberg became chair of the Green party of Finland in 2005. As the Minister of Labour in Matti Vanhanen’s Government, she decided among other things on the new business hours act and the social and unemployment security of receivers of grants. Her term as a minister ended in 2009 when she resigned as chair of the party in favour of Anni Sinnemäki. Cronberg had not been re-elected member of Parliament in 2007, and after her ministerial duties she was engaged in drafting expert reports.

She has since then served as chair of the Peace Union of Finland and chair of the board of Syöpäklinikoiden ja syöpätutkimuksen tuki ry, a registered association supporting cancer clinics and cancer research (Cronberg had breast cancer herself). Cronberg’s literary production is extensive and she has served as a specialist at the Stockholm International Peace Research Institute SIPRI.

Cronberg, who is widowed, lives in Polvijärvi in Teerisaari by Lake Höytiäinen where she has been practising organic farming and forestry.

Discussion on YLE's A-talk programme on nuclear power on 26 April 2006 included discussion on the Chernobyl nuclear accident. Green Party leader Cronberg was the first to speak.