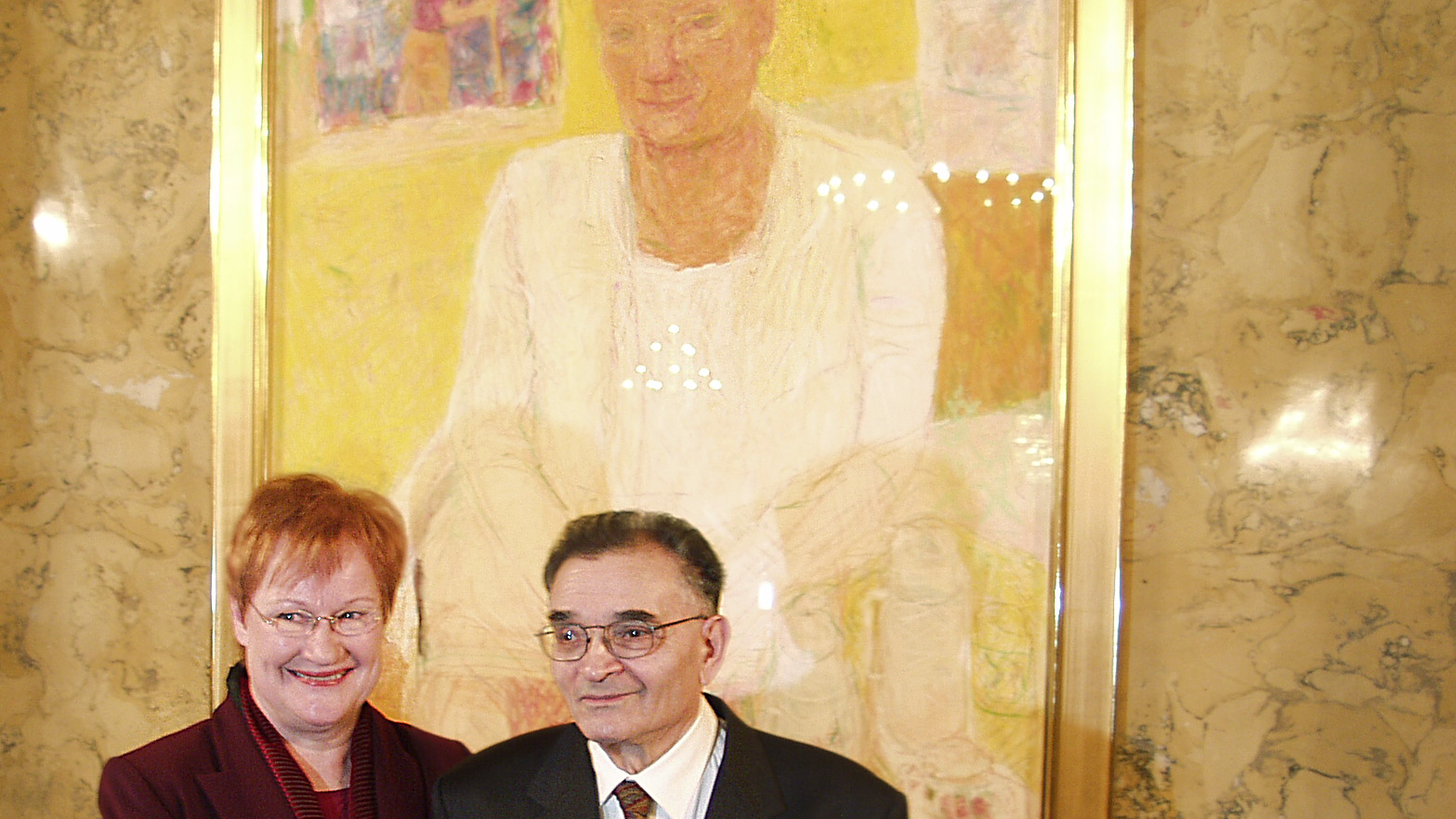 “I don’t imagine myself as being historically important, but I will say that there are great many places where you can make a difference. But you need to do the work yourself. You need to know and believe in what you are doing. You need to put your soul into it.”

Tarja Halonen and artist Rafael Wardi at the unveiling of President Halonen's portrait at the Government Palace on 8 November 2002. Prime Minister’s Office

Tarja Kaarina Halonen was the first female President of Finland and she was also the first woman to become Minister for Foreign Affairs.

A daughter of working-class parents who grew up in the blue-collar district of Kallio in Helsinki, Tarja Halonen was the first member of her family to take the upper secondary school matriculation examination. She graduated as Master of Laws from the University of Helsinki in 1968 and got a job as the first female lawyer of the Central Organisation of Finnish Trade Unions (SAK). Halonen initially became involved in politics in the National Union of University Students in Finland (SYL) and went on to work as Parliamentary Secretary to Prime Minister Kalevi Sorsa in 1974. She served on the Helsinki City Council from 1977 to 1996. She was elected as a Member of Parliament for the Social Democratic Party for the first time in 1979 and, subsequently, for another five consecutive terms.

During her years in Parliament, Halonen served on various parliamentary committees, including the Social Affairs and Legal Affairs Committees. She started her long ministerial career as the Second Minister of Social Affairs and Health in Prime Minister Harri Holkeri’s Cabinet, where she also served as Minister of Nordic Cooperation. In 1990, the position of the Minister of Justice was left vacant as a result of a cabinet reshuffle. Halonen was appointed as the new Minister of Justice, becoming the first woman in this role after Inkeri Anttila, who had served in a non-partisan caretaker government.

Halonen continued to break glass ceilings in Prime Minister Paavo Lipponen’s two Cabinets, serving as Finland’s first female Minister for Foreign Affairs in both. In total, she clocked over 3,200 days as a Cabinet Minister.

In 1999, Halonen stood as the presidential candidate for the Social Democratic Party, leaving her Centre Party rival Esko Aho behind in both rounds of the election. Tarja Halonen was first elected President of the Republic in 2000 and for a new term in 2006, when her main rival was the National Coalition Party’s Sauli Niinistö. The key political themes of Finland’s first female President included human rights, democracy and civil society, as well as social justice and equality.

Presidential prerogatives and constitutional reform were frequently discussed during Halonen’s terms, and she defended the President’s foreign policy and moral leadership role. The foremost international positions of trust held by Halonen include various roles in UN organisations and chairing the Council of Women World Leaders (CWWL) from 2009 to 2014.

After her presidential terms, lasting 12 years in total, Halonen has taught international relations at Harvard University and established the eponymous TH Global Sustainable Development Foundation, among other things. Working in civil society organisations has been important to Halonen throughout her life. She is active in numerous organisations and networks both at home and abroad.

Halonen has one adult child and she has been married to Dr Pentti Arajärvi since 2000.

“The institution of presidency was made for a man. People tried to force me into the outward mould of a First Lady: there was an awful lot of talk about hats, handbags and evening gowns.” (Tarja Halonen in a Prime Minister’s Office interview on 10 April 2017.)

“I don’t imagine myself as being historically important, but I will say that there are great many places where you can make a difference. But you need to do the work yourself. You need to know and believe in what you are doing. You need to put your soul into it.” (Lehtilä, Hannu: Tarja Halonen – paremman maailman puolesta. [‘Tarja Halonen – working for a better world.’] Tammi 2012, p. 240.)