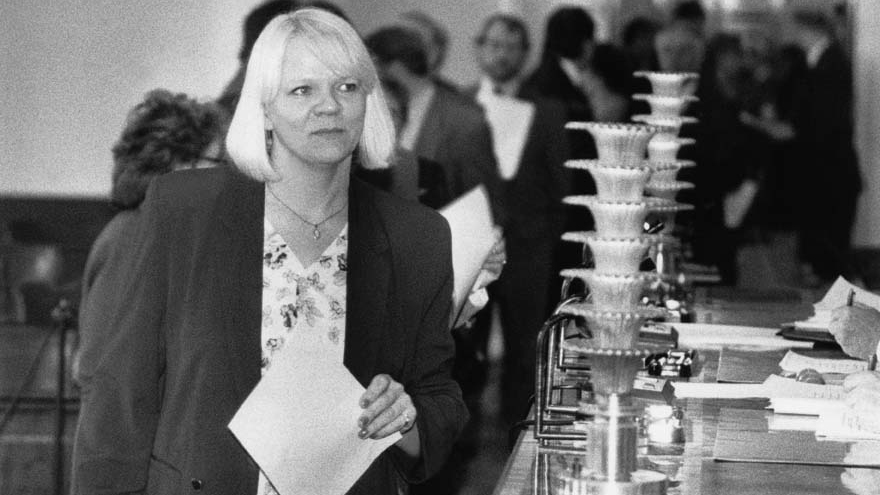 “It [being a minister] was a very rewarding time, I wouldn’t give up a single day of it. Since then I have followed national politics in a different way. I also have a more critical attitude to news coverage.”

Terttu Huttu-Juntunen was elected as a Member of Parliament in the mid-1990s and was immediately appointed as a Minister. Picture at Parliament, 27 March 1995. Veikko Koivusalo/The People’s Archives

Director of Social Affairs Terttu Aulikki Huttu-Juntunen unexpectedly rose to the post of minister during her first term in Parliament.

Huttu-Juntunen received a Bachelor of Social Sciences degree from the University of Tampere in 1981 and had a long career in the social welfare sector in various areas of Finland. She started working as Director of Social Affairs of Suomussalmi in 1983. She took part in activities of the Left Alliance and was a member of its party council in 1993–1995. Huttu-Juntunen held positions of trust for instance on the Advisory Council of Oulu Province, the Delegation of the Association of Finnish Local and Regional Authorities and the Board of the Development Fund of the Regional Council of Kainuu.

Huttu-Juntunen was elected to Parliament on her second attempt, in the spring of 1995. At the same time she was appointed Minister at the Ministry of Social Affairs and Health in the first Lipponen Government. Maintaining the Government’s regional balance and Huttu-Juntunen’s expertise in the social sector were factors underlying her selection.

As minister, Huttu-Juntunen took part in handling, for instance, the Social Assistance Act, expansion of the right to daycare and social security cuts. Equality issues and occupational health and safety issues were also Huttu-Juntunen's responsibility (she served as Minister at the Ministry of Labour in 1995–1997).

Following her term as minister, Huttu-Juntunen was not re-elected to Parliament, and she returned to her post as Director of Social Affairs in Kainuu. She retired and was granted the Finnish honorary title ‘sosiaalineuvos’ in the spring of 2015. Having left politics, Huttu-Juntunen has occasionally taken a stand in public on social sector issues, such as long-term unemployment and social exclusion of families.