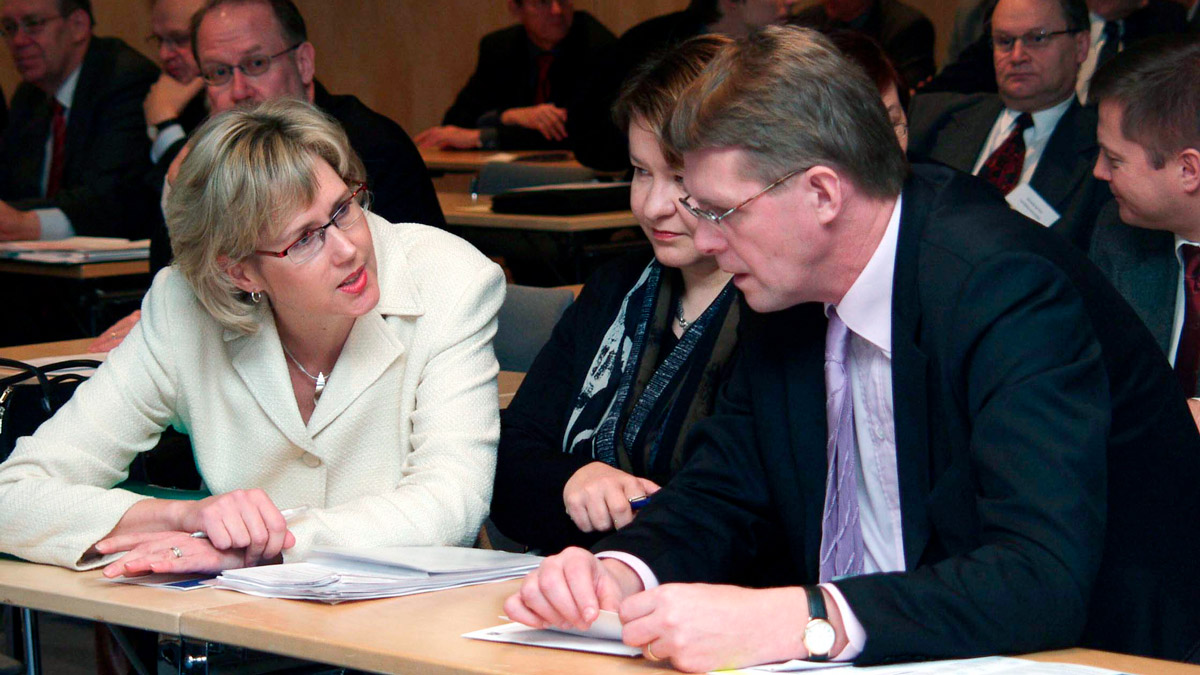 “I have always cringed at calling myself a politician. To me, politics is about doing things, living life. Over the years, however, I have grown into that role.”

Tuula Irmeli Haatainen is a long-serving Member of Parliament, who has also served as Deputy Mayor of Helsinki. Haatainen was the presidential candidate of the SDP in the 2018 presidential elections.

A registered nurse with a Master’s degree in Social Sciences, Tuula Haatainen started her career as a policymaker in university politics and civil society organisations. An active contributor to ‘Letters to the Editor’ pages, Haatainen was elected both to the Helsinki City Council and as the Secretary-General of Social Democratic Women in 1989. In the early 1990s, Haatainen served as Vice-President of the Socialist International Women (SIW). From 1995 to 2003, she chaired the Council for Gender Equality, participating in this capacity in the UN Fourth World Conference on Women in Beijing.

She initially took her seat in Parliament as a replacement for Reino Paasilinna, who was elected to the European Parliament in 1996. In the two subsequent elections, Haatainen won a large number of votes from Eastern Helsinki and was dubbed the ‘Queen of the Housing Estates’. Haatainen has served on the Employment and Equality Committee and the Social Affairs and Health Committee, and as Vice Chair of her parliamentary group.

Haatainen served as Minister of Education in the Cabinets of Prime Ministers Anneli Jäätteenmäki and Matti Vanhanen. When the Social Democratic Party shuffled its ministerial portfolios midway through the term of the Vanhanen Cabinet, Haatainen was entrusted with the responsibilities of the Minister of Social Affairs and Health. During her ministerial term, key decisions included voluntary participation in the second national language test of the upper secondary school matriculation examination, schoolchildren’s morning and afternoon activities and the Helsinki Music Centre. She also advocated for shortening the duration of studies and women’s quotas on the Boards of Directors of listed companies.

Having dealt with equality issues, Haatainen considered the achievements of Vanhanen’s government term to include the reform of the Equality Act to promote equal pay, increases in parental benefits and equalisation of the costs of family leave periods.

Haatainen was appointed as City of Helsinki Deputy Mayor for Education, Culture and Human Resources for the 2007–2012 period. In 2011, Haatainen was ready to stand as her party’s presidential candidate, but lost the membership vote to Paavo Lipponen. From the Deputy Mayor’s post, Haatainen was picked as Deputy Managing Director of the Association of Finnish Local and Regional Authorities in 2012. In 2015, she returned to Parliament to chair the Social Affairs and Health Committee. Haatainen was the Social Democratic Party’s mayoral candidate in Helsinki in 2017.

Haatainen was also the presidential candidate of her party in the 2018 elections. Haatainen received 3.2% of the votes. Soon after the elections, Haatainen became Second Deputy Speaker of Parliament.

Haatainen has held positions of trust in organisations such as the UN Association of Finland and the Federation of Mother and Child Homes and Shelters. In 2006, she published a memoir entitled Arjen kuningattaret [‘Everyday Queens’].

“I have always cringed at calling myself a politician. To me, politics is about doing things, living life. Over the years, however, I have grown into that role.” (Haatainen, Tuula: Arjen kuningattaret. [‘Everyday Queens.’] Gummerus, 2006, p. 19.)

“It has always been my starting point to talk with people. I’m not a celebrity candidate. But I guess people know me here [in Helsinki].” (Oksanen, Kimmo: ”Demareiden Tuula Haatainen pyrkii Helsingin pormestariksi – ’On tärkeää, että korkeissa viroissa on ihmisiä, joille lähiö- ja arkielämä on arjen kautta tuttua.” [‘Social Democrat Tuula Haatainen running for Helsinki Mayor – “It’s important to have people in top posts who are familiar with everyday life in housing estates through their daily lives’.] Website of the Helsingin Sanomat newspaper at hs.fi, 5 February 2017.)