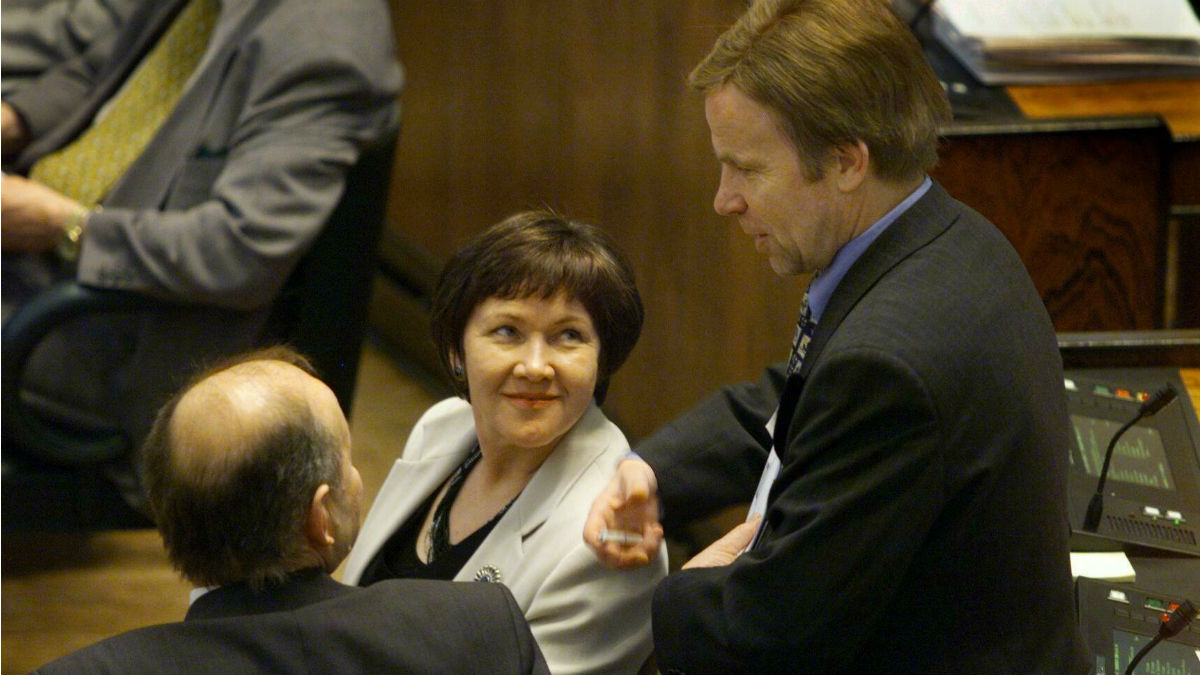 “I miss the fiery passion of years gone by. Expertise alone is not enough in an ideological movement.”

Tytti Isohookana-Asunmaa in Parliament with Markku Laukkanen and Mauri Pekkarinen (right) on 17 May 2000. Markku Ulander/Lehtikuva

Tytti Maria Isohookana-Asunmaa served as a Member of Parliament for the Centre Party for 20 years and has written several works on the history of her party and its influential figures.

Isohookana-Asunmaa worked as a lecturer of history and social sciences at the Oulu University Teacher Training School and earned her degree of Doctor of Social Sciences in 1980. Between 1982 and 1991, she worked as an acting Associate Professor of Social Sciences at the University of Oulu and wrote columns for the Kaleva newspaper. In addition to works exploring the history of the Agrarian Party, the Centre Party’s predecessor, Isohookana-Asunmaa has also published a collection of poems entitled Meren tuuli (‘The wind of the sea’, 2005) and a biography of Kerttu Saalasti, a prominent Agrarian Party figure (2008).

Isohookana-Asunmaa, who had sat on the Haukipudas Municipal Council since 1972, was elected as a Member of Parliament in 1983. She served on the Parliamentary Grand Committee, the Education and Culture Committee and the Environment Committee, as well as on the Finnish Delegation to the Nordic Council, among other positions. In the spring of 1987, she became Vice Chair of the Centre Party Parliamentary Group. Isohookana-Asunmaa served as Minister of Culture in Prime Minister Esko Aho’s Cabinet, which included seven female ministers – more than any previous Cabinet.

Serving as Minister of Culture during a period of recession, Isohookana-Asunmaa initiated several reforms. One of the most well-known is the reform of the system of artists’ grants, where State Prizes were replaced with Finland Prizes and the duration of grant periods was cut from 15 to 5 years. She prevented cuts in state appropriations for libraries and contributed to the reform of the student financial aid system.

In addition to several other positions of trust, Isohookana-Asunmaa chaired the Board of the Martha Association from 1996 to 2003. In 2003, the Hungarian Ministry of Culture rewarded Isohookana-Asunmaa for her work on behalf of the Csango minority. That same year, she stepped down from Parliament, returning to the University of Oulu. After her political career, she continued to pursue historical research and contribute to public debate.

The type of language used on the Radiomafia youth radio station was a hot topic in Parliament in the 1990s. Minister Tytti Isohookana-Asunmaa, appearing on YLE’s TV news on 6 October 1994, answers a question put to her by an MP at 01:16 minutes.