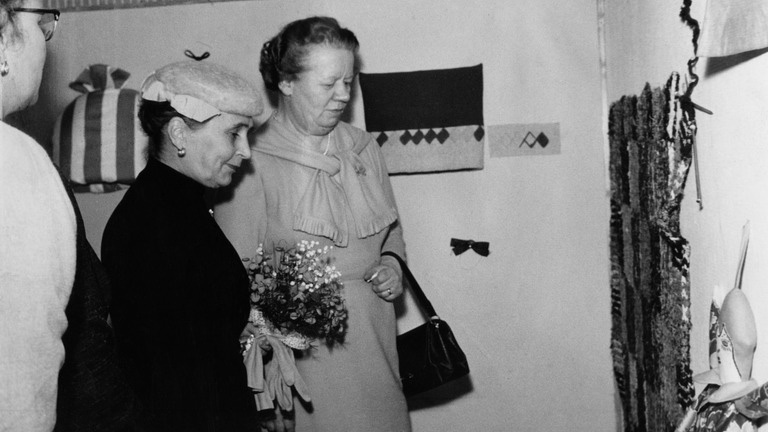 Tyyne Leivo-Larsson served in five different governments in the 1940s and 1950s. She was the first woman in Finland to deputise for the Prime Minister.

Minister Tyyne Leivo-Larsson (on the right) and Mrs Sylvi Kekkonen in 1950 learning about products sold by Elanto stores. The Labour Archives

Tyyne Lilja Leivo-Larsson served as Minister of Social Affairs in five different Cabinets. She was Finland’s first female ambassador and the first woman to deputise for the Prime Minister.

Tyyne Leivo-Larsson was a daughter of a mason, whose aspiration for self-improvement was kindled when she was admitted to secondary school. She worked as an office assistant at various companies and as an office manager at the Finnish Trade Union Federation (SAJ), where she met trade union people and became interested in politics. While working, she studied at the Civic College, focusing on languages, and learnt Swedish, German, English and Esperanto. After the Federation was discontinued, Leivo-Larsson moved on to become an office clerk at Helsinki City Treasury. She was managing the State’s permanent industrial safety exhibition when she was first elected to Parliament in 1948.

Working in women’s organisations was important to Leivo-Larsson throughout her career, and she networked with societally active women across party lines. In addition to the trade union movement, she was involved in the Social Democratic Youth League of Finland (SSN), the Finnish Labour Women’s Alliance (Chair as of 1946) and in Helsinki’s local politics.

In Parliament, Leivo-Larsson served on the Parliamentary Banking, Labour and Foreign Affairs Committees and on the Finnish Delegation to the Nordic Council. She sat in five different Cabinets, either as First or Second Minister of Social Affairs, being the third woman in Finland to hold a ministerial role. Leivo-Larsson was involved in drafting or implementing the social housing production system known as ARAVA, a national pension reform and legislation governing seafarers and earnings-related pensions, among other things. She supported equal pay and paid maternity leave, proposing various improvements on women’s status. Leivo-Larsson also represented Finland in bodies such as the UN and ILO General Assemblies.

Within her Social Democratic Party, Leivo-Larsson was elected to the Party Executive Committee and as Chair of the Social Democratic Women’s League. As a left-wing supporter of Emil Skog, however, she was expelled from the party along with the rest of her branch in 1958. With support from President Urho Kekkonen, she served in Prime Minister Reino Kuuskoski’s non-partisan caretaker government as Second Minister of Social Affairs and deputised for the Prime Minister, which was an unprecedented role for a female politician. In the middle of the government term in 1958, President Kekkonen nominated Leivo-Larsson as Ambassador to Oslo and, later on, to Reykjavik as well.

After returning to Finland in 1965, Leivo-Larsson joined the Social Democratic Union of Workers and Smallholders (TPSL) and was re-elected to Parliament once more for the 1966­–1970 term. She chaired both her parliamentary group and the TPSL Women’s League.

Leivo-Larsson was elected as presidential elector for three elections and served on the Finnish Delegation to the UN General Assembly and the Advisory Board for Development Aid. She also served as Deputy Chair of the Helsinki City Council from 1948 to 1957. In 1970, Leivo-Larsson wrote a memoir entitled Elämässä tapaa ja tapahtuu (‘Life’s encounters and events’).

“My political activities have enriched my life in many ways. They have taught me how much people will sacrifice if they have to defend their ideological convictions, and whenever your life is under threat for ideological reasons, you also have the chance to understand what ideological activities and the entire circle of comrades means for each and every one of us.” (Eskelinen, Heikki [ed.]: He edustavat meitä. Kansanedustajat kertovat itsestään. [‘They represent us. Our MPs talk about themselves.’] WSOY, 1966, p. 189.)

“Alongside respect for universal humanitarian principles, a sense of duty and a desire to defend the democratic form of society, including human freedom as its essential element, are the principles on which I have aimed to build my world view, my actions in all areas. That I have not always managed to adhere to my ideals is another story, but at least the goal is there.” (Eskelinen, Heikki [ed.]: He edustavat meitä. Kansanedustajat kertovat itsestään. [‘They represent us. Our MPs talk about themselves.’] WSOY, 1966, p. 189.)